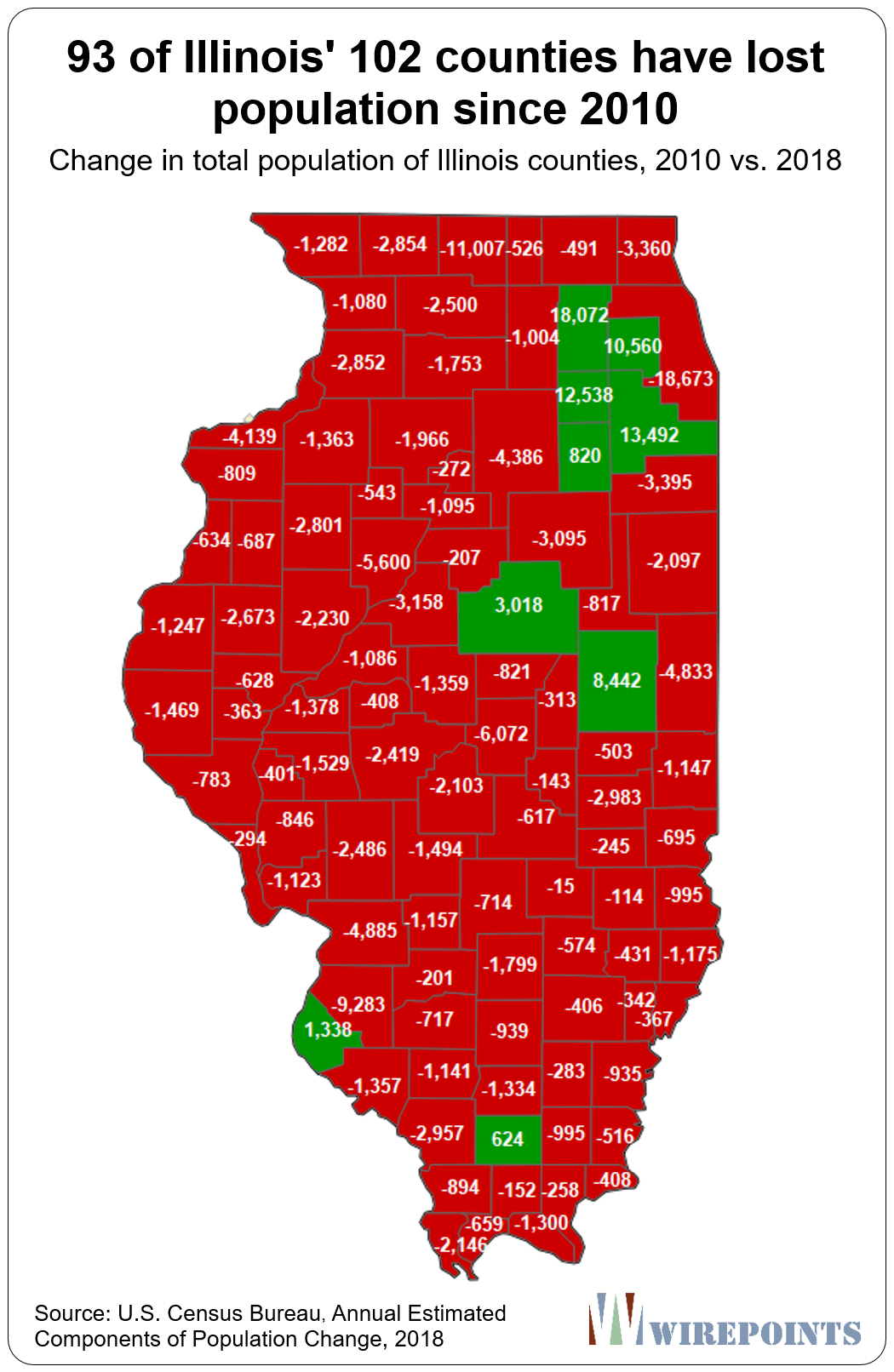 Illinois has lost more population than any other state in the country and it was one of just four states to shrink since 2010. The other three states were West Virginia, Connecticut and Vermont. By comparison, states like Indiana added 200,000 to its population, while fast growing states like Tennessee and South Carolina added more than 400,000 each. Florida, Texas and California have added millions to their populations since 2010.

Illinois’ population loss across so many counties is a reflection of the state’s outlier status on many of the nation’s economic, demographic and financial metrics. Illinois has the nation’s most costly pension crisis, one of the highest tax burdens, falling real home prices and a general lack of economic opportunity. It’s also one of the most corrupt states in the country.

At the other end, only nine of the state’s 102 counties managed to gain population over the period. Kane County grew by 18,000, largely offsetting Cook County’s losses. Another collar county, Will, gained 13,500. Kendall County was next with an increase of 12,500.

The only other counties to show growth were DuPage, Champaign, McLean, Monroe, Grundy, Williamson – just nine counties in all.

Collectively, Illinois’ downstate counties have suffered the worst loss of population, by far. The whole region lost nearly 120,000 people between 2010 and 2018 – more than 2.5 percent of its total population.

However, that increase was largely at the expense of Cook County. Previous migration data shows many new collar residents come from Cook County.

A 0.4 percent loss may not sound like much, but compared to the nation’s largest counties, Cook County is an outlier. Wirepoints analyzed the population change for the nation’s 50 most populous counties and found that Cook was one of just seven counties to lose population since 2010.

Think whatever you want about Illinois politics, but it’s being categorically rejected year after year by far too many residents.

Until the state’s policies are flipped on their head – until Illinoisans finally get the big pension and spending reforms the state desperately needs – expect many more to uproot their lives to find opportunities elsewhere. 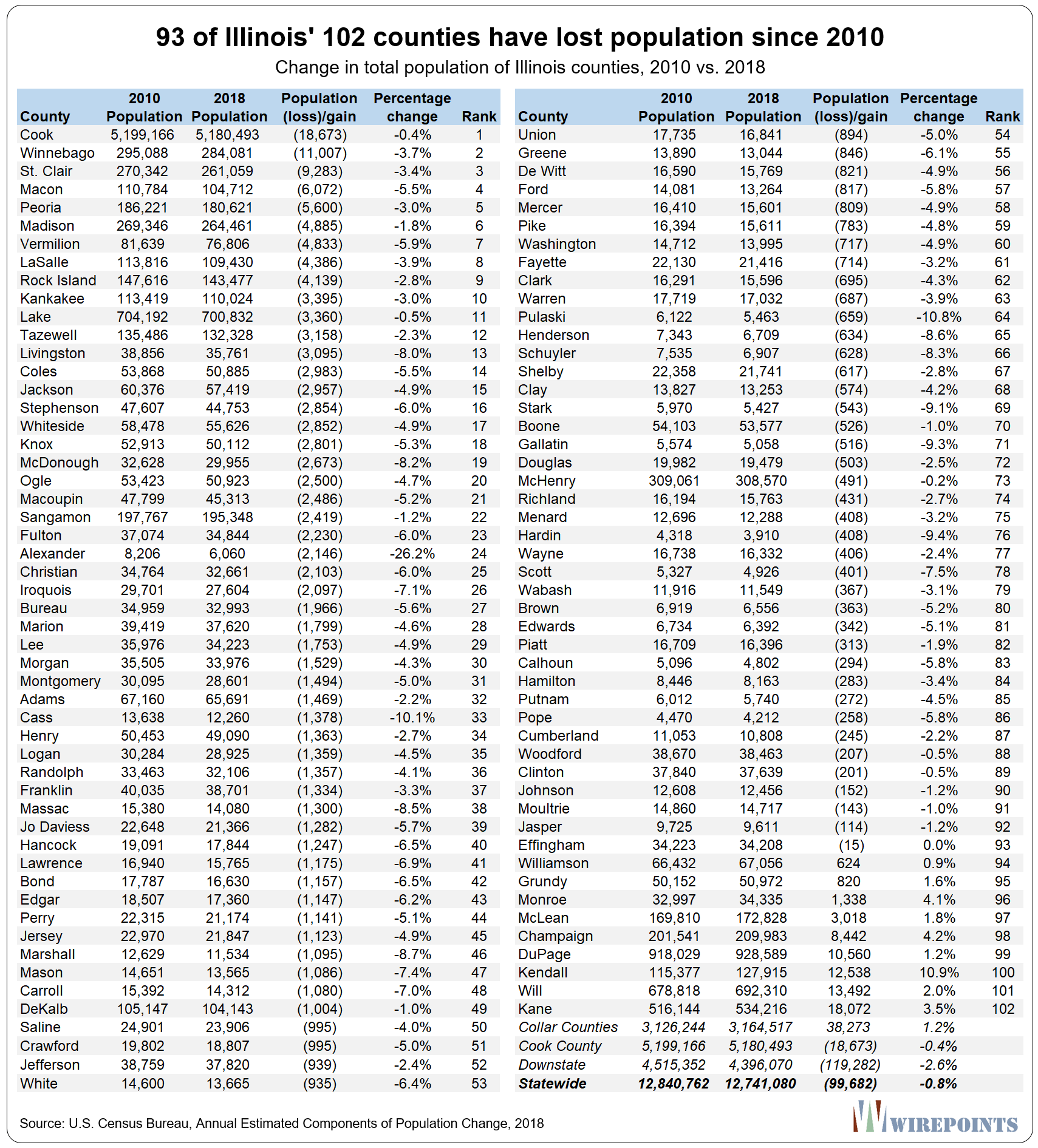 Ask the people who left if they would move back?
Best day of your life is the day the movers show up at your house.
Let the cops, teachers and Firemen pay be the last ones in the state.
Oh that’s right, they all move to Florida to buy large homes, nice cars and go out to dinner on Illinois taxpayers money. Nice to retire at age 45 with a HUGE PENSION and 3% Increases every year.

How does university enrollment count towards population? For example, if I’m a student from China attending UIUC, am I included in Champaign County’s population count? I ask because UIUC enrollment was up about 10,000 last decade and they’ve been importing a ton of Chinese students.

Traditionally conservative Kane County is being diluted by all the former Chicago residents moving out there. So sad. They are fleeing Chicago but they are bringing their voting patterns with them.

I live in kane. I hope the former chicagoans realize the danger of recreating the same mess in kane county

Just remember the smart money is always gone first, what’s keeping you in Illinois? And can it be replicated elsewhere? The answer is a resounding yes. Illinois is not special in any way shape or form, in fact its one of the worst places to live in the entire united states if you’re a productive citizen. Go somewhere else where your hard work will be appreciated and you get to keep more of your hard earned dollars to spend as you see fit, not some corrupt politician!

Problem: Illinois Political Industry seeing record profits because of taxpayer apathy and ignorance. How do you save yourself, as an exploited taxpayer? One can argue that if the system is promoted by the Illinois Political Industry as good for all citizens, t should be good for all citizens to participate in. Here is a suggestion: most of Illinois is unincorporated. 1. Form municipalities with charters very restrictive on elected officials’ abilities to issue public debt. 2. Create TIF District including every property in town, reimburse every property owner their TIF incremental payment annually to ameliorate their own blight. . NEW… Read more »

Residents are unnecessary to the continued profitability of the Illinois Political industry.

Crashing real estate values are a victory in itself. When income producing properties can be crammed down in value due to high taxation, Political Industry insiders can purchase this distressed real estate at deep discounts. They can be loaned the leveraged pennies on dollars for these purchases by insider Political Industry banks, who are given 35-1 leveraged money from Fed Reserve.

There can be no solutions to a problem which isn’t a problem—it is an opportunity— for the Political Industry which is orchestrating this scenario.