Local officials and union leaders have employed a near-perfect method to pressure residents into accepting higher taxes year after year: Sell the idea that communities around them are more generous than their own.

To do that, they consistently point to neighboring communities’ higher salaries, benefits and programs to justify additional spending, then push their own residents into accepting higher taxes to pay for that spending. And if that’s not enough to make the sale, the threat of strikes and binding arbitration only builds additional pressure.

It’s the game politicians and union leaders play to get their way on salaries, whether it’s mayors in Rockford, police in Hoffman Estates or teachers in Waukegan.

It all adds to an upward spiral in spending that’s left Illinoisans paying the highest property tax rates in the nation.

To see how the game works in practice, take Wilmette School District 39 and its efforts to raise its property tax levy to the maximum extent this year.

School district officials recently shared a graphic that compared the per-student spending of District 39 to that of nearby elementary districts – most of which spend more.

While officials like to claim they’re being efficient, the implicit message they send to Wilmette residents with such an image is simple: The district needs to raise taxes because it doesn’t spend nearly as much as most of its neighbors. 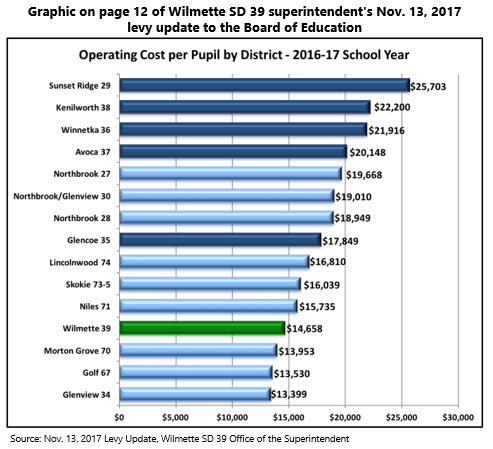 It’s the same strategy the district used successfully in 2011 to get residents to support a $6.4 million property tax referendum. Proponents of the tax hike stoked residents’ worries by warning of declining property values and cuts to school programs if the district failed to keep up with its neighbors.

But comparing only spending per student across different districts is purposely misleading. It ignores the differences between communities that can affect how much a district spends – for example, how much property wealth each community has.

Below is the chart district officials should have shown along with the graphic they presented. It shows that Wilmette has significantly less property wealth, on a per student basis, than a majority of its neighbors. It’s the major reason Wilmette spends less. 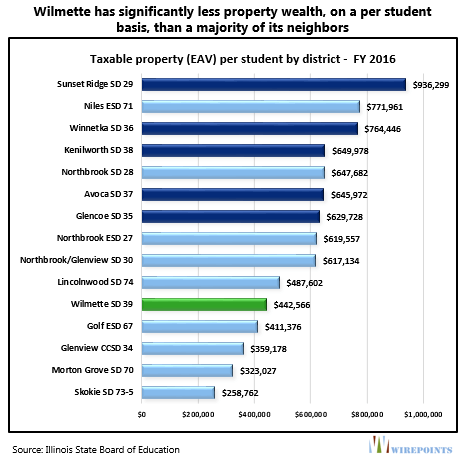 And Sunset Ridge, which spends nearly double what Wilmette spends per student, has more than double the property wealth per student.

There’s a very strong correlation between how much property wealth a district has and how much it spends. So it’s not surprising those districts spend much more than Wilmette.

Wilmette is but one of the many local governments across Illinois that justify additional spending this way, whether they be cities, libraries or public safety districts.

Municipal officials do residents a disservice by comparing spending without looking at what their communities can afford. By pushing property taxes higher than the market can bear, communities are being damaged.

In some places, like in Chicago’s struggling south suburbs, sky-high property taxes are destroying the equity in people’s homes and driving them out of their communities. In others, like Wilmette and other wealthier suburbs, higher taxes threaten to drive people out as property taxes get out of line with property values.

The same game is played when police and fire compensation is negotiated in cities across the state. Unions consistently focus on neighboring communities’ salaries rather than what taxpayers in their own community can afford.

And even if some cities and local officials want to be responsible to taxpayers and focus on affordability, binding arbitration laws effectively mandate that comparisons be made across communities. City officials are forced to consider the risks of arbitration with every negotiation – and inflate their offers accordingly.

As the Daily Herald pointed out in its investigative article on the impact of public safety salaries on neighboring communities: “[Higher] salaries not only cut into funds for other municipal services, but increase pension liabilities, reduce police staffing levels and affect neighboring communities’ abilities to hold the line on police salaries when they are negotiating.”

The net effect is that public salaries have risen much faster than the salaries of the residents who are required to pay for them. Schaumburg, for example, has seen its public safety salaries grow more than 30 percent over the past decade. That’s three times faster than the growth in private sector earnings, which have stagnated over the period.

It’s the same story in Rockford and Peoria and cities across the state. Public safety salaries have grown multiple times faster than salaries in the private sector.

The practice of basing public sector salaries on neighboring communities’ pay – rather than affordability – is now bankrupting Illinois cities as pension benefits jump. It’s having the perverse effect of harming the very public safety workers that officials and union leaders represent.

Both work security and retirement security for public safety workers are taking a beating. Cities are cutting back on workers and hours to make payroll and pension payments. And many pension funds are nearing total insolvency.

Property taxes and the need for new labor laws

Those higher property taxes are hurting everybody.

Punitive state labor laws and a lack of real transparency rules have resulted in less job and retirement security for government workers. Excessive state mandates, including one-size-fits-all pension rules, have created liabilities and exploding costs that taxpayers can’t afford. And they’re crowding out funding for services that Illinois’ most vulnerable residents rely on.

The only way to end the game that officials and union leaders play is to stop enshrining government workers’ ability to strike, to stop requiring forced arbitration that’s removed taxpayers from the negotiating table, and to require full transparency during local government contract negotiations.

Cities also need the ability to create 401(k)s and the option to declare municipal bankruptcy. For many local governments, bankruptcy will be the only option that both protects retirees and allows cities to reorganize their debts.

If nothing is done, Illinois officials will soon have a new way to measure up to one another. They can compare just how many of their residents have left to find better opportunities and lower taxes elsewhere.

But this shows “Operating Costs per Student”, not “spending per student”, correct? These are very different things. I would prefer a District with low per student operating costs (less admin, efficient buildings) with more money going toward the classroom. The statistics presented by the parties to gain are indeed misleading. Moreover, as the evidence shows, spending per student is not directly correlated with results or educational attainment.

The high property taxes are paired with high teacher and administrator state pension debt. Illinois is a nationwide leader in both categories. Per the TRS GASB 68 Actuarial Valuation report as of June 30, 2016 by Segal Consulting, the TRS unfunded liability for the 15 school districts in the article is $1,495,174,279. The unfunded liability data per school district is found here: http://www.trsil.org/financial/gasb-68-actuary-reports Exhibit E – Schedule of Pension Amounts by Employer as of June 30, 2016. Find the columns for “Net Pension Liability” and “Employer’s Share of state’s Current Year NPL for RSl, per Paragraph 81.” Both columns for… Read more »

Here is a cross reference chart to the previous two TRS GASB 68 Actuarial Valuation reports for FY 2015 & FY 2016, which were produced by Buck Consultants division of Xerox. As mentioned in the previous comment, the reports are located here: https://www.trsil.org/financial/gasb-68-actuary-reports First, the name of the chart changed. Exhibit E (Schedule of Pension Amounts by Employer as of June 30, 2016) = Section 3.1 (Summary of Results by Employer and State of Illinois). Next, the columns in the chart. FY 2015 Report: Net Pension Liability = Current Net Pension Liability at Current Discount Rate (7.47%). Employer’s Share of… Read more »

When you start adding up lost $16 million years,plus the missing money that is supposed to be made by investing that theoretical yearly $16 million it adds up to an impossible to replace amount.I think it’s actually crossed that rubicon.

I believe the Fed is currently reducing it’s balance sheet in order to absorb future “pension bonds” to it’s balance sheet from failed pension funds.Never forget that politicians and judges count on these pensions too.They will take the shirt off of yours and my back to make themselves whole.

The perfect counter measure for the taxpayer, release the employee so he/she can go work for the other community right away. Thank you, have a blessed Thanksgiving.

In a related vein, the mayor of my south suburban hellhole justified buying aldermen (base salary $32,500 PLUS longevity, expense accounts and stipends PLUS committee pay!)
home computers because they don’t have offices in city hall! Poor things!