For ordinary residents, the costs of being one of the nation’s worst-run states are many. Illinois is the country’s best example of how those costs bear out, though a few other states like New Jersey and Connecticut come in close second.

Illinoisans are burdened with some of the highest taxes in the country – including the highest property taxes – as a result of paying for the nation’s biggest pension debts. Illinoisans’ home values have suffered one of the nation’s worst declines. And residents are being stuck with ever-larger tax bills as more and more people flee. Since 2010, Illinois’ population has fallen by 170,000 people – more than any other state.

But if you’re looking for a more tangible example of how Illinois’ deadbeat status impacts ordinary residents, think of the mess like a mortgage. The worse your credit score, the higher your interest rate. It’s that simple. When your credit score gets really ugly, your interest costs skyrocket, eating into your ability to pay for other key things, like groceries, car payments and education.

It’s the same thing with states. States with the best credit scores – rated AAA by credit rating agencies like Moody’s – pay far less to borrow, leaving more money for core services. The best-rated states include our next door neighbors Missouri, Indiana and Iowa and also states like Georgia.

Take the recent case of Georgia, for example. The state just borrowed $1.1 billion at an average cost of 1.5 percent for a mix of borrowings between 5 and 20 years. That interest rate was the lowest ever for the state, a combination of low overall interest rates and Georgia’s perfect credit.

Compare that to Illinois, which has the nation’s worst credit rating when it comes to states. The state’s rating sits just above junk, a level no state has ever fallen to. (See below for each state’s ratings.)

Illinois’ problems forced it to borrow $1.2 billion from the Federal Reserve in June, after the state abandoned its attempts to borrow directly from the financial markets. To date, Illinois is the only state to tap the Fed’s borrowing program, meant to be a last resort for states. All other states continue to successfully borrow from the markets.

Prior to that, Illinois did manage to borrow $800 million from the markets in May, but it had to pay an exorbitant price for the money – far higher than any other state in the country. The state borrowed at an interest rate of 5.65 percent, four percentage points higher than Georgia (5.65 percent vs. 1.5 percent).

That will cost Illinoisans an extra $330 million compared to what it cost Georgians, assuming an average life of 10 years for the bonds. And that’s just for $800 million. Illinois pays a penalty every single time it borrows, meaning less money for education, health care and roads.

At a time when interest rates are at record lows, when federal money is flowing like water, when other states are paying rock bottom prices – Illinois is paying the highest penalty rates ever. It’s something to remember when Illinois politicians promote the next tax hike.

Hiking taxes isn’t the solution to being the financial deadbeat. Getting your costs under control is. 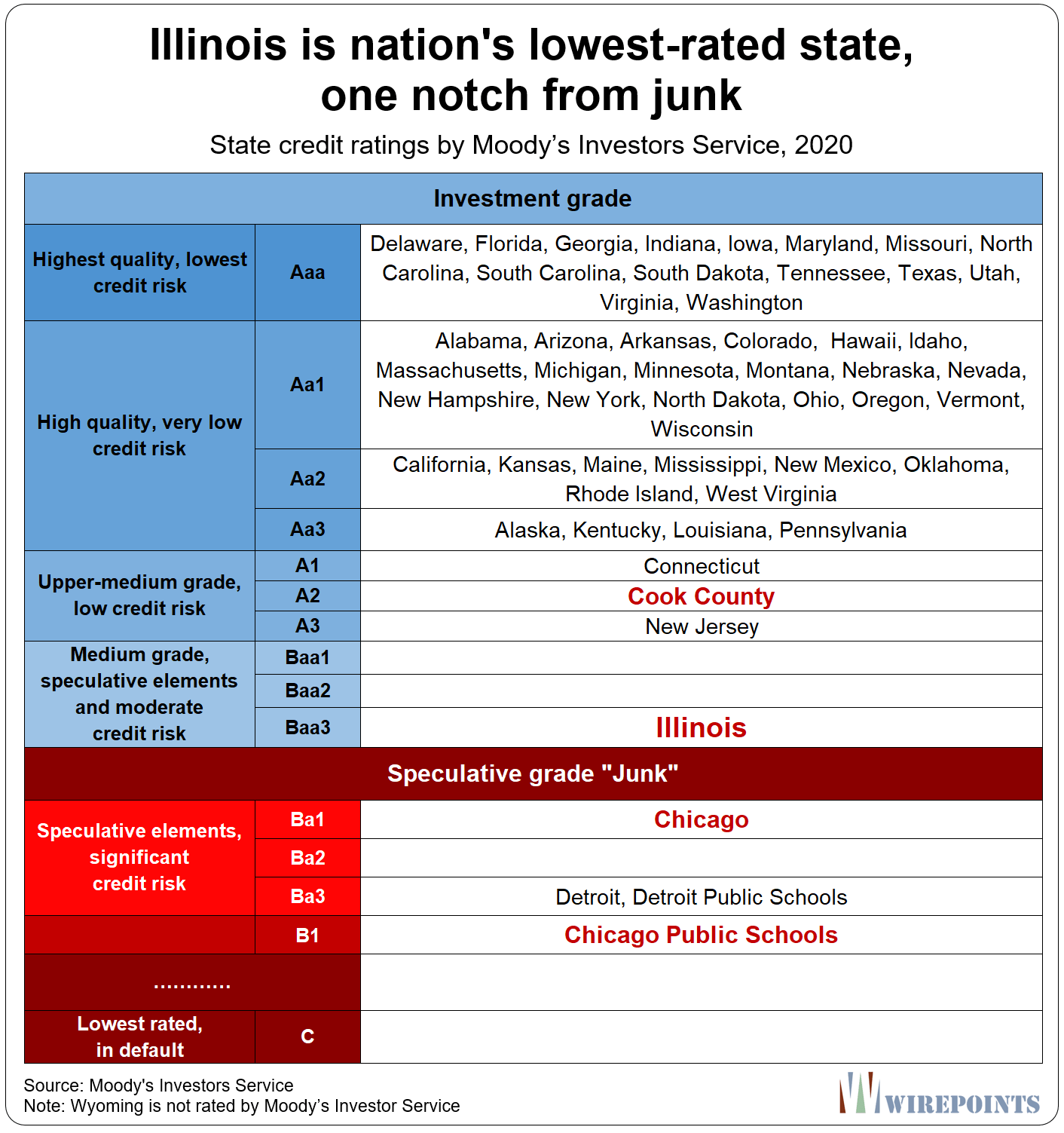 Illinois and Chicago do not stand a chance.
Greed has destroyed it for good.
DOA, a goner. No hope for life.

Maybe, instead of spending millions on ads hyping his progressive income tax, Gov. Toilets could cover some of that extra interest.

And, this very moment, JB is on TV wallowing in his own filth… Ooops, I mean discussing COVID restrictions and lockdowns and whatever his HIGHNESS wants. Abe Lincoln would be roling over in his grave if he could hear the drivel coming out of his generous jowels.

And we wonder why it costs a few hundred percent more to issue debt.

All in the name of protecting workers and slowing the spread…. Ya’ know, since we no longer try to flatten the curve.

The only things that will save IL is if the pandemic keeps going on and the federal government bails out the state or if there is super high inflation that magically erases the debt or some sort of combination of the two.

1
Eugene on a pay phone
Reply to  isblankonpurpose

Traditionally, inflation is a result of increased government spending. A Federal bailout of deadbeat states would create a larger problem for everyone as a flood of newly printed money cheapens the value of existing money. Some living breathing humans must eventually suffer a loss to balance the books. Let’s limit the damages to the people who voted for this nonsense election after election.

It’s too bad the giant wall and landmines around Illinois prevents escape. It’s unfortunate Illinois is in the United States where there is no freedom. Americans can only imagine a land based upon freedom where individuals are permitted to search for happiness. Illinois residents are truly trapped victims with no means of escape. We should all feel sorry for them.

3
PlanningAnExit
Reply to  Mick the Tick

0
PritzkersConscience
Reply to  Mick the Tick

Sadly, some folks are stuck in Illinois because they can’t afford to take large losses on their property.

0
Mick the Tick
Reply to  PritzkersConscience

Either take a moderate loss now or a massive/total loss later. Unfortunately, that’s the choice.

I agree in part. Those voting for this on a regular basis are recipients of what they are voting for. Union members and their families comprise a large voting block. Those on food stamps/Medicade/or any takers of state aid also vote for this. Political boundaries insure pols stay in power. Unopposed candidates comprise at least 50% of all offices on the ballot. It is definitely stacked in their favor. Hopefully all these tax’s (22 at least) raised immediately may be fresh on the minds of voters but when in the voting booth and it says unopposed how do you vote… Read more »

Could Mike the Leprechaun resign retroactively?

Could not pay me enough interest to lend (give) Illinois money.
Nothing but a illegal Ponzi scheme.
Illinois is junk status because it is JUNK.
The Greed of the cops, teachers and firemen have destroyed the state.
There is no longer any opportunity for the honest hard working taxpayer and their children
Move out ASAP, best day of your life.
Illinois “Land of Slavery”