By: John Klingner and Ted Dabrowski

Fitch Ratings has downgraded Illinois’ credit rating to BBB-, one notch above junk, in response to the continued negative impact of the Coronavirus and Illinois’ already-tenuous financial position. It also assigned a negative outlook to the state, meaning another downgrade is likely as the pandemic continues.

The agency warned it will be difficult for Illinois to avoid a junk rating: “While Illinois should avoid any immediate cash flow pressures, the state’s lack of meaningful reserves and the limited nature of other fiscal-management tools at its disposal mean Illinois will be challenged to maintain its investment-grade [rating].”

All three major credit rating agencies now rate Illinois just one notch above junk status and have assigned a negative outlook to the state (see appendix for each agency’s rating outlook). If any of the three follow through and downgrade the state again, Illinois would be the first state in the nation to ever be rated junk. 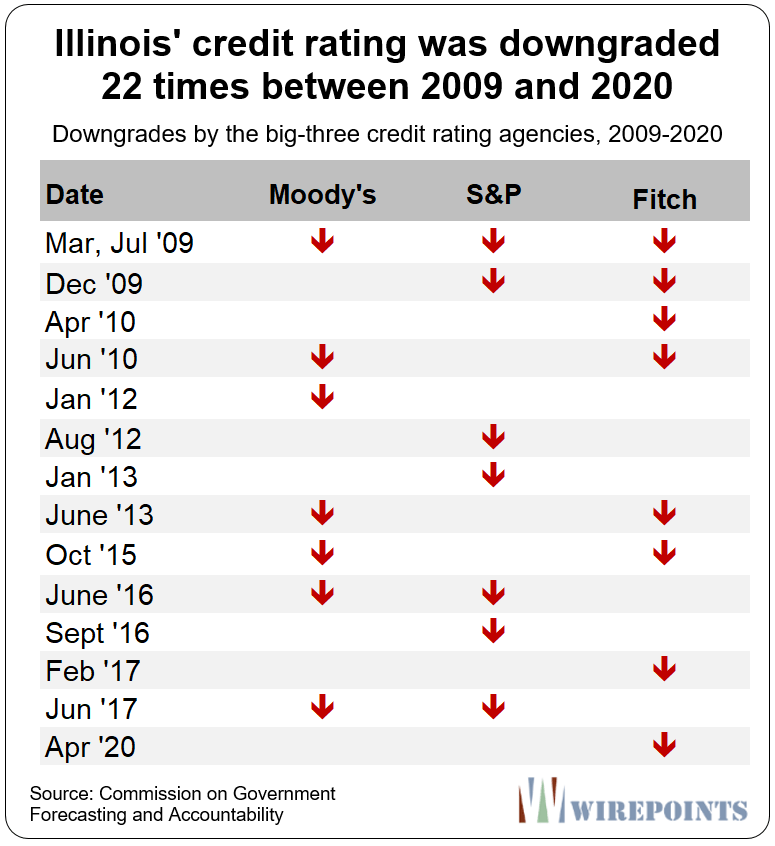 In its release, Fitch warned against “a reliance on short-term measures that materially compound the state’s long-term challenges such as its pension liability burden.”

Fitch also said that a downgrade to junk is more likely if the economy doesn’t experience a quick recovery. The agency’s “baseline scenario anticipates economic recovery beginning in the second half of 2020. Should the downturn extend well beyond that point…the state’s long-term economic growth prospects could be fundamentally weakened from an already modest level. This would pressure all aspects of the state’s credit profile.”

The bond markets are already pricing Illinois bonds at interest rates that amount to junk-level yields.

In 1990, Moody’s rated Illinois’ credit AAA. Since then, Gov. Jim Edgar passed his infamous pension ramp, Gov. Rod Blagojevich issued $10 billion in pension obligation bonds, Gov. Quinn followed suit with his own $7 billion in bonds, as well as a 67 percent temporary income tax hike, and Gov. Rauner oversaw a permanent $5 billion-plus tax hike. None of those can-kicks worked – they only led to a string of downgrades from all three agencies. Lawmakers consistently rejected structural reforms and Illinois was left with a rating just one notch above junk by 2017.

Now the Coronavirus has hit and the state is facing the consequences of having avoided reforms for so long – the bond market’s reaction is evidence enough of that.

The lesson for Illinois’ political elite is that can-kicks can only work for so long.

The downgrade of Illinois’ IDR and GO bond ratings to ‘BBB-‘ from ‘BBB’ reflects Fitch’s anticipation of a fundamental weakening of the state’s financial resilience given its already tenuous position entering the current severe downturn. While Illinois should avoid any immediate cash flow pressures, the state’s lack of meaningful reserves and the limited nature of other fiscal-management tools at its disposal mean Illinois will be challenged to maintain its investment-grade IDR.

Illinois’ ‘BBB-‘ IDR and GO bond ratings, well below the level of other states, have long reflected an ongoing pattern of weak operating performance and irresolute fiscal decision-making that has produced a credit position well below the level that the state’s broad economic base and substantial independent legal ability to control its budget would otherwise support. The ratings also reflect the state’s elevated long-term liability position, modest long-term economic and revenue growth profile and adequate expenditure flexibility.

The Outlook revision to Negative reflects the risk that the depth and duration of the downturn lead Illinois to implement nonstructural budget-management measures the state finds difficult to quickly unwind once an economic recovery finally begins to take hold.

Factors that Could, Individually or Collectively, Lead to Positive Rating Action/Upgrade:

Substantial Federal Intervention: Further timely and substantial federal action which offsets the likely deep economic and revenue declines the state will face over the next few months could support stabilization of the Outlook. This could take the form of significant direct aid for revenue losses or sufficient economic stimulus that supports a rapid rebound in economic activity.

Rapid and Significant Fiscal Rebound: A quick recovery in the state’s economic activity and revenue collections could support stabilization of the Outlook by allowing the state to preserve financial resilience and avoid materially exacerbating its structural budget challenges. Such a recovery would be well beyond Fitch’s current expectations. Similarly, structural changes that lead to materially higher revenues or reduced spending and do not exacerbate Illinois’ structural budget challenges could also support stabilization of the Outlook.

Factors that Could, Individually or Collectively, Lead to Negative Rating Action/Downgrade:

Deeper and Sustained Structural Imbalance: Fitch anticipates Illinois will actively manage fiscal challenges in the near-term with nonrecurring measures such as growth in accounts payable. A downgrade could be triggered by the lack of a credible path to reversing those measures quickly, once an economic recovery finally takes hold, or by a reliance on short-term measures that materially compound the state’s long-term challenges such as its pension liability burden.

Extended Economic Decline: Fitch’s coronavirus baseline scenario anticipates economic recovery beginning in the second half of 2020. Should the downturn extend well beyond that point, even if for Illinois alone, Fitch’s assessment of the state’s long-term economic growth prospects could be fundamentally weakened from an already modest level. This would pressure all aspects of the state’s credit profile.

Revision of the state’s outlook to negative from stable aligns with our view of the likely effects of the coronavirus pandemic, which will reduce tax collections and likely cause substantial current-year pension investment losses, both of which will weigh more heavily on Illinois, given its existing weaknesses relative to other states. Federal government support will mitigate some of the direct budgetary burden, but the state will face liquidity pressures that may lead it to near-term actions such as adding to its balance of unpaid bills. The state is also more likely to take actions that add to long-term liabilities, in view of impending revenue shortfalls, growing health and social burdens and pension fund investment losses.

Moody’s warned of the factor that could take Illinois into junk:

“The negative outlook reflects our anticipation that there is at least a one-in-three chance that economic conditions worsen to a degree that affects the state’s ability to maintain credit characteristics in line with the investment-grade rating level,” said S&P Global Ratings credit analyst Geoffrey Buswick.

We will be watching to see if the stimulus as currently allocated is sufficient for Illinois to fight the COVID-19 pandemic; if the anticipated growth in the bill backlog does not create service delivery problems; and if the current market volatility worsens the funding status of the already poorly funded pension plans. Over the intermediate term, we believe that the state will need to take further action to achieve sustainable structural balance and address its pension liabilities to maintain an investment-grade rating.

In addition, the rating reflects our view of governance risks that we view as being above the sector norms due to the constitutional limits the state faces to modify its growing pension costs, and that the state is not contributing to meet static funding, limiting current and future budgetary flexibility. However, we view the state’s environmental risks as in-line with our view of the sector. Our outlook revision also reflects our view that the COVID-19 pandemic’s impact on the state’s economy, budget, and forecast is a social rating factor elevating the public health and safety issues. If economic activity resumes, however, and credit metrics are upheld, we could revise the outlook to stable.

The sad part about this downgrade is that it will attract more investors (vultures) to the high yields. They all know full well their investment is safe because politicians here will sell the citizenry into servitude for them. The rating agencies need to be class action sued by Illinois residents. They are in full collusion, soon pritzker will have “lunch” with a rating agency, to find out exactly how much he should shaft the taxpayers to keep them happy and keep the Ponzi afloat. Just you watch, these agencies and the politicians and the bond vultures will together screw us… Read more »

Illinois, Chicago and most other Illinois cities should have a -ZZZ bond rating.

A war is coming. It will be fought between everyone the state owes (or promised) money. The different unions/banks/organizations will start to see each other as the enemy as they fight for their share. Wirepoints won’t need to scream alone in the wind about the Illinois math not making sense. It will finally be well known as the unions argue their case in the press. The press will probably actually increasingly quote Wirepoints. The state leaders will shrug and deflect blame. The truth will finally be common knowledge simply because the ponzi scheme had no more suckers. The lenders will… Read more »

I think most people (that have a functioning brain) would agree with you.

4
Fed up neighbor
Reply to  DantheMan