After years of credit downgrades that pushed the district’s rating to B3, deep into junk territory, Chicago Public Schools finally got a one-notch upgrade to B2 from Moody’s Investors Service. The ratings affect $4.8 billion of debt and are the result of “the district’s improved liquidity position.”

Expect Mayor Rahm Emanuel to sell that as good news, even if a B2 rating is still junk (the district needs upgrades totalling five notches just to get rid of the junk label.)

Never mind that the credit upgrade itself wasn’t the result of any real efforts by CPS to improve its finances through restructurings or spending reforms. Instead, any improvements came on the backs of taxpayers, mostly those outside of Chicago.

CPS was the big winner in the latest negotiations over school funding and pensions. It got a state bailout worth $200 million-plus that included a state payment of CPS’ normal costs going forward and even more from the state’s new education funding formula.

The legislature also granted the city additional power to hike property taxes so the district can keep plugging its multi-billion pension hole. Sure, those tax hikes might help CPS finances in the short-term, but higher taxes now and the real expectations of even more hikes in the next five years will only shrink the tax base.

And the reality is more money from state coffers and city homeowners just opens up the door to more spending by CPS and the mayor. Already, Emanuel and school officials have announced a $1 billion capital spending program, despite the fact that CPS attendance has shrunk by 15 percent since 2000. 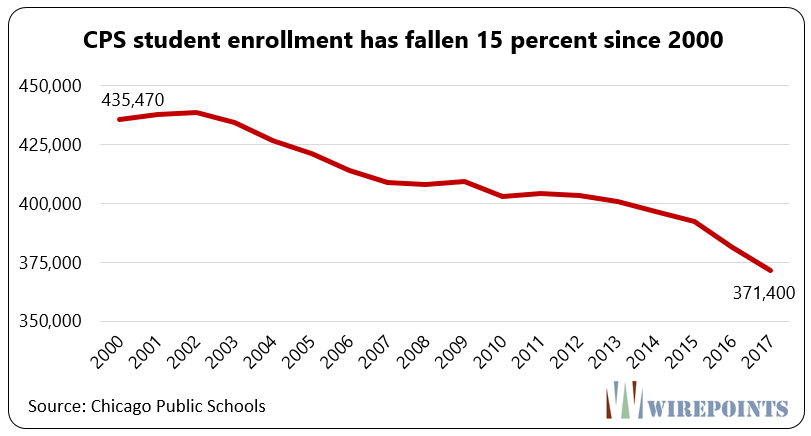 Where is the money going to come from? You guessed it. The new money that was supposed to plug the district’s other holes.

You can’t help but wonder if Moody’s acted too early. Though they upgraded CPS’ credit, they hedged plenty in their announcement: “The district’s debt levels are likely to grow in fiscal 2019 if proposed capital and operating budgets are ultimately approved.”

And that’s precisely the problem. Insolvent CPS is dependent on a state that can’t pay its bills, has a $130 billion-plus pension crisis, can’t balance its budget, and is rated just one notch above junk.

For sure, Rahm will take the “good” news and run with it. After all, it’s election time and the finances have to look better.

That’s certainly motivated him to “fix” the city’s own numbers. By changing just one assumption – the discount rate the city uses to value its pension obligations – Emanuel made more than $7 billion in pension liabilities disappear. That’s got many people cheering, never mind it was all a trick to push those billions out into the future. Wirepoints covered the details of the scheme here.

Chicago’s improving numbers are just another example of Illinois mathematics, trying to fool the people into thinking everything’s fine. Just in time for the elections.