It’s been over a week since the Chicago teachers strike was settled and only now are the right questions being asked about the contract. How is the district going to pay for the $1.5 billion in additional operational costs – a near 20 percent increase in payroll costs by year five? How much will property taxes go up? Why were pension costs never talked about? How can the district afford to give teachers bankable sick leave that lets them retire 1.5 years early with a full pension?

And now with a CPS release that shows enrollment fell by another 6,000 students, add this question: How can Mayor Lightfoot and CPS grant the CTU what the mayor calls the “most generous contract” in the union’s history when the school district continues to shrink?

As the graphic shows, CPS is in a nearly uninterrupted 20-year enrollment freefall. In all, CPS has lost more than 80,000 students, or 18 percent of its total, since 2000. 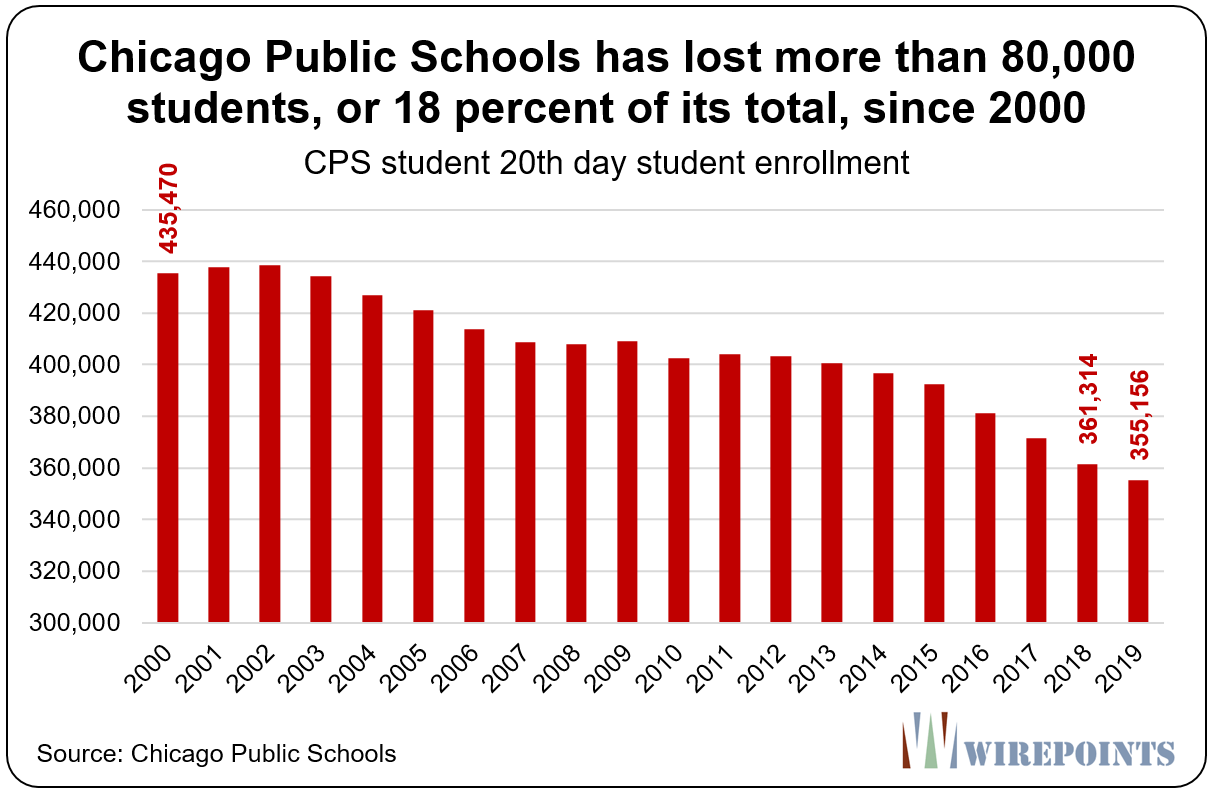 The contract makes even less sense given the district’s additional loss of students and the expectation that more losses are coming. Never mind that Chicagoans are still hurting from the record property tax hikes imposed by former Mayor Rahm Emanuel. Or that Lightfoot will have to raise property taxes to help plug the city’s separate $838 million shortfall – an official number that doesn’t properly reflect the city’s true deficit.

The school district has agreed to a long-term teachers’ contract that locks in salary increases of 24 to 48 percent over five years. It guarantees hundreds of new jobs in writing, despite CPS’ shaky finances, the district’s deep-in-junk rating and the prospect of an eventual economic slowdown. The deal also limits the options of more kids to attend CPS-managed charter schools – giving parents looking for better options no choice but to leave CPS altogether. And CPS won’t close schools that are nearly empty. 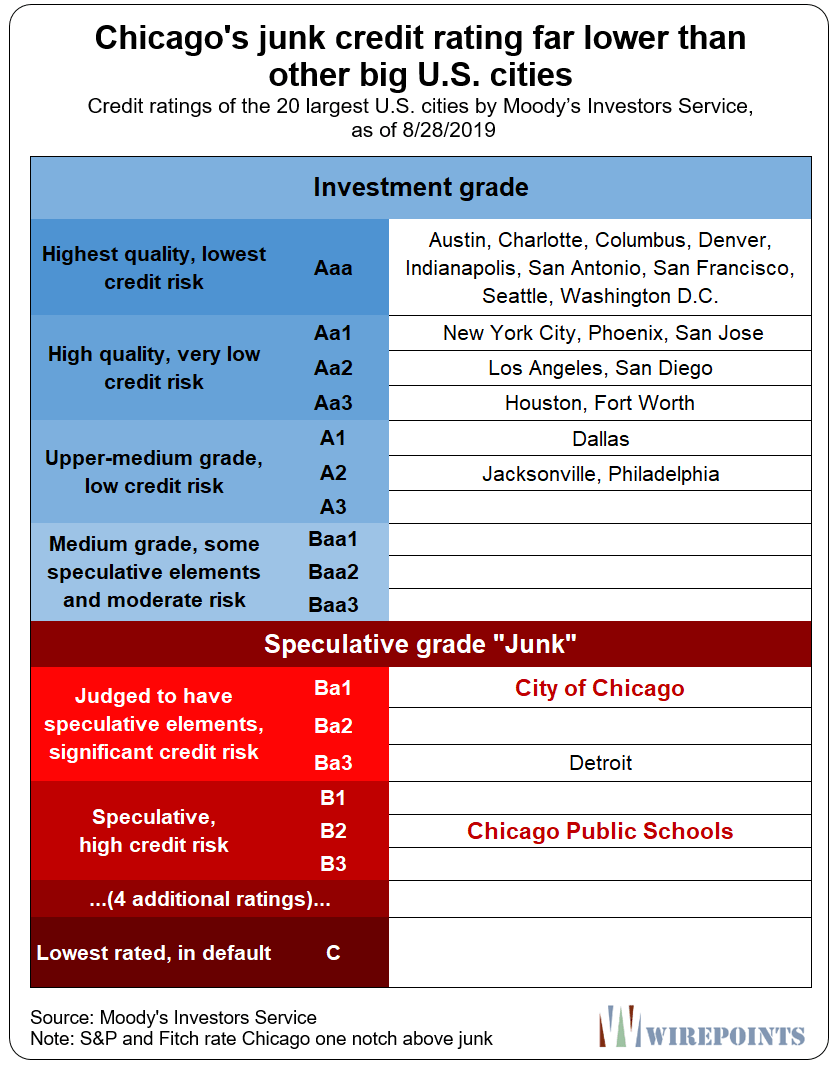 Supporters of the new teachers’ contract may think they’re being empathetic towards CPS workers.

But the mayor and the union’s new deal only accelerates the district’s path toward insolvency. And that’s not good for CPS employees or their pensions, or the kids who’ll be left stranded in a failed system.

Read more details about the strike and the new Chicago teachers contract:

If this rate of decline continues and similar contracts are made the CPS budget should increase by $88.74B with (0) students down the road. What a deal for CTU but not so much for taxpayers!

Taxpayers will pick up the tab, again, when it goes into default and has to be bailed out by the federal government.

Of course, everyone in charge today will be long gone by then.

Per trib editorial–Close and consolidate all the 1/2 enrolled (or less) schools, thats all the city can and will have to do. Ctu didnt win on school closing moritorium, the kids and famillies aint coming back.

This article from the NYT is hilarious. The writer is trying to bash the pro-Trumpers who aren’t willing to invest in the community but I have great admiration for these rural folk who understand that cities and states can’t print money. “If you want to make $25 an hr please go to a city that can afford it–we are not here to pay your excessive salaries …”

Your math is way off. I think you had better go back to school.

tried to post comment a couple times and didn’t seem to go through? But wanted to make the point that cps decline in enrollment in k-12 is being offset in part by cps push into tuition based and non-tuition based pre-k who are counted as cps students. This year cps has an increase of 2,800 pre-k students, without whom would make the 6,000 decrease in k-12 enrollment look even worse. Big political money, CTU, SEIU pushing to get in on the pre-k / daycare business. Meanwhile, non-for-profit and private mom & pop pre-k / daycare operators are being pushed out.… Read more »

Let us know if you have that posting problem again. Should not be happening.

Its time for taxpayers to go on strike!

Illinois has suffered a NET loss of 1.5 million residents to outmigration since 2000 – a whopping 11% of its 2000 population. Second worst only to New York. That means lots of taxpayers have gone on strike – by leaving.

I went on strike in October, 1980. Never regretted it.

Lightfoot got played like a fiddle is the nice way of putting it. She is the CPS’s b&@%# is the not so nice way. Light foot had ammunition like declining enrollments and she didn’t do a thing with it to fight for taxpayers.

Rick, you are right. She had the declining enrollments, Rahm’s record property tax hikes, falling real home values, 4 years straight of dropping population, junk ratings, upcoming negotiations with police and fire, etc…and she didn’t use any of them to defend taxpayers and ordinary Chicagoans.

How long is the “hold harmless” provision that was attached to the Evidence Based Funding legislation stay in effect? I thought it was temporary, maybe 3 years, ending in 2021. CPS has lost over 16,000 students since that passed yet gets the same state funding?

I’d imagine the increased funding every year maybe offsets the hold harmless funding? I have a hard time understanding how the two work together.

Teach 20 years then double dip, is available and super attractive relativeto real-world, like nursing.
NOW: how do we ALL apply for that sweet deal, then how do we ALL get judicial review for being passed over for patonage hires?
And how do we get our nursing later when we need it?

Possible solutions? 1. historical performance of Illinois political industry offers guidance on what works.and what doesn’t work. 2. Good actors who.seek to.survivive exploitation by bad actors in illinois should seek mechanisms known to.succeeed in Illinois, rather than same old mechanisms known to. fail in Illinois . 3. Assume bad actors will continue taxtaking within and without the law using bully tactics successful in the past. 4.TIF historically works to enrich bad actors. 5. TIF may be employed as self defense mechanism against bad actors, and in so doing produce an impediment into the wide-open spigot transferring public funding from (innocent,… Read more »

All I know is the CPS/CTU is lucky I’m not the mayor. “No raises. No new benefits. Take it or leave it.”

I would have fired them all! They work 180 days a year and make great money and benefits already! Strike in the summer when they are off😡

5
Bob Out of Here
Reply to  Stephanie

$75K a year with 3 MONTHS paid vacation? Wish my employer was that generous.

1
James
Reply to  Bob Out of Here

It’s been that way for many, many decades, essentially since the memory of mankind runneth not to the contrary. You could have done it, and you knew at that time in your life you had the choice. So, why didn’t you? Now you seem some combination of envious and/or resentful. It seems a little disingenuous frankly given your free choice of a career path otherwise.

I know, I would have liked to be a teacher but when I was younger I thought teachers were underpaid because they were always going on strike. Although at my grade school one of the strikes only lasted a day because they brought in replacement teachers. Coincidentally the teachers that did cross the picket line were the good ones.

1
So sorry Ill
Reply to  James

Maybe Bob wanted to amount to something in life.

It would have been nice to know in hindsight what the future would have to offer. Many of us would have probably made different choices. The rules for teachers and public employees have had drastic changes made thruout the years like 3% compounding/highest 4 year average to base pensions on/unlimited spiking up to 2010/more taxpayer total or partial pension pickups with every new contract/Cadillac healthcare/etc and these were probably not offered at the beginning of their careers. All these deals were made by using taxpayers as collateral unknowingly.. If 401K’s or IRA’s were offered from Day 1 to public employees… Read more »

As a libertarian, I do not agree with everything in the philosophy, but I ask you to consider this wirepoints article as an example of what few think about (excluding libertarians). Why is CPS asking for ever more staff/funding with ever decreasing students? 1) Government is THE only true monopoly. Unlike the free market that has to have consumers voluntarily hand over money for products/services, government commits extortion by way of taxation. If the manager at Walmart could force you to shop there by way of the threat of throwing you in a cage, would his prices be fair or… Read more »