Yes, it’s true. Teachers in Chicago don’t get Social Security. They don’t pay into the fund and they don’t get the benefits. Illinois politicians opted out of Social Security for teachers decades ago in favor of government-run pension plans.

But what the CTU won’t tell you is that the average retired Chicago teacher gets far more in annual benefits than the average Chicago private sector worker gets under Social Security.

This fact is being ignored as the union strikes for more compensation and thousands more in staffing. Both demands will drive up the district’s pension shortfall – the primary reason CPS is already rated five notches into junk and on a path toward insolvency.

Today’s average CPS retiree gets nearly $56,000 in pension benefits annually. That’s 3.25 times more than the average Social Security benefit in Illinois, which was just $17,200 in 2018. 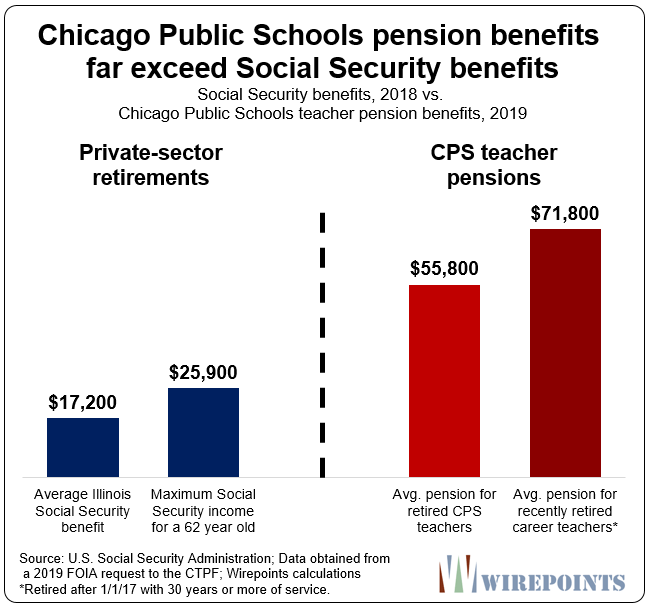 The average CPS pension is also far more than the $29,665 the U.S. Census reported as the average retirement income in Chicago in 2017.

That’s not surprising given the average American in their 60’s has a retirement account balance of just $172,000, according to a study by Transamerica Center for Retirement Studies.

And just looking at average CPS pensions is misleading. A more true measure of just how valuable teacher benefits are is to look at retirees who had a full career at CPS. Those who retired in the last three years get pensions of nearly $72,000 annually.

That’s also far more than the $25,900 maximum Social Security benefit a private sector retiree gets if she retires at age 62.

The benefits for CPS pensioners don’t end there.

Teachers also get cost-of-living adjustments (COLAs) that compound automatically at 3 percent each year. Social Security benefits, on the other hand, only grow based on inflation, which has averaged just 1.55 percent a year over the past decade (2008-2018).

For the average retired teacher, that means her pension of nearly $56,000 will double to more than $113,000 after 24 years in retirement.

And newly retired career teachers will see their $70,000 pensions grow to nearly $145,000. In total, a career CPS teacher can expect to collect, on average, over $2.2 million in retirement benefits. 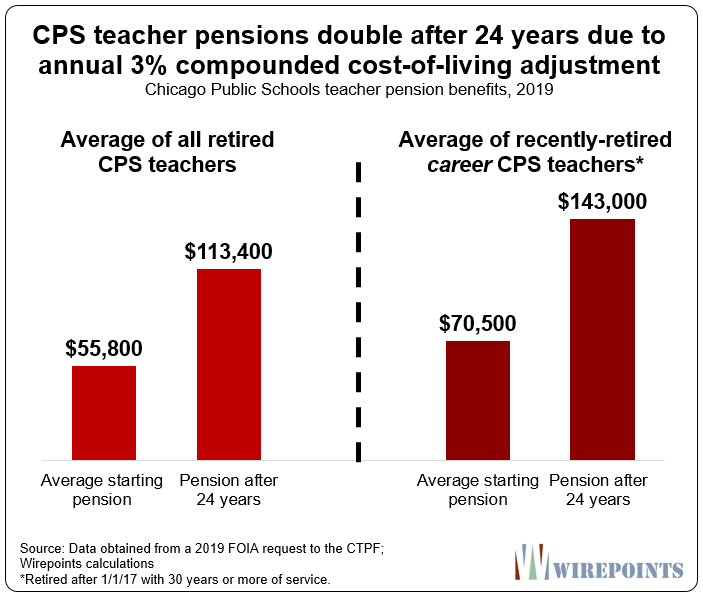 Mayor Lori Lightfoot has already asked Gov. J.B. Pritzker for a state bailout of the city’s nearly-bankrupt pension funds. Now, just a few months later, she’s making the city’s problem bigger by giving away what she has termed the “most lucrative package in [CTU] history.” Average teacher salary increases of 24 percent and hundreds more in staffing will only drive up CPS’ pension debts, which Moody’s calculates at $25 billion.

Both sides of the negotiating table can continue to ignore pensions, but bigger salaries, more staffing and the compounded colas will ensure the pension bubble will get bigger.

It’s only a matter of time until it pops.

Read more about the teacher’s strike and Chicago’s financial crisis:

No, No, No, No, because those who tax and spend are the elite and people like “us” are the preyed upon.

I am a tenured teacher and have been employed 13 years years at CPS – My benefit statement indicates that If I retire in 4 years I will receive 23,000/year pension benefit. The teachers receiving 55,000 are those who have worked tirelessly for 30 + years.

Social Security is not meant to be a retirees only source of income. That’s why Iras came about for people without pensions.

Katt your post just shows the entitlement mentality that many teachers have. As indicated that’s about what someone would receive as a social security benefit. The big difference is they won’t receive it until they’re 62. So they’ll essentially have to work tirelessly for 30 + years to receive less than half of what a teacher receives. The math just doesn’t work when you want to collect a pension for twice as many years as you’ve worked/contributed. That’s one of the reasons that some of these pension plans will implode. Hopefully you’re not nearing retirement age and can start contributing… Read more »

Collect a pension for twice as many years as you have worked? How many people actually live long enough to do that? A person who worked for 30 yrs would have to collect pension for 60 years. Retire at 60. Live till 120? Retire at 55. Live till115?

What percentage of your students read at their grade level? if it’s less than the state average, you should get $0.

Tirelessly for 8 or 9 months per year. I understand it’s a challenging job with a high percentage of “disadvantaged” students. I understand that new teachers may work an hour or two each night to prepare for the following day and work weekends to prepare lesson plans. Teaching is, after all, a “profession.” I think many teachers have a union mentality which translates to $X per hour so they resent having to put in time after the classroom hours. (I could be wrong but the current strike certainly me the impression of a government employee mentality. I worked in government… Read more »

Ghost- The Motley Fool has info. Search social security for teachers. What gets me is that when teachers opted out of SS in the 50’s the state had to offer an equivalent program to SS (but nowhere does it say more than but can not be less than) according to IRS and Federal rules I think under the “safe harbor provision” So when they opted out of SS they opted in to a local plan without any consent of taxpayers. I can not find any ballot or referendum from the 50’s where taxpayers authorized (voted) to allow this. To me… Read more »

Looking at the pensions of retired teachers is highly misleading. In Finance we call this survivorship bias: the retired ones are the survivors, the ones that stayed in the job long enough to actually receive a pension. For every one of these folks, I bet there are at least two who did not stay the required 10 years to get vested, or who stayed 10-20 years but left while still relatively young to pursue other opportunities, either as teachers outside of Illinois or who left the profession entirely, and cashed out rather than waited 20+ years to receive modest benefits… Read more »

Andrew has a point. Those that leave their pensionable public sector professions and finish their careers in either the private sector or another state get screwed on their pensions. Once you leave, your pension remains frozen in time. I would think this would mostly impact higher ed as professors move from one university to the next trying to reach tenure.

Word of pension advice: Start in private, then go public.

Nixit, that’s bad advice advice in states such as IL where you you don’t pay into Social Security as part of your public employment. In those cases the more you years you were in private employment the lower will be your public employment pension because of a truncated career their unless you work long enough to maximize it otherwise by working long enough and well past those there who had no such other private employment earlier. Secondly, upon your eventual retirement your Social Security pension will be seriously reduced because the Social Security WEP (Windfall Elimination Provision) rules require it… Read more »

Especially unfair for Tier 2 that has 10-year vesting. Something like 70% end up with nothing. Andrew is our favorite liberal here because he argues with facts not ad hominems.

The strikes about 1.)increased pay ( which Lightfoot already gave away the store) and 2.)increased membership cloaked in a lot of social responsibility bs–plain and simple. With declining city population & cps enrollment and Janus CTU is loosing membership. The push to fill supposed staffing shortages is in reality a push for gaurenteed increased CTU membership. All those newbie young Tier 2 teachers out on the picket line are just getting used by older Tier 1 and retired CTU because statistically they wont stick it out for 10 years to get vested. this trib column makes some good points https://www.chicagotribune.com/opinion/commentary/ct-opinion-chicago-teacher-pensions-vesting-strike-20191023-20191022-pvsekkyczjctpdnkmb3rvhe5ki-story.html

If your a tier 1 cps teacher who’s done there 10 years and is vested why do you need ctu and there exorbitant members dues, you go the janus route and save big bucks$$. How many older teachers in there 40s do you see in all those news photos….the newbies are getten played..while us tax payers are getten screwed

Normally an employee contribution to a defined benefit plan is made out of after-tax income with the result that a portion of the eventual pension is not taxed. The untaxed portion is the ratio between employee contributions and employer contribution. In a pick-up plan, the school district pays all or a part of the employee’s contribution. The district contribution is not taxed to the employee but the eventual pension payment attributable to the pick up is taxed as ordinary income. Are you following me? The theory is that the picked-up portion is in lieu of current taxable compensation or future… Read more »

Not sure I’m following you. Pension contributions are pre-tax, meaning you deduct them before determining your tax liability. So when the school district pays your employee contribution for you, are you allowed to deduct that from your taxable income as-if you made the contribution yourself?

No, because the employer made the payment.

Since most CPS teachers only contribute 2% towards their pensions and don’t pay social security, their actual take home pay is quite good. For example, take a private sector worker who contributes 9% into a 401k and pays social security. For his take home pay to equal that of a CPS teacher, his gross pay would have to be 20% greater. So a CPS teacher grossing $80,000 nets just as much as a software developer grossing $95,000.

Taxing capacity. Not all incomes are created equal.

Cass didn’t cover that, buts that strictly a Chicago insanity problem not seen elsewhere in the US that I’m aware of. I guess since the teachers didn’t pay the pension their salary was higher and they did pay taxes on that.
Being that Chicago used that as a method to give a raise with money they didn’t have, promised to put it in the pension, and never did (as planned).
Kick the can… Should be the motto for the City of Chicago.

Next, the amount which IS deducted from teacher salary is tiny by all other workers standards:

In CPS only 2% of teachers salary is deducted for their portion of retirement contributions.
In collar counties only zero-1% of teacher salaries are deducted.

Wait? They only contribute 2% of their pay to their pension fund? This is worth a separate article. Are all of the other school personnel (superintendents, nurses, etc) covered by the same pension fund?

Saying someone doesn’t “get” social security is like saying the ACA made healthcare affordable.