Continued from Part 4: State is a national outlier when it comes to losing wealthy residents

Illinois politicians, from Gov. J.B. Pritzker to Mayor Lori Lightfoot, are counting on residents to stick around and pay the higher taxes both have planned. Pritzker is pushing a progressive income tax hike that will hit the wealthiest Illinoisans with a 60 percent tax increase, while Lightfoot is threatening every Chicagoan with a massive property tax hike if she can’t get a bevy of other tax increases passed.

Expect those lawmakers’ hopes to be dashed. According to migration data from the IRS, people of every sort are already leaving Illinois. Old and young, rich and poor, it doesn’t matter. Illinois has been a net loser of people to out-migration in every age and income group.

The detailed breakdown below shows just how pervasive Illinois’ loss of people is.

The 2012-2016 IRS data – 2016 is the latest year available – allows us to look at the in-migration and out-migration of Illinois tax filers. In every year and in every category, Illinois suffered net losses of tax filers vs. the rest of the country.

The IRS data groups the age of tax filers into six categories, ranging from “below age 26” to “ages 65 and over.” 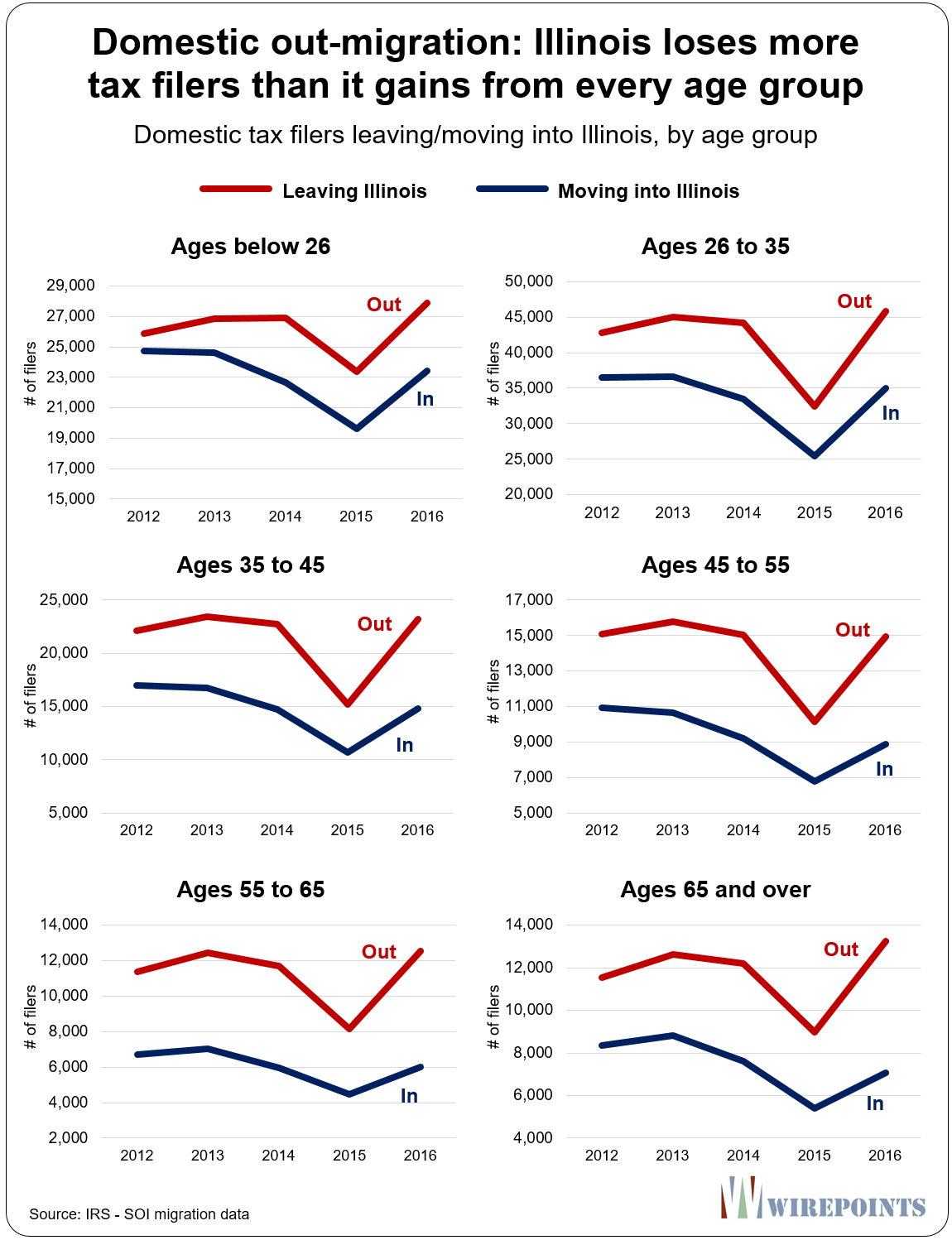 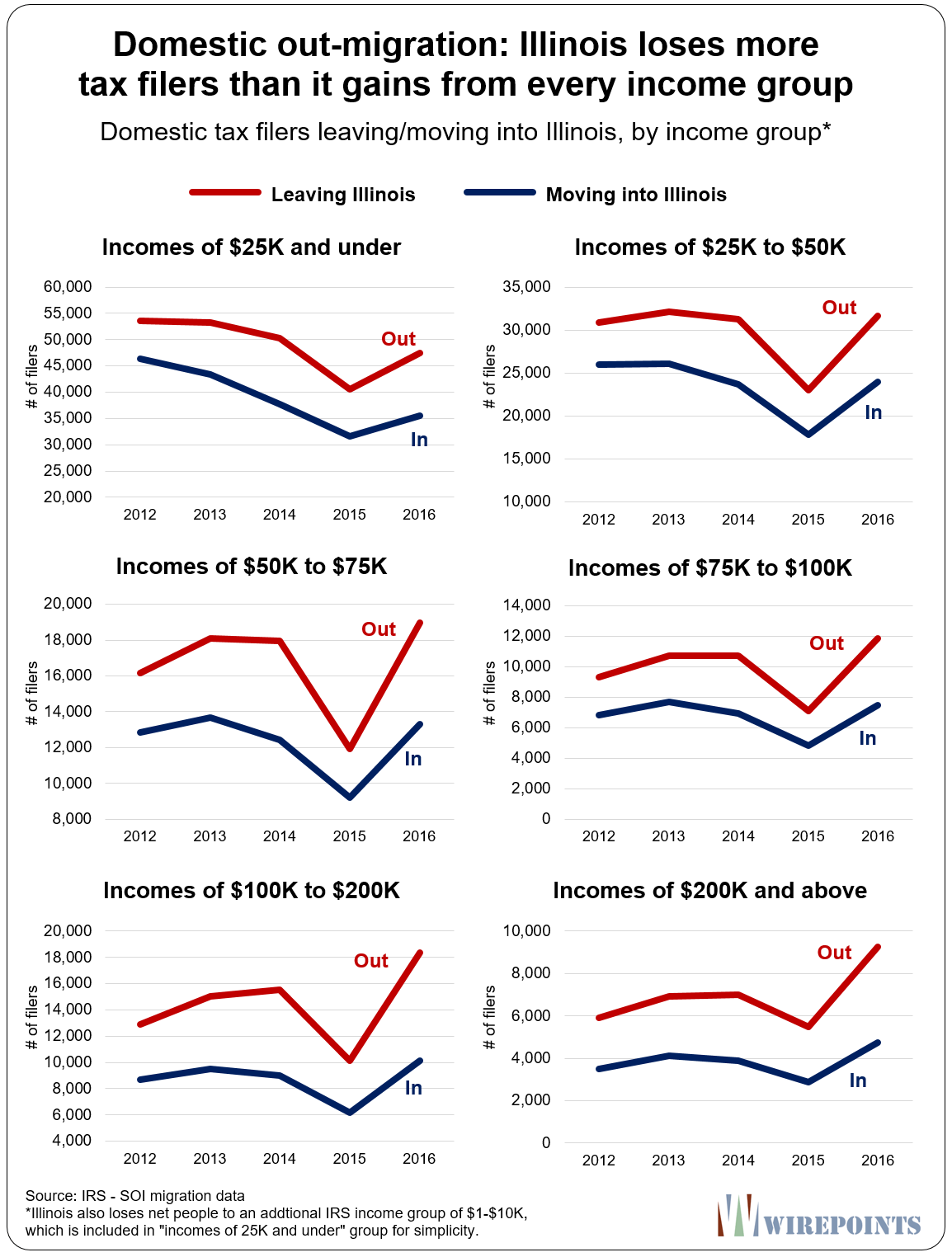 In all, the state lost more than $18.5 billion in net AGI due to so many people leaving over those five years.

As we said at the start of this series, there’s no indicator quite as damning of a state’s failure to govern than the flight of its residents to other states.

In Illinois’ case, the state is doubly damned, as the numbers show there’s not a single group of people by age or income that the state attracts more than it repels.

All these numbers are indicative of the downward spiral Illinois is in. So far, the only “solutions” Springfield and City Hall seem to have are tax hikes. Expect that to make the above out-migration numbers worse.

Just wait when the 2020 census comes out. Illinois is losing 1 congressional seat, (Guaranteed) but dont be at all surprised when Illinois loses 2 seats.

Then, and only then, will those dumbasses in Springfield get the picture.

They don’t care because it’s just another opportunity to draw out another Republican district. That’s what happened to Joe Walsh – IL lost a seat after the 2010 census so Springfield gerrymandered Walsh out of a district; and then gerrymandered the western suburbs of Chicago to give Duckworth a house seat all the while making it more difficult for the remaining republicans to win. IL still sent the same number of Democrats to Washington. Just one less (R). The strategy worked because within 3 election cycles, the entire Chicagoland area went blue. Crazy stuff happened – geographic areas that are… Read more »

The figure I would like to see is how many move into Illinois that do not file tax returns. Illinois is, based upon what many politicians have said, is a “Sanctuary State” offering shelter to immigrants who I assume are jobless. This too is a large part of the problem and I guess I have looked in the wrong places but if anyone knows just how the Free State Army’s population has grown or declined I would appreciate hearing the numbers.

We will be on that with our own article. What lunatic ideas.

4
Governor of Alderaan
Reply to  Douglas

Aren’t these the same people who squealed like pigs when President Trump forced them to pay their fair share of taxes by eliminating the SALT deduction, or when Sandoval proposed a $1000 annual tax on electric cars?

I suppose he’s a “public figure” but beware a letter from his lawyer asking you to prove that he has been treated for lunacy or idiocy. College professors do that sort of thing these days. https://www.insidehighered.com/news/2014/05/23/professor-sues-student-over-his-online-reviews-her-course

I enjoy nothing more than watching that dumpster fire of a liberal hellhole burn from a great distance. The heck with Illinois and its idiotic residents that keep voting in these crooked liberal cronies that are stealing your hard earned dollars! Its hard enough to fund your own retirement, let alone a bunch of government employees on top of that!

There are actually only 5 districts in Illinois that vote Democrat but their combined population is more than the rest of the entire state. My husband and I are moving out of state as soon as our house sells. We have run out of excuses to stay… it will never get better.

And the in-migrants all seem to be super woke politically hyperactive socialist Democrats. Which explains why there are so many democrat votes every election. It’s a socialist utopia. Flee while you can. These colonists don’t share the same values as you do.