A Gov. J.B. Pritzker task force has recommended that the state’s 650 local public safety pension funds consolidate their assets into two funds solely for investment purposes. It’s a good idea that should help improve the health of the funds. The larger, consolidated funds are expected to earn higher returns on their investments and spend less on fees. Consolidation should have happened years ago. The task force’s full report is linked here.

But if lawmakers pass the proposal, will it be “a momentous achievement in state history,” as Gov. J.B. Pritzker said upon the release of the report?

The public safety pension funds make up just 4.5 percent of Illinois’ combined $270 billion in official pension and retiree health insurance shortfalls. The proposal doesn’t reform how Illinois hands out retirement benefits. And it doesn’t change the fact that cities are hamstrung by state control of the pension rules. So while the savings could be meaningful for the public safety funds, it won’t end Illinois’ pension crisis or its worsening trajectory.

The task force proposal calls for the assets of the 650 downstate funds to be consolidated for investment purposes only. Specifically, two new pension boards, one for local police pensions and one for firefighter pensions, will take control of how pension assets are invested. But local pension fund boards would still exist and still manage their own liabilities independently. They’d also still control back-office functions, actuarial assumptions and “maintain all other authority such as pension awards and disability determinations,” according to the Illinois Municipal League. Chicago’s police and firefighter pensions are not part of the proposal.

How much more will consolidating the roughly $15 billion in assets help the funds earn? Pritzker and his task force claim consolidation can help earn up to 3 percentage points more in yearly returns compared to what the funds have been earning recently (see note below for details). That’s $500 million more in income each year. The windfall is significant – the equivalent to half of the nearly $1 billion local taxpayers pay to the public safety funds today.

Those returns are supposed to be possible because small local pensions are currently forced by law and their circumstances to invest heavily in low-yield, fixed income instruments. Consolidation would allow for longer-term investing in stocks and other securities with better returns. Fees and other administrative expenses will also drop.

However, the report’s investment estimates are overly optimistic. A look at the 10-year returns of various Illinois funds in the report show the gains might be $160 million to $300 million a year. That’s still very significant – 15 to 30 percent of what taxpayers put in today – but not nearly as high. That amount would make some difference on the $11 billion pension shortfall over time if those investment gains could truly be realized – and, everything else remained equal.

But not everything else is equal. Previous history shows that without changes to pension and collective bargaining laws, those investment windfalls could be swallowed up quickly by the unions. Higher returns would relieve some of the budgetary pressure on cities, meaning more cash in their coffers. And that could spark demands for higher pay and more benefits from the local unions.

And there are other concerns, too.

First, the 650 separate police and firefighter pension funds – and their thousands of trustees – would continue to exist. Illinois would continue to have the second-most pension plans in the nation. That would only perpetuate the administrative bloat, waste and corruption that many of these plans have been known for.

Second, the energy spent on consolidation would deflate pressure for real pension reform at all levels. You could expect lawmakers to sell this to the public as a real fix – as if they really tackled the overall pension problem. And the public safety unions for sure will be loathe to accept any other reforms after this is done.

Third, consolidation comes with the risk of lawmakers going further by eventually authorizing a state takeover of downstate pensions – full, substantive consolidation – which would be highly objectionable for many reasons. The socializing all downstate pension debts at the state level would amount to a bailout of hundreds of municipalities. We’ll be writing about that risk separately.

The proposal to consolidate pension fund assets is sound and should be pursued. But don’t think for a second that it solves much of anything. And watch out for the risk of it morphing into a state takeover of local liabilities. That’s when this good idea turns bad.

Note: The task force reached that $500 million amount by comparing the public safety fund returns to the Illinois Municipal Retirement Fund (IMRF) returns over the recent 5-year period. However, it’s not a proper comparison. The IMRF is 91 percent funded. In contrast, the public safety systems are only 55 percent funded in total. That includes 99 individual funds that are each less than 40 percent funded. That means the new consolidated funds won’t be able to take on as much risk as IMRF can, as they’ll need to keep more liquidity for payouts to current retirees. 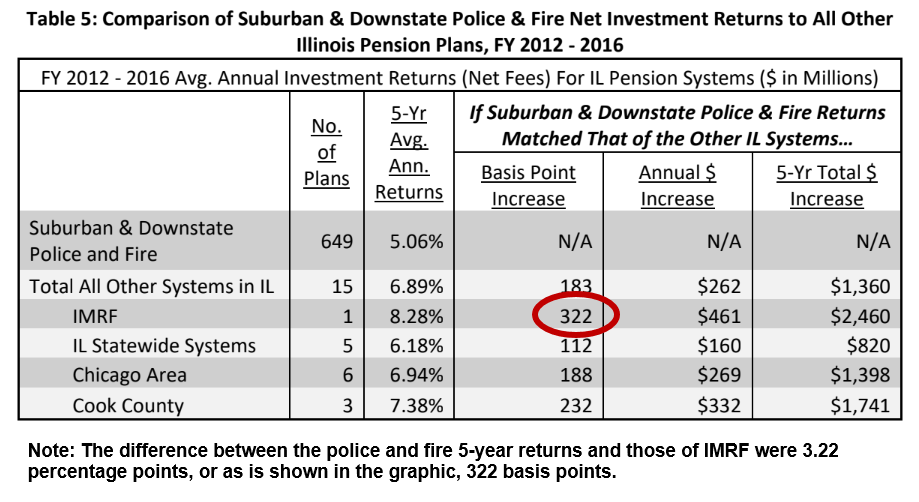 To read more about Illinois downstate pension crisis and the solutions

The report bears all the hallmarks of consultant-speak and hiring (i.e. paying) high-priced consultants is what governments do when they face intractable problems. As Detroit was in its final perpendicular dive, it spent a lot on consultant experts to suggest “solutions.” It was particularly important that those consultants fly in from New York or Boston and charge high hourly rates … perhaps discounted a bit for their public-spiritedness in addressing problems they knew nothing about. It’s likely the legislators will line up and pass this as evidence of their sincere desire to address the problem. In doing so,our representatives will… Read more »

Ted, John, Cass—the JB consolidation report states that Illinois has 2nd most pension plans and wonder what state has more pension plans-must be California?, but then remember reading Jane the Actuary piece where she claimed the +650 municipal cop and fire pensions account for an astounding 43% of all municipal pension plans in nation!!. In any case if the state can wrap all these +650 pensions under one umbrella state over site, than I agree with Cass, with consolidation its make it easier to push for federal bailout nation wide. I know Ted and Mark think federal bailout extremely unlikely,… Read more »

Leave it to an Illinois politician “task force” to not only not solve the problem, but come up with more ways to exacerbate it. I read the article yesterday about the risk that the Tier II pensions are not federally compliant, and could cost more (100’s of millions more) in costs. They want to bring it into compliance by giving more benefits, as a solution. This seemed to be their biggest concern.

This isn’t whistling past the graveyard…it’s having a picnic, band and potato sack races there. Maybe there’ll be a water balloon fight with much laughter and fun.

Yeah, the Tier 2 comments aren’t nearly getting enough press. They’re basically saying Tier 2 benefits will have to increase. That means EVERY SINGLE ASSUMPTION made about Tier 2 savings or pension re-amortization is erroneous.

Keep in mind that they have no choice except to meet the federal compliance minimums, which meant fixing at least one benefit — the cola on the pensionable salary cap. However, they did go further. Rich Miller has a good article up (did I just say that?) on the other changes and the likely reason they were made. https://chicago.suntimes.com/columnists/2019/10/11/20910511/illinois-pension-consolidation-firefighters-police-rich-miller

We will do our own article on this soon. It appears to me that Tier 2 will still be a raw deal, primarily because the vesting times are too long, screwing the majority of Tier 2s out of any payout.

From Miller’s article: “Even so, the governor’s bipartisan task force should be commended for recognizing that: 1) Pension benefit recipients are real people, not just some numbers on a piece of paper; and 2) Reforms don’t automatically happen just because yet another blue ribbon commission recommends them — the reforms must be crafted in a way so they have a chance to clear two legislative chambers and be signed into law.” In typical Miller fashion, he is “commending” findings that “recommend” 1) increased benefits for one tier and 2) decreased bureaucracy thru consolidation. What exactly is there that the unions… Read more »

Article again: “The pension fund consolidation task force also recommended changing the pension calculation from the current average of the highest eight of the last 10 years of service to the average of four of the last five years because first responders’ “years of service tend to be more abbreviated than other public-sector occupations,” the report claims.” For the love of God, do NOT touch this. Maybe reduce the vesting period for minimum benefits, but anyone 10 years or over should be subject to the “highest 8” calculation. This forces those would-be pension spikers to start those extra-cirriculurs (ie coach… Read more »

If you notice another task force will of be formed. How many more task forces will be formed? Are the task force members unionized if so their conclusion will be THEY deserve a pension also. Soon everyone but the taxpayer will be on a task force! The property tax task force comprises of 88 members. Coincidentally that’s the same amount of keys on a piano. I’ll wager it will play out of tune!

October 22, 2020
Illinois' wealthy don’t need defending. They know how to take care of themselves just fine. But don’t assume that a tax hike on them will be a free lunch for the rest of us. If too many wealthy leave, our reform-shunning legislature will only have one place to make up for the loss in tax revenues: Illinois' middle-income earners.
View Comments (5) | Add Comment