She doesn’t have a backup plan should many of her 2020 budget assumptions go wrong. And with spiking city pension costs and a new school contract that increases spending by $1.5 billion over five years, Lightfoot could break the property tax hike record set by Rahm Emanuel in his second term.

That should scare Chicago homeowners. Chicagoans have already missed out on 20 years of growth in their retirement nest eggs as a result of the city’s collapsing finances. Windy City home prices – when adjusted for inflation – haven’t grown since 2000.

Chicago sits at the bottom of the 20-city Case-Shiller Index – a leading measure of U.S. home prices – with only Cleveland and Detroit home values performing worse since 2000. Chicago homes are up just 45 percent over the entire period, slightly less than inflation (up 51 percent).

In contrast, residents in almost every other major city have seen their homes grow far more in value. Los Angeles, San Francisco, San Diego and Seattle lead the country and all have grown 160 percent or more. 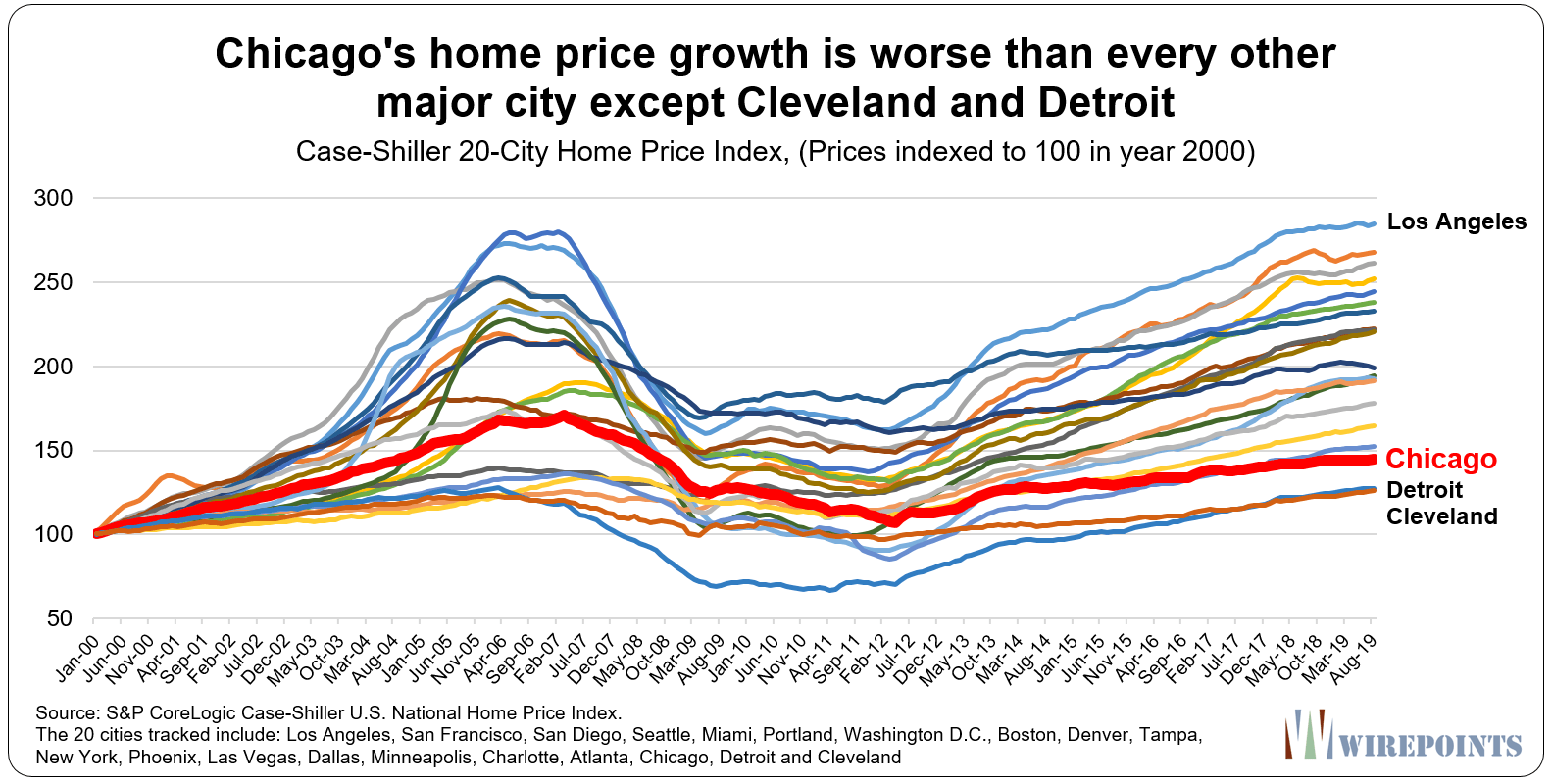 And it looks like Chicago home prices might soon begin to drop. As S&P reported recently, seasonally adjusted Chicago home prices in September grew just 0.8 percent when compared to the same month last year. That’s the lowest growth the city has seen in seven years. 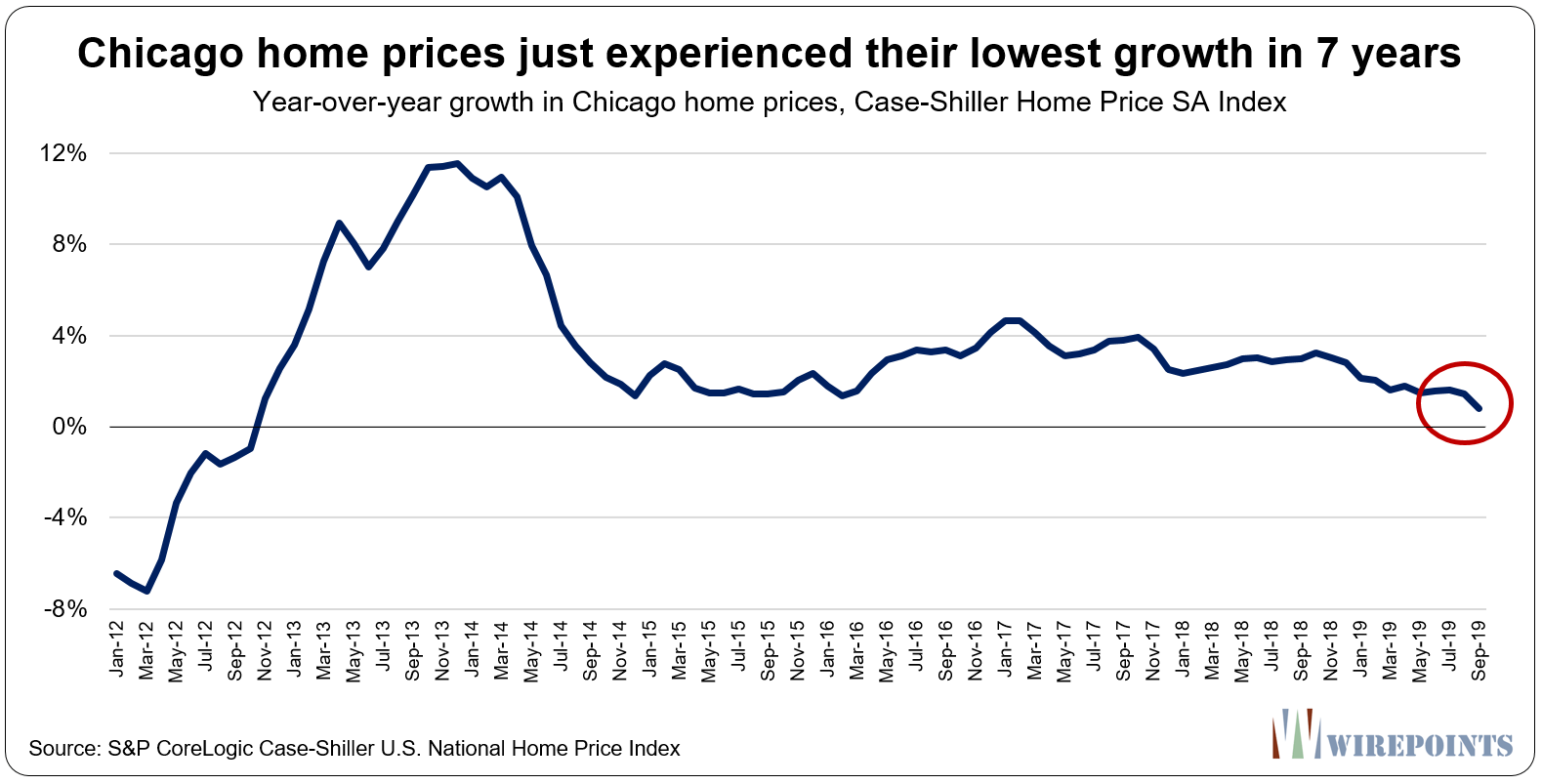 Falling values at the top of the current bull market should signal to politicians that property tax hikes – and in fact, any tax hike – are the last thing Chicago homeowners need. 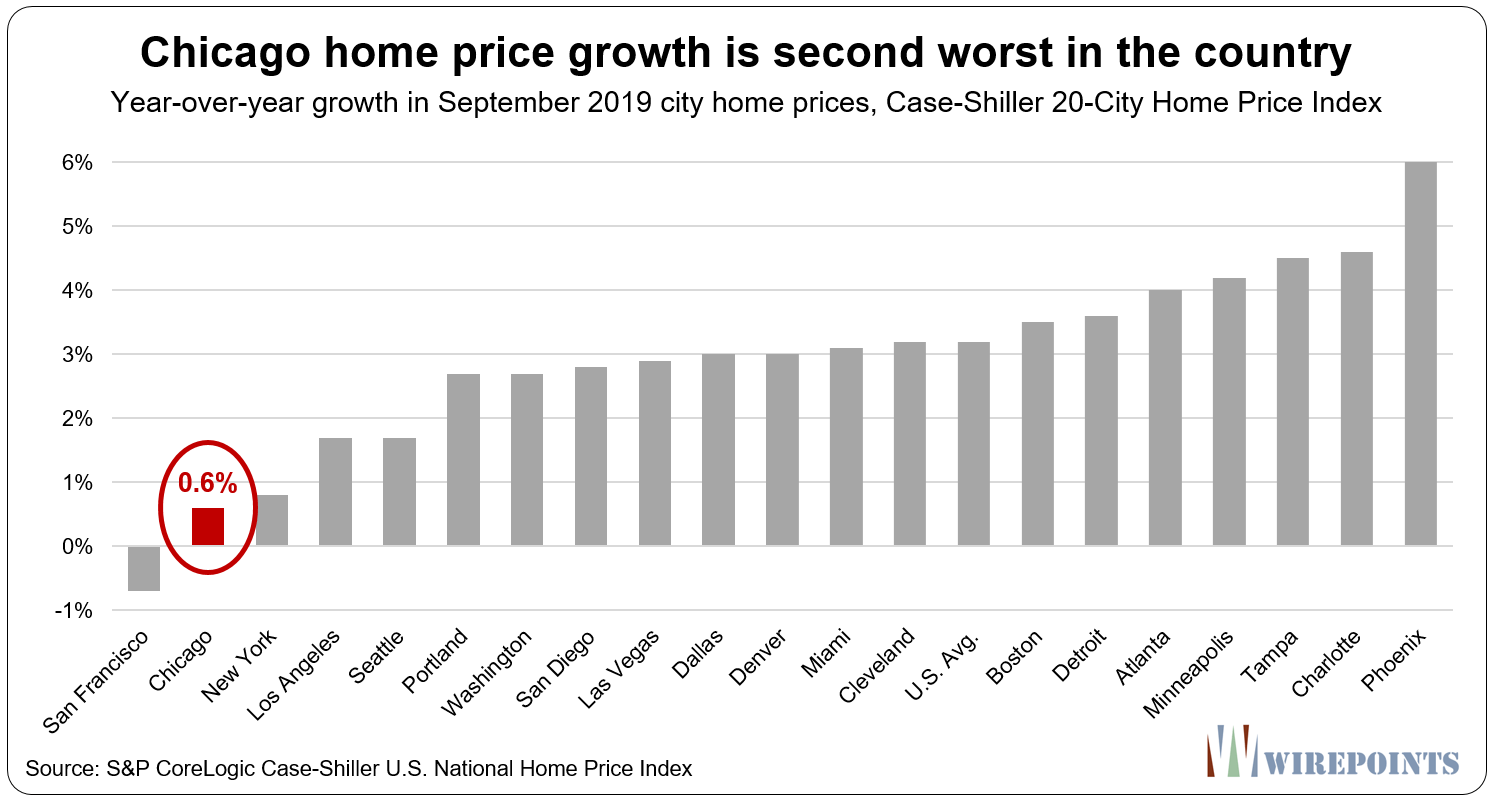 That small year-on-year increase in September is the second worst performance in the country, second only to San Francisco. What this shows is how poorly Chicago homes have been doing in both the short and long term.

More taxes on the way

Unfortunately, more property tax hikes are likely on the way thanks to the structural holes in the mayor’s budget, the city’s ever-growing pension costs, and the new CPS teachers contract.

Lightfoot’s budget was precariously “balanced” to begin with, but the legislative setbacks she suffered, as well as her lack of details on savings, have thrown much of the 2020 budget into doubt.

Far from being balanced, the city’s budget is full of structural holes:

On top of those holes, higher pension payments alone will cost the city $600 million more in 2023 than what it will spend in 2020.

And even more pressure is coming. The city’s police and fire unions are likely to make big demands in their upcoming contract negotiations, particularly since Lightfoot granted the CTU what she says is the “most generous contract” in the union’s history.

The above also doesn’t include the property tax increases needed to pay for Chicago Public Schools’ new contract. CPS’ expenses will be at least $500 million more annually by the time the new contract is fully implemented in five years.

In the end, Lightfoot could end up hitting Chicagoans with an additional $1 billion in property taxes just for the city itself. And CPS will cost Chicagoans even more.

Additional taxes will be another blow to Chicagoans already suffering from Emanuel’s tax increases, unbearable debts and home prices that have yet to recover from the Great Recession.

e best day of your life is the day you move out of Illinois. A U-Haul will solve the problem. Call a mover today and start a better life for you and your family. Illinois is DOA, no hope. Even the cops, firemen and teachers with the HUGE PENSIONS are running out of Illinois.
Last man standing will be a dead man. 83 Degrees and Sunny in South Florida, NO state income taxes. Freeze you a$$ off in poverty or start a great new life.

Property taxes = rent on your own property. Would it be proper for government to charge annual rent on your body? Everyone was ok with it when it was a little, but like most things with government, an inch was given and we’re at a mile.

Bungalow property taxes in Chicago are still remarkably low, there is a lot of room to get those taxes up to the same levels of the south suburbs!

And this is the GOOD news

And this is the GOOD news

If you are worth less than $10MM and can execute your occupation out of Chicago, you have no choice but to leave. If I am a consultant, all I need is a great airport. Dallas looks pretty good. Yes, a lot of the middle class left Chicago. A lot remains though in a city of close to 3MM people.

Jeff – I read you blog and found it fascinating. I consistently ask progressives whether increases in taxes are exogenous to productivity. Most don’t understand the question, or they do, they refuse to discuss. Those with net worth over 25M? Probably can insulate themselves from the taxes, corruption and crime, 10M to 25M? Dicier as to whether they should leave. Under 10M? They should leave. The problem for the big government types is that there are lot more of under 10M types than the other two groups. As my tax mentor taught me, that is where the money is, and… Read more »

The vast majority of tax payers are under 10MM, probably 99% are under 10MM. I’m certainly not 10MM or anywhere near it as a Gen X’er who’s fortunate but certainly not lucky (and not involved in finance either). It’s a reflection of the massive wealth disparity in america today; and that wealth disparity is concentrated in blue states. Hillary said that she won all of the counties in the US that have 2/3rds of the country’s GDP but she fails to mention that almost all of that GDP is concentrated in less than 10% of the population in those counties.… Read more »

Actually, no, the middle class is almost gone in Chicago. It’s confined to the far northwest and far southwest sides: https://www.wbez.org/shows/wbez-news/the-middle-class-is-shrinking-everywhere-in-chicago-its-almost-gone/e63cb407-5d1e-41b1-9124-a717d4fb1b0b Chicago is basically about a million rich consultants and professionals living along the lake and the northwest side. The rest, about 1.5 million lower working class living on the south and west sides, with a few hundred thousand stragglers called the ‘middle’ class holding out in places like Edison Park, Oriole Park on the north side and Beverly and Mt. Greenwood on the south side. The middle class moved to the suburbs long ago, and even there, it’s shrinking.… Read more »

The longer the death spiral continues, the harder it is to break. Borrowing becomes increaingly difficult and accelerates the speed of the death cycle.

I estimate my financial loss was $100,000 by being too lazy to move out of Illinois earlier than I did. What’s your number?

After 20 years here we have easily lost $500k just in home appreciation had we stayed on the east coast. This state is a disaster. For all the tax dollars we pay we can’t send our children to a public school, crime is occurring on every street, criminals don’t get prosecuted. The only possible thing to do here is to LEAVE.