Unexpectedly tucked away in Illinois’ $40 billion 2020 budget was another giveaway to the state’s teachers unions. School districts are once again more free to spike end-of-career teacher salaries and pass-on the resulting pension costs to state taxpayers.

The Illinois Education Association had been pressuring legislators to change the law “capping” end-of-career benefits for over a year, saying spiking was vital to preserving education. Wirepoints thoroughly debunked the claims of the IEA and their Republican sponsors.

First, a bit of history.

In 2005, legislators attempted to partially rein in one of the most despised practices in Illinois: pension spiking.

Prior to the law, school districts across the state were doling out excessive end-of-career salary spikes to keep their unions happy. Districts got away with those spikes because the state, and not school districts, was responsible for paying the full cost of teacher pensions.

It wasn’t unusual to see end-of-career salary spikes of 20 percent for administrators and teachers. Those salary increases, in turn, pushed up the total pension bill across the state.

That’s why in 2005 the legislature finally stepped in and required districts to pay some of the costs of spiking. A school district could still grant high salary increases to teachers near retirement, but the school district, and not the state, would have to pay for any additional pension costs that stemmed from annual salary increases over 6 percent.

In 2018, the legislature brought even more accountability to end-of-career salary spikes. The maximum salary spiking threshold was lowered to 3 percent.

Which is why the unions pressured Illinois politicians to go back to the higher 6 percent threshold. Lawmakers obliged last week when they snuck in language restoring the 6 percent threshold into the 1,091 page 2020 budget implementation bill.

To see how spiking works in practice, just take a look at the automatic salary increases New Trier’s retiring high school teachers get. The below comes directly from the district’s 2016-2019 teachers contract and reflects what career teachers who commit to retiring before 2020* receive: 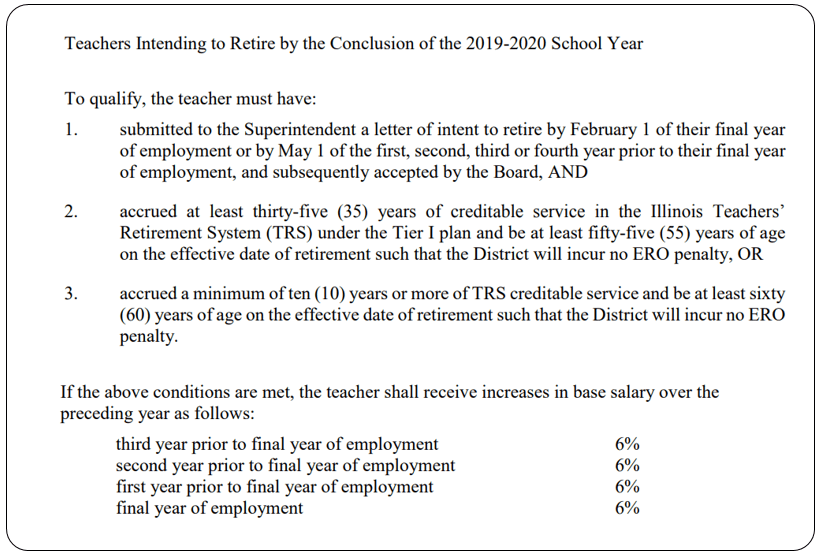 In all, New Trier retiring teachers will get a total, automatic bump of more than 25 percent to their salary in their final four years. And that means far more in pension benefits. How much more? 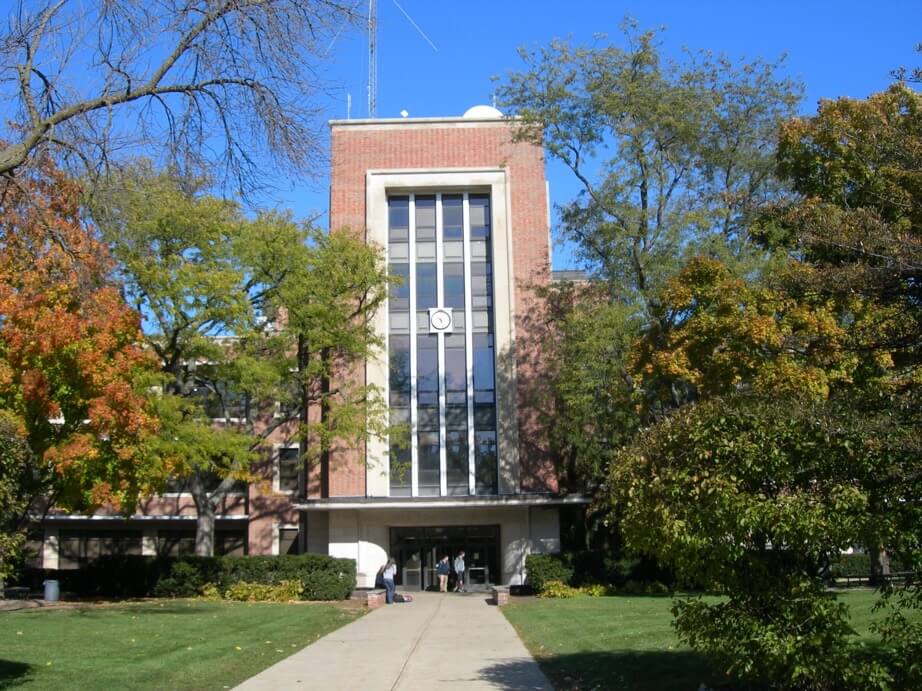 Take a New Trier teacher with a salary of $130,000 who recently committed to retiring in four years.**  The 6 percent bumps will grow her salary to more than $164,000 at retirement. As a result, she’ll earn approximately $400,000 more in pension benefits over the course of her retirement when compared to a salary based on 2 percent annual raises.

Why use wealthy New Trier as an example when districts across the state do the same sort of spiking? Because it and other wealthy districts are the prime beneficiaries of Illinois’ inherently unfair pension funding scheme where the state, and not local school districts, bear the cost of pensions.

This latest change will only make that unfairness worse.

Read more about spiking and the unfairness of Illinois’ teacher pension funding system:

The failure of Measure EE is a glimmer of hope. EE was a scam to fund pensions for teachers in LAUSD but this time taxpayers weren’t conned. Online attacks against EE as well as the fact that many voters knew it was for pensions helped to kill EE. Maybe voters will never wise up in Illinois but the party is over for teachers unions in Calif.

Meanwhile, here in Oblong (population 1600), the HS still doesn’t have an operating kitchen. Lunches are brought over from the grade school, and are often cold by the time they arrive. Been that way for several years now.

My 9 year old stepson also believes we lost WWII. But none of that matters as long as CPS teachers get what they want, right?

Just another financial reward for supporting democrats. Now they can return to teaching 1st graders about fake climate change, transgender special rights, and of course, the awful common core. Notice there is nothing about about the three R’s which have served the western world so well for thousands of generations.

Does it really matter at this point how much the politicians promise the unions? The money doesn’t exist nor will it. Double their pensions, triple it, … who cares? In a few years we can sit back and laugh as the unions and bond holders fight for the scraps in court. Hopefully by then, you will be watching from a safe distance away …. like Florida !!!

It’s for the kids.

Ted–Any quick projections on how many tens of $billions$ spike will add to state debt…for the 136,000 teachers in illinois?

According to an article in the Tribune a while back Rockford’s dist 205 had the highest pension spike penalties in the state. Since 2014 penalties were approx $1.1 mil prior to that about $1.885 Mil for $3 mil total. It’s ironic that the state imposes the penalty yet pays approx 30+% of those penalties(60%taxpayers/10%fed) because the penalty money comes from somewhere deep within the school budget contracts and the state just writes a check blindly without any representation in negotiations. I gave this idea to my local reps. Any money if owed above the state cap whether it was 3%… Read more »

Do these rediculous spike deals blow up the new school funding formula?, or are pension deals not part of funding formula??…can’t keep up with it all.. Also, in terms of give aways in budget to gov labor– pritzler still hasnt realested what he’s agreed to fork over to afsme–but apparently the $100s of millions are in the budget.

“accrued at least thirty-five (35) years of creditable service in the Illinois Teachers’ Retirement System (TRS) under the Tier I plan and be at least fifty-five (55) years of age on the effective date of retirement.” TRS allows for two years (340 days) of service credit for unused, uncompensated sick leave. New Trier lets teachers accrue up to a maximum of 360 days. So this sounds to me like a NT teacher could give their 4-year notice at year 29, which would get them to 33 at retirement, then let them apply 2 years credit for unused sick days, thus… Read more »

NT is probably one of the most snowflake progressive districts in the state right now. The schools have fewer and fewer kids each year, and fewer and fewer tax payers to keep up the ponzi scheme. It’s almost all over. The high school has been declining in the number of students for years now.

New Trier indeed has big, multiple problems, which you will be reading more about.

If I am a union member (or officer) and I fully expect a bankruptcy, wouldn’t I still try to spike the liability as high as possible so that my numerator in the fraction of pension debt / total debt gives me a bigger claim to whatever the bankruptcy court has to distribute? I could rationally agree with those who say that the full pensions will never be paid, but won’t I still come out better in bankruptcy if I can jack the value of my nominal benefit as high as possible? That value would be my trading chip at the… Read more »

Finally, a union member who has the guts to admit his/her true agenda. It’s about greed.

Mike, From your comment are we then to assume that the majority of union members and maybe nearly all of them are primarily motivated by greed in their choice of where to work, how hard to work, what kind of work to do, and how well they should be compensated? Maybe so, but isn’t that a statement as to human motivation in a more general sense rather than applying only or even primarily to union workers. Surely you’re not trying to give far more selfless, altruistic kinds of motivations to non-union workers, are you? People are individuals first, then other… Read more »

Actually, it was refreshing to see a public employee comment about his/her own self interest rather than pretend they deeply care about those they are serving… such as kids/community. It’s a job and of course you want to be compensated as highly as possible. I on the other hand am merely a state taxpayer, and when I see what I’m paying compared to the level of service provided, I see enormous greed.