House Speaker Mike Madigan’s iron grip on Illinois could be nearing an end. His ability to direct patronage, laws and the future of this state is in jeopardy, whether he gets indicted by the Feds or not.

While that’s a cause for celebration, the party should be brief. Ending Madigan’s personal patronage machine is one thing, but unwinding the infrastructure he’s built over three decades is another. That’s the real challenge.

I’m not talking about the illegal stuff. I’m talking about the legally corrupt system Madigan has constructed to maintain power. The real machine is the relationship between the statehouse and the public sector unions, the cost of which has impoverished and chased out ordinary residents, transformed the state into a fiscal basketcase and brought it to the brink of junk.

The machine is made up of thousands of government entities interconnected by collective bargaining laws that grant Illinois unions more power than nearly every other state in the nation. Of course, it wouldn’t be a patronage system without “payoffs.” Illinois doles out some of the nation’s most generous pensions and benefits and then protects them constitutionally. It’s a system that’s self-contained, self-perpetuating and virtually unreformable.

That becomes obvious when you understand just how much control Illinois’ Speaker of the House has amassed over the decades. In Madigan’s rules: How Illinois gives its House speaker power to manipulate and control the legislative process, Joe Tabor and I discovered that no other state grants as much power to its legislative head as Illinois grants to Madigan.

“[Illinois’ House] rules allow Madigan to influence the makeup of legislative committees, how lawmakers vote, and when, if ever, bills get voted on. But the most obstructive rule of all keeps bills – even those with popular support – from ever seeing the light of day. Madigan, and not the General Assembly, has the power to decide what has the chance to become law.”

Madigan built up his system over 30 years and its tentacles have spread to every single city and government entity in the state. It’s deep and wide enough that a new leader can take over and everything will continue, same as it ever was. Plug and play.

Not that a new leader will be as adept as Madigan, but the power will still be there. And so will the infrastructure.

Illinois’ 7,000 units of local government – the most in the country – means tens of thousands of top bureaucrats will continue the fight to preserve what power and money the system gives them. Hundreds of thousands of local workers will still serve as the political distribution arm for the machine. Park districts, school districts, library districts and townships will remain boosters of Get-Out-the-Vote initiatives, supporters of tax hike referendums and promoters of the machine’s bullet points.

Payoffs for their loyalty will continue via some of the most union-friendly collective bargaining rules in the country. In Illinois, if teachers don’t like a contract, they can strike. If public safety workers don’t like the terms they’ve been given, they can force arbitration. The simple threat of either is often enough to get their way. Exhibit A is the Chicago Teachers Union and how it rolled both Mayors Lori Lightfoot and Rahm Emanuel. 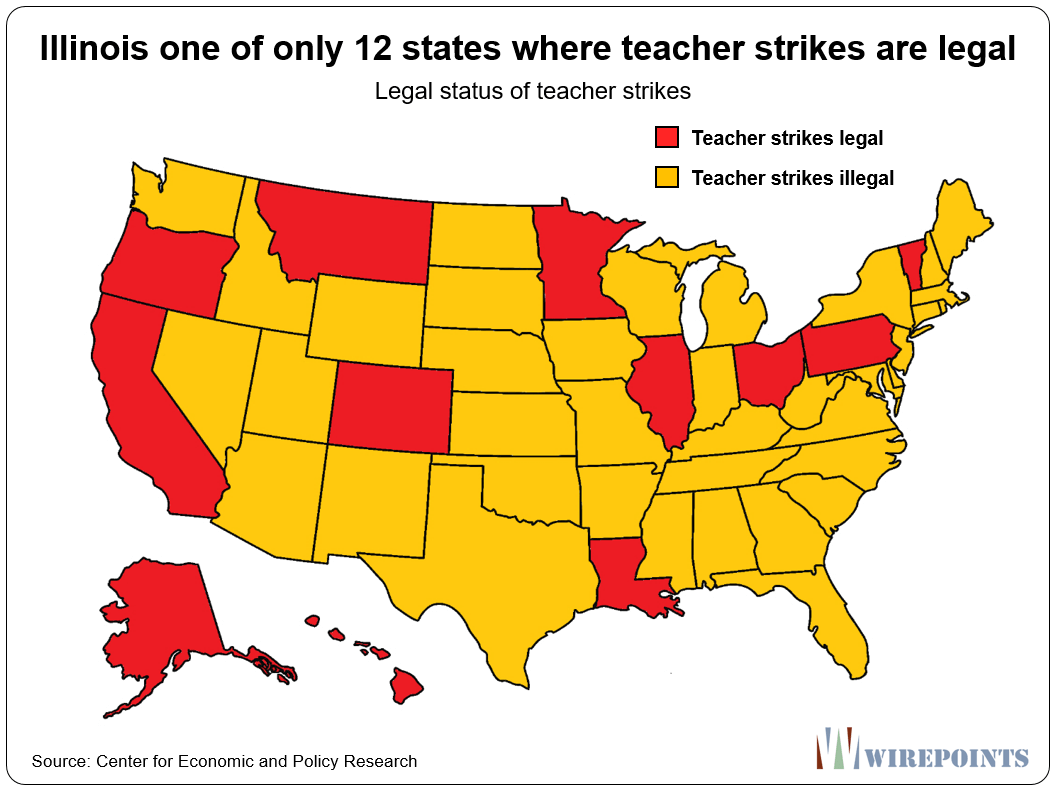 And whatever benefits the unions extract will remain ironclad. The Illinois Constitution’s pension protection clause ensures retirement benefits – for both pensions and retiree health – are nearly impossible to unwind. Prevailing wage laws will guarantee compensation at a level the private sector can’t compete with. Long-term contracts will continue to lock in raises no matter the financial reality governments face. 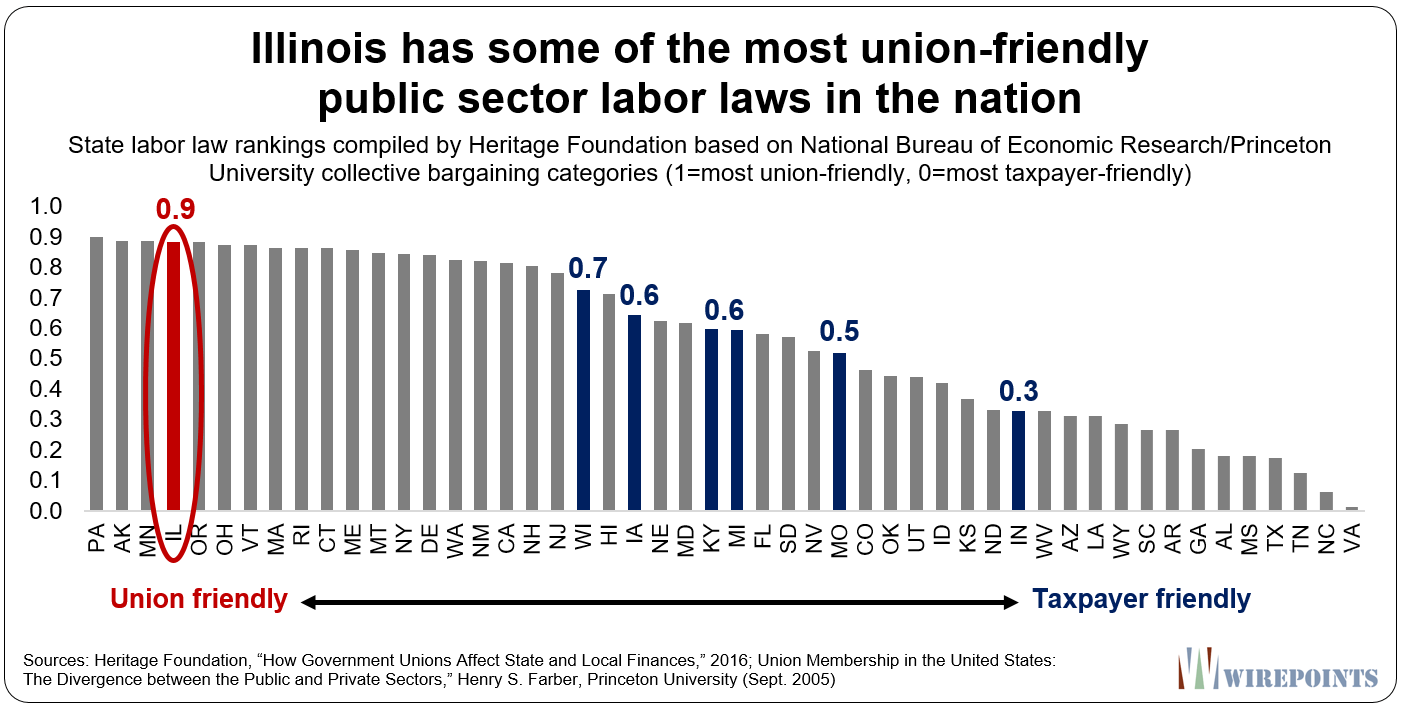 For sure there’s much more that perpetuates Illinois’ legal corruption. Control of the courts. Control of the legislative map. Denial of popular reforms like term limits and ethics laws. All those will remain in place even if Madigan is out.

Unwinding all the laws that favor the system over ordinary Illinoisans has to be the ultimate goal. For now, it’s hard to see that happening. Illinois isn’t broken enough, yet.

But as we’ve said before, the state is still subject to Stein’s Law: “If something cannot go on forever, it will stop.” We’re betting that law will apply sooner rather than later.

Read more about the machine that prioritizes Illinois government over people:

Madigan will live by all the cops and firemen in a beautiful luxury home paid by his HUGE PENSION paid by the honest hardworking taxpayer.
I think we are being SCREWED.

Go back to rehab. Take your medications. Re-visit your psychiatrist.

This fight is like two bald men fighting over a comb.
There is nothing left in Illinois, they have raped it to death.
The only thing left to fight over is future tax increases and who will get to pocket them.
Illinois “Land of Slavery”

Drunk again? Fall off the wagon fir the 10th time?

Poor taxpayer,
you are right. The good people of Illinois only exist to make the state function at all costs. Literally costing everything. My take home jumped 120% just leaving the state. RIP Illinois

Fantastic!! Sure there could never ever possibly be any connection to the systemically pay-to-play/ byzantine ladyrinth of madigan- illinois corruption & the systemically rasist- keepen poor black folks (and folks in general) down on the farm. Wheres the outrage from the blm/ woke??

Madigan will fight. He’s weathered similar, but not as serious storms before. He has money, he has state judges and officials on his side and they will make it difficult for the FBI. Interestingly other state officials in NY, Ohio, NC all got caught with their hand in the kitty too. That’s draining the swamp kids. The true problem is if there is a power vacuum when Madigan goes to jail, the only real outcome that I see is a far left ideologue grabs power. Madigan is horrible for Illinois, and the resulting vacuum will be worse. Socialists will get… Read more »

Jeff, I think you’re right. The only silver lining in that is that they’ll bankrupt the state even faster, meaning the eventual reforms will come sooner…assuming no federal bailout.

The Cutback Amendment (1982) enabled Mike Madigan to become Speaker of the House. ☹️

State Representative Mary Flowers (1985-present) would be a good speaker. 😊

Do you think that Jeanne Ives would have made a good speaker if she still was in office?

I hate to say it, but Madigan probably is not going anywhere. If the feds had anything substantial it would have already come out. It will be difficult to tie anything directly to Madigan. He will have an element of plausible deniability and everything else will just be cicumstantial. Comed will either just pay the fine and pass the bill along to its electricity customers or it will be forgiven.. either way it is not much of a threat. No dem politicans have called directly for his removal (saying he should resign if he is guilty is not calling for… Read more »

I disagree. The case against Sheldon Silver in New York took 5 years to conclude. Maybe the case won’t be resolved over night. But I have every confidence the feds will get to it.

Ohh and speaking of ‘suckers’ , I’m thinking the haircut on the GO Chicago and Illinois junk comes in around 70%, Ie 30 cents on the dollar.BTW who owns that stuff ?? Retirees in Sun City because the yield is so ‘rich’??Who?

Too bad Mike won’t be around for a victory lap, because Madigan’s plan the last ten years at least was to somehow get the feds , taxpayers in the other 49 states , to pick. up the tab for the last 30 years of reckless spending . And Bingo , thanx to the Wuhan Flu , just the ‘crisis’ that Madigan needed . And in a Biden/Duckworth admin, the money will be out the door before the last recount is done . Take a bow , Mike , you earned it . To the rest of the Republic : Sucker!!

No, I don’t think so. In any case, Illinois would be right back to where it started within a year.

The problem that will exist when taking Madigan out is the same problem that happened when the major gang leaders were arrested in Chicago. Instead of having one large corrupt gang to attack you now have a bunch of small gangs that are hard to target. THe same thing will be true if Madigan is arrested. The only way to really do this is a large, and I do mean large RICO case that would arrest a 100 plus people. THis might give some breathing room to reformers that want to come in.

Sad but true. There are many waiting in the wings for his position, and they will NOT willingly give up their long-awaited chance at graft and power.

I can only think of two state legislators (one former) that truly have the interests of citizens in their heart.

The rest are in it for a paycheck and a pension. They couldn’t care less about the future of the state.

The Third Worlders that take over will make Madigan look like George Washington.

This is very true.

The way you have modeled the problem, it sounds like the solution lies in emulating behavior based upon recently witnessed mob incitement in Chicago: Sophisticated operators with umbrellas and masks to obscure identities need do no more than present tools of violent battery to humans with child-like mentalities who pick up the sharpened pvc pipes filled with combustibles and gleefully fling them at fellow humans. You need to incite a mob.You need to provide tools of destruction to this mob. And you need to point the mob at a true villain. However, human physical violence is an ineffective method to… Read more »

Start with the townships.

BK could undo it all quickly. First day of BK, a real Gov gives a ‘How ya doin’ to the union bosses. Then the clawbacks and cuts begin.

They can if McConnell has his way. I predict Illinois will be begging for BK from McConnell.

Great article but you have to get to the core the problem and that is the people that finance the whole operation.

1
Reply
Bob Out of Here
Reply to  Bill

That would be taxpayers since the unions turn that money around and make political contributions with it.

1
Reply
Bill
Reply to  Bob Out of Here

Not by a long shot. The taxpayers are the stooges in this little skit but I think that the sleep of quite a number of them has been rudely interrupted lately…

This single goon has made Illinois number 50 out of 50 states. Put us massively in debt. Destroyed our home values. Taxed away our wealth. Put our kids kids in debt. To name just a few things. There is measurable empirical proof of his failure, yet if you asked him he would deny it all. Illinois is a sh$t hole and Madigan brought it to this end. I have no confidence the FBI democratic party operatives will touch him, we can only hope.

Actually, according to BHO we are 50 out of 57 states…

Mike Madigan is good for Illinois.

The IL legislature, Chicago & Cook County administrations should be under a federal consent decree…

August 7, 2020
The blame game may work, but that doesn't mean the funding will come through.
View Comments (22) | Add Comment