You have to wonder if Gov. J.B. Pritzker ever saw the top marginal tax rates of other states before he released his new progressive tax plan. If he gets his way, he’ll give wealthy Illinoisans another big reason to leave the state.

Today, Illinoisans pay a flat rate of 4.95 percent on their incomes. But under the governor’s new plan, everyone with incomes above $250,000 will get hit with tax rates of 7.75 percent or more. That’s higher than the top tax rates in 44 other states. 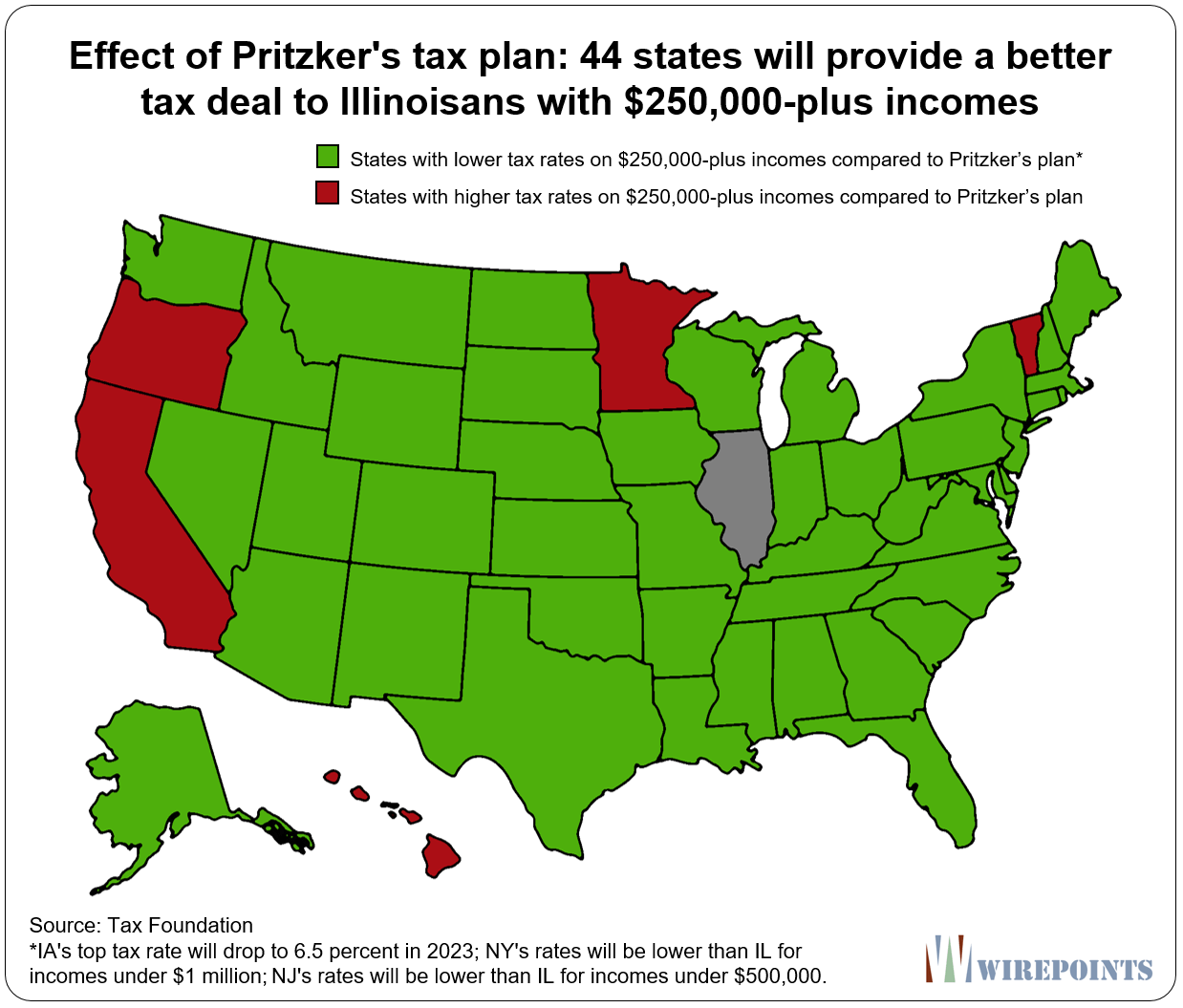 The governor doesn’t seem to have taken into consideration how many of Illinois’ 175,000 tax filers making $250,000 or more may think paying rates of at least 7.75 percent to a state with massive debts, poor services, collapsed finances and a corrupt government isn’t very fair.

If Pritzker thinks they’ll all stick around, he’s mistaken.

His new tax hike will be just another huge incentive for the wealthy to take up residence elsewhere. They’ll get a far better deal on their income taxes if they do.

The wealthy can start by looking at the eight states don’t tax incomes at all. 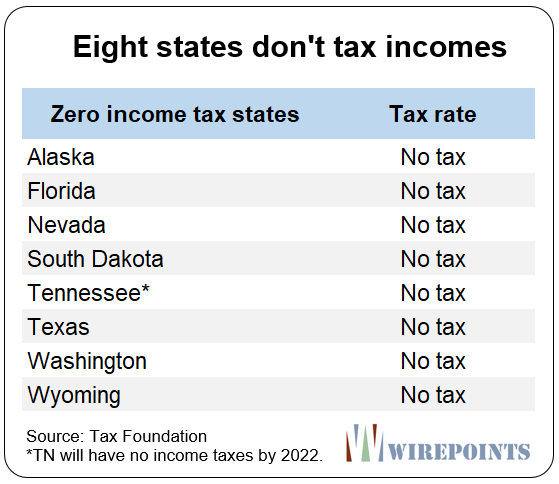 Alaska, Florida, Nevada, South Dakota, Texas, Washington, Wyoming and Tennessee (by 2022) have all chosen not to tax the work people do.

Many of these states are among the fastest growing in the nation. They’ve seen their populations boom as they attract people – including thousands of Illinoisans – every year. Since 2009, Washington has grown by 13 percent, or 870,000 people. And Tennessee’s population is up 7.5 percent – by nearly 500,000 people.

In moving Illinois’ rates higher through a progressive tax scheme, Pritzker is wiping out one of Illinois’ few tax positives – its flat tax structure. 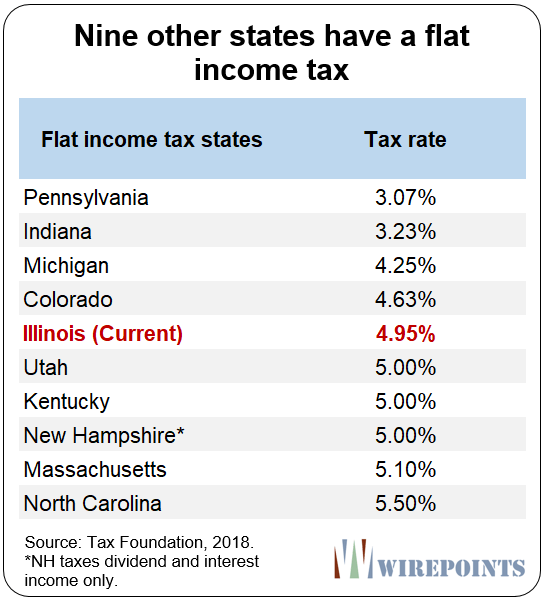 The wealthy will get a better deal in most progressive-tax states too.

The only states where rates would still be higher compared to Illinois would be California, Hawaii, Minnesota, Oregon and Vermont.

Illinoisans are having a hard enough time staying in this state. And the impact of the federal government’s tax reforms – reduced state and local tax deductions – revealed just how expensive high-tax states like Illinois really are.

If Pritzker gets his progressive tax hike passed, the burden on the wealthy will only get bigger.

Read more on Pritzker’s progressive plan and the impact of high taxes:

Ted & John: Great article again !!!!!!!!!! I’ll print it out it’s so good. One correction, an error EVERY ranking gets wrong about the Peoples’ Republic of Maryland, because the Democrats are so sneaky in Annapolis. We actually have a FLAT tax of 8.95% (CALL IT 9% ! ) that starts almost immediately, we have a very low personal exemption ! The reason they get away with it — they have 5.75%, then they tell you to select the County tax where you live and it’s ALMOST EVERY COUNTY 3.2%, to add……so it IS part of the State Income Tax!… Read more »

Slight goof on Md state inc tax……..it starts at 8% and increments upward for higher pay, getting to 9%. Still horrifically high. Our prop taxes aren’t good — $12k for us !

Many reasons why this affects me personally-one of many, I am sick of the dem criminals, pritzy a lying, thieving man who cheated on his real estate taxes, but of course his punishment is to get elected to spread his crimes onto the people of illinois, land of leavin’. However, my future goal to marry a millionaire, drastically stymied if I don’t follow them outta here.

What a great bumper sticker! “Illinois… Land of Leavin'”

My sister used to work from home in Illinois. Now she works at the same company but lives in Tennessee. Many jobs no longer require a physical presence. You can live wherever you want. Maybe someone should let the new gov know about a couple new inventions called the computer and the internet.

Don’t forget about the fact that those 175k people probably pay enormous property tax bills and can only deduct 10k. Everyone has their breaking point — Pritzker & Co are playing with fire. I’m glad I rent and do not own a home here, I would not want to be left holding the bag on an underwater home…

I think the impact of SALT is totally unappreciated here. Now that people are starting to prep their tax returns, especially in high property tax communities, there’s going to be a big wake up call.

With the new standard ded of 24K for couples and that many average income people who itemize rarely get to the 24K threshold the SALT ded may or may not not have as great of impact. My itemized ded are about 12-14 K including property taxes at $7K -State ? Many people did not adjust their withholding properly and were getting a few dollars more every payday and so will get less back or even owe. Will get my taxes in a few weeks and will let you know.

The child tax credit is awesome. In years past I got $0 for my three kids. This year I got $6,000, plus 20% self-employment pass through business deduction and lower tax rates/modified brackets. I paid $10,000 less in federal tax and will do so for the foreseeable future. My state tax stays roughly the same under Jabba’s new tax rates. But it works out well – in 16 years when my oldest graduates high school (and goes to college, likely out of state) it will be time for ME to leave the state. My situation is unique for sure at… Read more »

0
world with end
Reply to  debtsor

Just don’t own a (anchor) house.

The 24k worked out well for us. Property tax is $5800 on a market value town home of about 200k. We would have gotten soaked this year without that because the profit sharing bonus was real good this year.

My real estate tax bill is $7k in the NW burbs of Chicago. My IL state tax bill was $8,545, and appears to stay roughly the same under the Pritzer’s proposed rates. That being said, Federal tax bill was AWESOME for me. I paid $10k less in federal tax this year than last year on roughly the same income. Yes, 3 kids got me a $6,000 credit (I got $0 child tax credit in past year); a 20% deduction for self-employment income and a lower tax bracket over all. This is perfect for me. I can raise my kids in… Read more »

I only recently became aware that rich people can only deduct $10,000. Good grief.