Illinoisans hear plenty about the state’s ballooning pension debt, its billions in unpaid bills and rising bond debts. In fact, many even know about the local pension crises playing out in cities like Harvey and North Chicago.

But most don’t know that the state’s 860 school districts have put Illinoisans on the hook for another $21 billion in debt. In 2002, it was just $12.3 billion. That growing burden is just another reason Illinoisans pay the nation’s highest property taxes.

Illinois has far more school district debt, measured on a per student basis, than its neighbors, with the exception of Indiana. 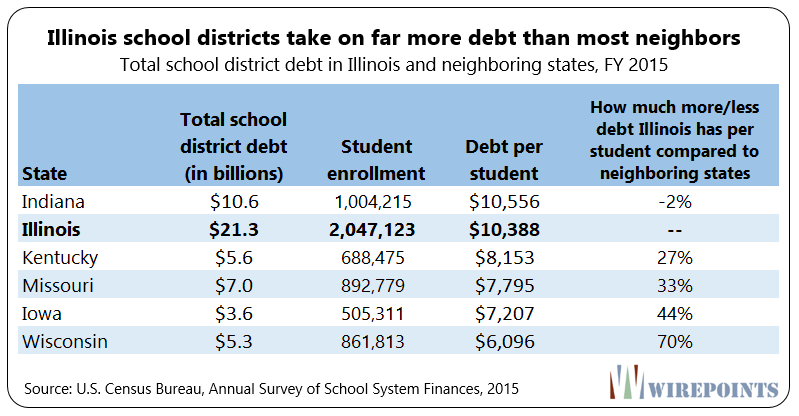 And just like pension debts and unpaid bills, Illinois’ school debt has been on the rise. Total debt across the state is up about 70 percent since 2002. Back then, the debt equaled about $6,100 when measured on a per student basis.

That increase could be explained if Illinois was a fast growing state with many new students and a need for more infrastructure. But the opposite is true. Illinois’ student population is flat when compared to 2002. 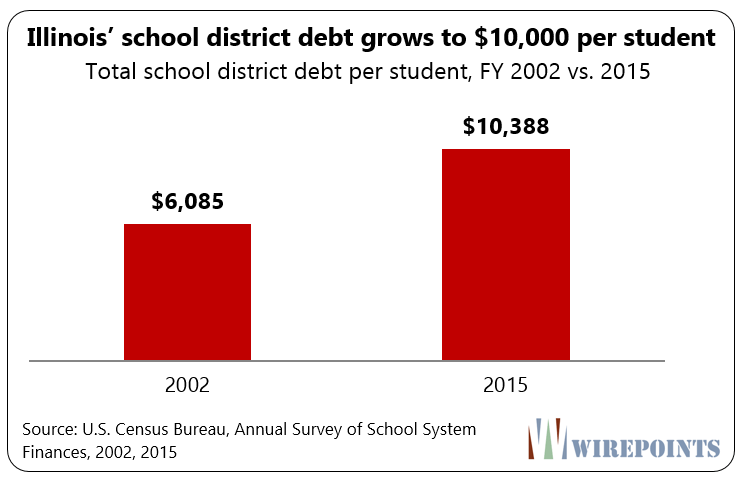 School districts are limited in how much debt they can accumulate – not that it’s stopped many from going far over what the law allows.

The limit is calculated as a percentage of the taxable property in the district (the Equalized Assessed Value) – 6.9 percent in the case of elementary and high school districts and 13.8 percent for full K-12, or Unit, districts.

Across the state, 72 districts exceeded their allowed debt limit as of 2016. In sum, their debts are nearly $1 billion over the limit. That’s according to a FOIA from the Illinois State Board of Education.

That’s only possible because the debt limit the state imposes is full of exceptions and loopholes.

Some school districts have used referendums to go over the allowed limit. Others, such as Waltham CCSD 185, got the legislature to carve out an exception for them.

In all, nearly 5 percent of the state’s total school debt has been issued above prescribed limits.

The state’s 20 biggest offenders, based on how much their total debt exceeds their individual limits, are shown below. 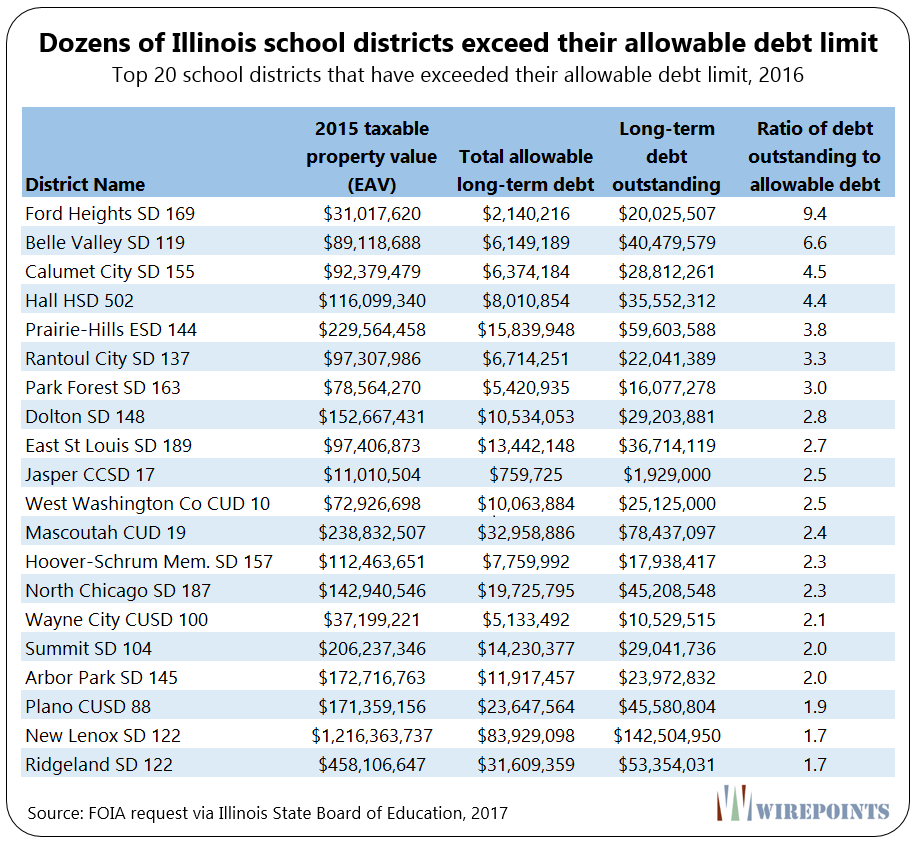 Ford Heights SD 169 is the biggest offender of all. It’s a tiny district of less than 500 students that’s managed to amass over $20 million in long-term debt,  over nine times more than its legal limit.

Attempts to limit school debt recently failed in the legislature. HB 5572 attempted to:

Seems like a reasonable set of reforms. But Illinois politicians on both sides of the aisle, backed by the education establishment, won’t accept even these common-sense proposals.

Is it any wonder why? With school districts having already driven Illinoisans’ property tax burdens to the highest in the nation, taking on debt is one of the few remaining options district officials have to access additional funding.

Additional transparency – like letting taxpayers know just how much debt they’re taking on – is simply too much to ask.

How about this. These kids don’t need new stadiums, new turf, new pool, new this, new that. I don’t know about all of you but the word “NO” or the phrase “No we can’t afford that” was used by my parents all the time. These kids are so incredibly spoiled that we will be very very sorry in a few short years. More money does not equate to better-educated kids!

Surprised total school debt in IL is only $21 billion. 8-9 school districts in Lake County alone have as a group borrowed over $1 billion. Grayslake school district has borrowed over $200 million all by themselves. Wauconda school district is at $82 million and counting. Annual debt service there is over $10 million, about 20% of their annual budget. And somehow they found the cash this school year to hand out almost $5 million dollars in “cash benefits” to every person in the system. So 33% of their annual budget soaked up by a credit card bill and cash handed… Read more »

“Blow up the public service union model, re-invent the school system.” Amen to that!

Are the debt figures in the article principal only, or principal and interest?

The long term debt per student when including IMRF, TRS, OPEB and the latest gimmick, non-referendum debt certificates in lieu of referendum bonds, is even higher.

You got it….just principal.

I think the 2008 Crash never really ended. Did everybody watch the PBS Frontline about Puerto Rico? The destruction is like a Hollywood movie. There is also a discussion about how PR got into debt with bonds issued by UBS.
http://www.pbs.org/video/blackout-in-puerto-rico-340ybo/

It’s no wonder people are leaving the state of Illinois. They are taxing us to death.

And it’s just starting. Taxes will by necessity increase to stratospheric levels.

December 2, 2020
Our answer never seems very satisfying so now we are putting it on you. Have at it.
View Comments (68) | Add Comment