The Civic Federation is back with its annual budget plan for the state. Much like the Civic Committee’s recent proposal, the Civic Fed’s solution to the state’s problems is even more money from taxpayers.

Two years ago, the Civic Federation – a group of Chicago-based business and civic leaders – released a state budget plan laden with $9 billion in new, yearly taxes. They got part of what they wanted when the legislature hiked taxes by $5 billion in 2017. Now the Civic Fed is demanding the rest.

Rather than offering a reform-driven plan, the Civic Fed wants another $3 billion annually from Illinoisans’ wallets.

It’s yet another proposal that lays the groundwork for tax hikes in advance of Gov. Pritzker’s first budget address next week.

The plan’s lynchpin for new revenues is taxing retirement income. The new tax will hit Illinois retirees with $2.5 billion to $3 billion in new taxes. The Civic Fed also wants the sales tax broadened to some services, which would hit up Illinoisans for another $200 million to $600 million a year over the next few years.

That’s about $3 billion in new taxes annually, what they call “Net New Revenue Changes,” on top of the $5 billion income tax hike of just two years ago. 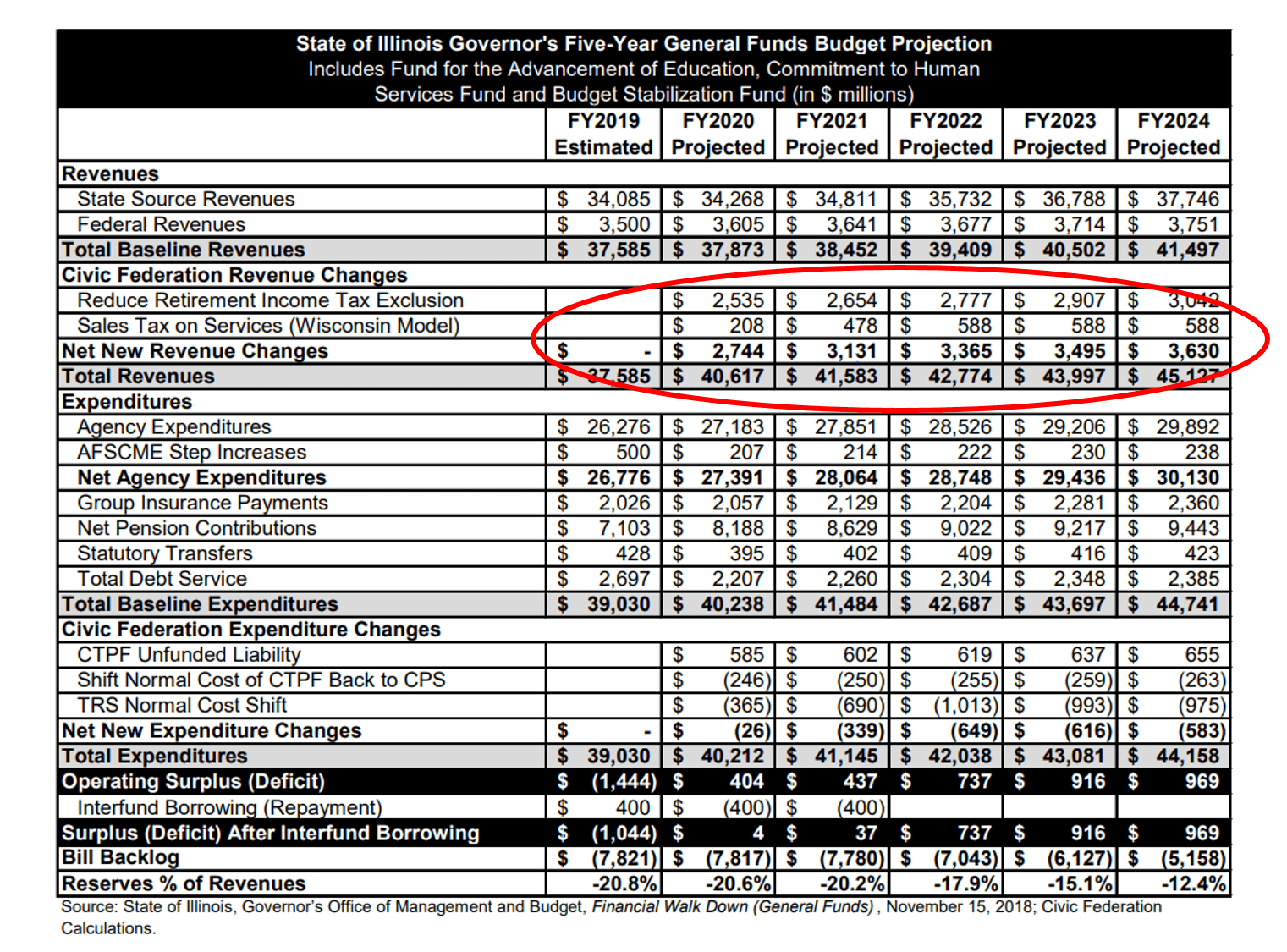 The Civic Fed says the money is needed for fiscal stability, but the group ignores the simple facts that Illinoisans are over-taxed and that the state’s finances are becoming more unstable as more residents leave.

Illinoisans pay the nation’s highest property taxes and their overall state-local tax burden is already the 6th-highest in the nation. And Illinois has already lost 1.5 million residents to outmigration since 2000.

Adding retirement income taxes and sales taxes will only accelerate the exodus of workers and retirees and shrink Illinois’ tax base. Moody’s warned about that in its recent Illinois report.

The Civic Federation’s plan also calls for an amendment to the state’s pension protection clause. Kudos to them for pushing for an amendment – something the Civic Committee refused to consider. Illinois can’t fix its budget problems without reducing its massive retirement debts. An amendment is the only way to do that, barring insolvency.

But any amendment should be worded as broadly as possible. It shouldn’t be worded so it’s only linked to a specific piece of legislation. Illinois has the worst pension crisis in the nation. It’s a multi-tiered problem for many residents. For example, Chicago households are on the hook for $140,000 in overlapping city, local, and state retirement debts. Illinois needs the ability to fix pension debts at the state, Chicago and municipal levels without having to pass a new amendment every time.

That’s a good idea. But any proposal that doesn’t truly reduce the size of university administrations, cut executive-style salaries and lower student tuitions won’t fix the problems in higher education. Wirepoints found the number of administrators in higher education grew more than a quarter between 2005 and 2010 while student enrollment actually shrunk. That’s contributed to a near doubling in university tuitions in the last decade.

The Civic Fed also calls for the Chicago Teachers Pension Fund (CTPF) to merge with the state’s Teachers’ Retirement System. All state income taxpayers would be responsible for paying down the CTPF’s pension debt, now nearly $25 billion according to Moody’s. That arrangement amounts to a Chicago bailout.

It’s unfair and irresponsible to force taxpayers from Rockford to Danville to Belleville to shoulder Chicago’s mismanagement and corrupt finances.

The Civic Fed calls for the state Treasurer and Comptroller to be merged and for the dissolution of townships by referendum, among other useful consolidation ideas.

The plan also calls for downstate police and fire pension funds to consolidate. That has long had bipartisan support and makes sense, though important details need to be worked out. It’s a good idea if consolidation can improve administration and increase investment returns.

But it’s a bad idea if it morphs into a consolidation of downstate pension debts – so that responsible, well-funded cities are forced to bail out the pensions of irresponsible communities. That’s the wrong thing to do.

What’s entirely missing from the Civic Fed’s plan is any attempt to consolidate the local governments that consume nearly two-thirds of Illinoisans’ property taxes: school districts. Over one-third of Illinois school districts serve less than 600 students. And more than 40 percent of districts have just one or two schools. Consolidating those inefficient school districts would eliminate excess administrators and lead to lower property taxes in communities across the state.

A real Civic Fed plan for ordinary Illinoisans would be dominated by tough spending reforms, not billions in tax hikes. Illinoisans have already suffered the burden of ever-higher taxes for decades, with little to no reforms in exchange.

But you won’t see that type of plan from the Civic Fed.

Read more from Wirepoints about the Civic Fed and Illinois’ crisis:

Fantastic article. Since this IS Illinois I have to question if these “civic leaders” companies have a vested interest and profit from this states taxpayers. Looking at the list of these civic leader I can see their businesses are involved with many aspects of this dysfunctional state. Ted’s article on how these people would run their company that is losing money is exactly the way this Federation should be making suggestions. Great job on outling just how foolish these proposals are and for the other article which explains the waste and mismanagement and what SHOULD be done.