Governor-elect J.B. Pritzker may have celebrated his win over incumbent Bruce Rauner, but his resulting hangover will last for more than a day. In fact, expect it to last Pritzker’s entire term.

Pritzker spent $160 million of his own money to be the governor of Illinois, more than double what Gov. Bruce Rauner put in. With that, Pritzker bought the right to take on the fiscal and economic mess of what is the country’s most dysfunctional state.

He may celebrate now, but his own campaign promises for more spending and higher taxes will set him up for failure. Combined that with the mess Illinois is already in, and Pritzker could see the state collapse around him. Call it the winner’s curse.

Unfortunately for Pritzker, the state’s pension shortfall was still $250 billion when he woke up this morning. That qualifies Illinois for the nation’s worst pension crisis.

And the state’s credit rating continues to teeter just one notch above junk. No state has ever before been junk rated. 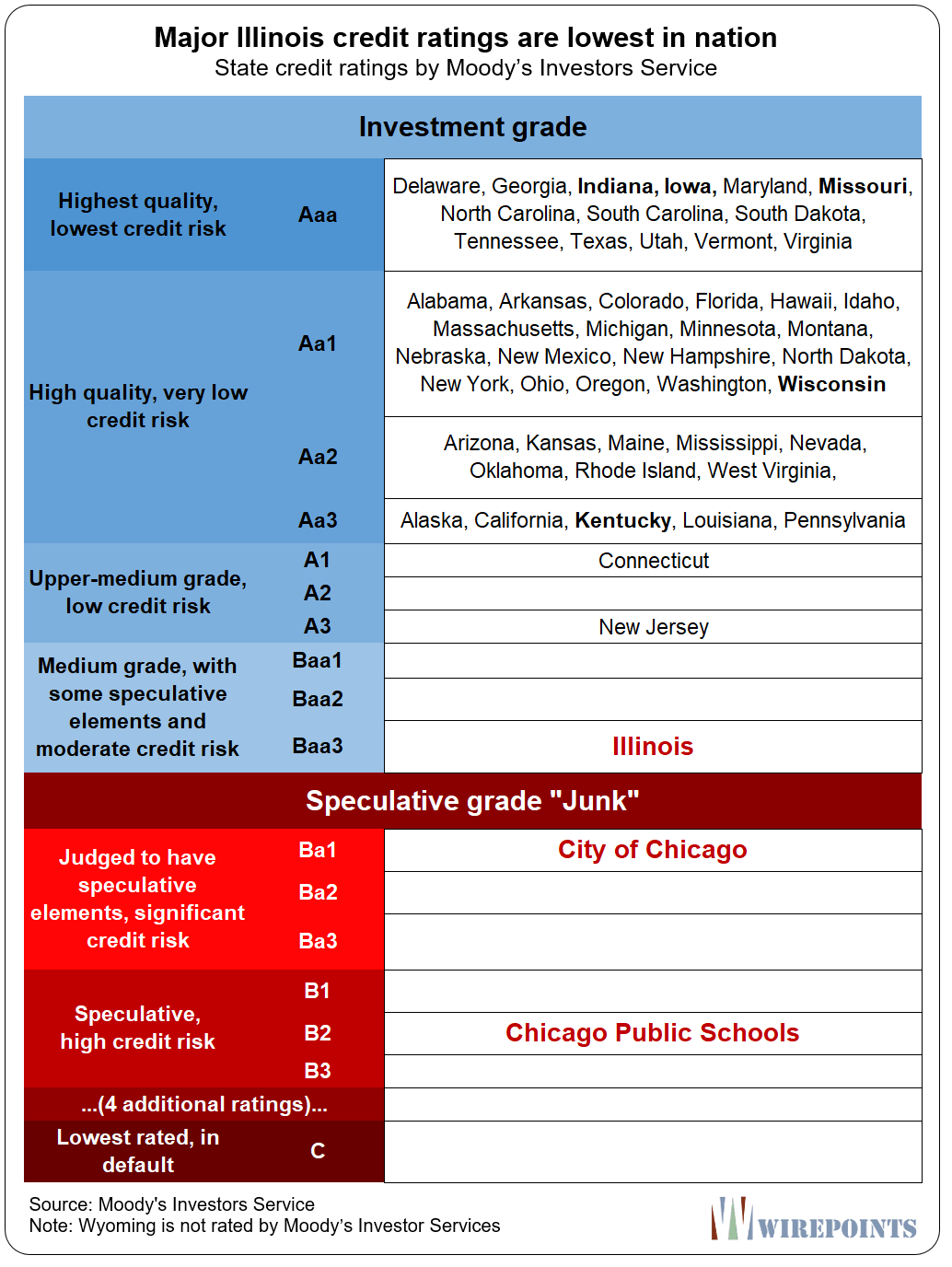 Chicago and CPS are in even worse shape. They are both junk rated, with CPS deep in junk territory. If Illinois doesn’t collapse on its own, count on Chicago to bring down the entire state.

And the state has no rainy day fund to withstand an eventual recession. In fact, Illinois has the exact opposite of a rainy day fund. It has a stack of $8 billion in bills it can’t pay down. You won’t find another state in the country with that much weight around its neck. Numerous studies say so.

Pritzker should expect immediate pressure from the unions that helped get him elected, in particular AFSCME. That union’s contract negotiations have been in “impasse” for more than three years under Gov. Rauner. Rauner held tough on behalf of taxpayers, but AFSCME outlasted him. That was their strategy all along – to wait for a more “friendly” governor.

If Pritzker gives in to AFSCME’s demands, that contract will cost ordinary Illinoisans $3 billion more than Rauner’s last, best offer. The details are here.

Not only will that contract deepen the state’s yearly budget deficit, it’ll push up the state’s pension liability, too. 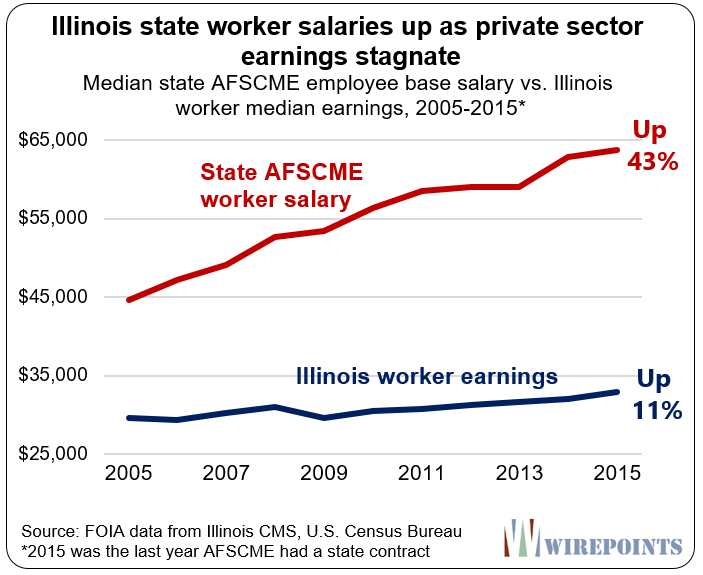 Illinois’ tax base is shrinking. And if it weren’t for a large influx of Hispanics in recent decades, Illinois would have shrunk even more.

The net result is that Illinois’ population has actually declined four years in a row, an outcome shared only with struggling West Virginia. 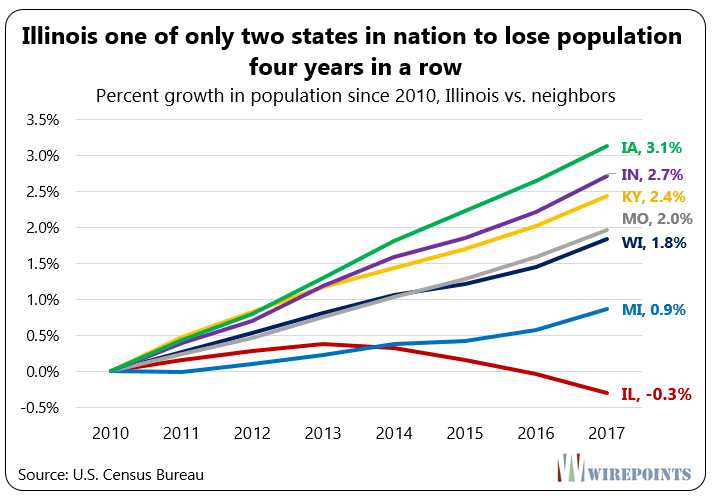 Those depressing results aren’t a surprise for anyone doing the math. I’ve written about those who’ve looked at the numbers and said “I’m outta here,” from a colleague who’ll save $1 million in taxes over the next 20 years to a small-town Illinois mayor who saw a better future for his children in the South.

And what’s worse, Pritzker isn’t likely to get any good news in the near future.

Amazon’s HQ2 is locating elsewhere, to nobody’s surprise. If the reports are true, Amazon will select Long Island, New York, and Arlington, Virginia. Amazon is obsessed with data, and given the mess Illinois and Chicago are in, you know the math didn’t escape them.

Which brings us to Pritzker’s campaign promises and his plan for tax hikes. As we’ve already written, he can’t possibly keep all his spending promises and at the same time keep taxes on the middle class flat. The math shows it’s impossible. Wirepoints ran the numbers.

Pritzker and Illinois House Speaker Mike Madigan could be forced to drop the more extreme elements of their spending and tax agenda as things get worse and outmigration accelerates. They may be too busy performing financial triage. And there’s always the chance that the financial markets force them into accepting some reforms.

But I wouldn’t bet on that. Both Pritzker and most certainly Madigan have shown a willingness to ignore Illinois’ fiscal reality.

Pritzker does so at his own peril. In Illinois, the winner’s curse is real.

He may want to ask Rauner about it.

Declaring bankruptcy means lower state employee pensions (i.e. loss of bought and paid for votes), so that will never happen. Meanwhile our 55 year old retired neighbors wave good bye to us each morning while we’re off to work until we’re 67 1/2. They stand to get $3M each in retirement over the next 30 years.

More than likely, you wont see them in the winter. They will be at their second home in Arizona or Florida. Make sure you pay those property taxes every month. Someone has to pay for those 100k pensions.

Here is my prediction: The teacher pensions will eventually be passed back to the local school districts, with the authority to raise property taxes to whatever level deemed appropriate. Once that happens, real estate values will tank to a point a of no return, creating a massive real estate market of underwater home mortgages. It is conceivable to me that a good number these “homeowners” will simply give up and walk away. (Remember the last recession?) And finally, if one is sitting in a tall sky scraper in Chicago, they will see a nightly, perpetual bright orange glow on the… Read more »

the madigan-dem/ self-serve-0-crate machine for decades has always gotten by setting up the governor as a fall guy /stooge ( like quin-o-kio or who cares if he’s a crook like blago, or rauner) while madigan runs everything behind the scenes. who will they blame now that they own it 100%? jb?
was also interesting on all the rallies and acceptance speeches on tv you didn’t see any of the afsme, seiu, ctu, etc honchos on stage. just mendosa rubbing are noses in it and reminding us all what FAILURES we are.

There are a lot of enthusiastic younger members of Congress now. They are in the same boat. Probably all of them want to spend more money on healthcare, infrastructure, etc.. Nobody is preaching fiscal restraint. I predict they will be facing the reality of how much debt the govt. is in, very quickly. It will be like the Fox show “The Resident”.

“The inspector general’s report concluded an assessed valuation of a mansion owned by Pritzker was reduced from $6.25 million to just under $1.1 million because the residence was “vacant and uninhabitable” with no working toilets.

The toilets had been removed from the mansion ten days before the tax assessor came to look things over.”

It’s game over in Illinois. Last one out hit the lights. Stories about the Illinois exodus and pensions blowing up should be entertaining, though.

I think Wirepoints should help with putting us on an out-migration path. Basically when do we need to list houses, what states should we move too (where incoming residents aren’t going to ruin that state). Etc. The end is coming and it’s time to move on. Get the house on the lake sold, uproot the family from their friends and school and get out. At some point (soon), we really need to start having different articles written and start analyzing data on moving and making sure we all plan accordingly. We know some facts that the Progressive income tax can’t… Read more »

I disagree. Wirepoints should not be trumpeting an exodus. Many of us are stuck here. Not just logistically, but financially. Many of us simply cannot pick up and move easily. And just because we stay is by no means a mandate on how the state is being run, which is how JB and the Gang will read into it. But make no doubt, most of us WILL stay. Wirepoints should continue in the role of rational resistance. Have confidence that people are wising up to the game and are willing to listen. It may not seem that way, based on… Read more »

Nixit, I always appreciate your posts. But your post highlights two problems. The first is that it is not a “wising up,” but that there are too many people on the take, here. They are already “wise” and are simply voting their self-interests with the democrat party. The second is that the “standard” for what is acceptable here continually moves lower and lower. Instead of recognizing that our sky-high property taxes should already be sufficient for a new high school and new facilities, it is now, “pay the unions more AND sell bonds to get facilities you should already have.”… Read more »

Nixit, if you want to stay and pay the bills, be my guest. I’m grateful that our country is large and diverse. Somewhere outside Illinois fiscal sanity exists. If Wirepoints wants to start making recommendations on how/when the collapse happens, and how to respond, I would find that more valuable than articles about trying to rebuild the dead Republican party.

Mike, actually, I don’t think we’ve ever written about how to rebuild the Republican party. We try to stick to policy over politics. And we started making the recommendations you ask for over five years ago, and have written many, many of articles on that.

nixit: You sound like the typical abused and battered woman who stays in a terrible relationship. You are an American, free to travel, work and live how you want. Let’s face it, if you are a homeowner and live in Illinois, your home is no longer an investment. It belongs to the government, who rents it you for the nearly the sole purpose of paying for those ridiculous and obscene pensions. I accurately predicted this financial mess way back in 2001. And it will get worse. Stay if you want, but don’t ever expect your home value to go up.… Read more »

The public employee unions will take every last nickel left. They really couldn’t care less about our “future,” and you can bet that Pritzker and Madigan will cave every time, because, hey, their votes are more important than our well-being.

I predict Pritzker too, will be a one-termer.

It will implode when we hit a national recession. Until then it will just be more slow bleeding, with the unions and their pensions demanding ever more each year.

If I didn’t have assets at stake, I’d be fascinated to watch this thing go.