Illinois is No. 1 on this measure in the fight against coronavirus!

Governor JB Pritzker and many of his supporters recently sent that message on social media by spreading the chart below. Loads of Illinoisans praised it on Twitter with comments like, “Thank you Governor and your administration for leading us through this crisis.”

But take a closer look because it’s more hooey passing as “science and data.” Ironically, Illinois actually does have genuinely good news to report on the virus, but it may convey a different lesson, so it’s a good time to consider a broader perspective on Illinois’ shutdown rule.

The chart Pritzker and his staff circulated was taken from a recent Fortune article. It shows which states are seeing the largest reductions on COVID cases: 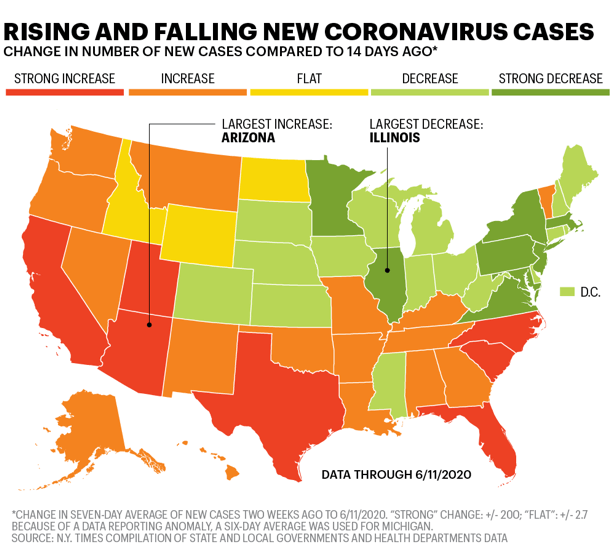 Illinois’ new coronavirus cases are down by an average of 936 per day compared to two weeks ago, the biggest decrease in the nation. That’s the main point the chart conveys.

Multiple problems should be obvious.

First, Illinois also had, according to the article and at the time it was written, the nation’s fourth-highest total case count. Illinois was merely coming off a particularly high base case count compared to other states, making the big drop mean little. The chart and Pritzker’s message didn’t show that.

The article itself says, “Many of the hardest hit states in the Northeast and Midwest…are seeing new infections trending downward.” Those Northeast states got hid hard early and started bending the curve earlier. The chart doesn’t tell us that or that Illinois is among those states hit particularly hard.

More fundamentally, the chart measured just total case numbers, not adjusted for population of the state, so it’s only natural that the biggest moves, whether up or down, would be mostly in the biggest states like California, Texas, Illinois, Pennsylvania, New York and Florida.

And what happened to Pritzker’s earlier message that new case numbers don’t mean much? He said that several times beginning in early May. New case numbers, he said, are “less important to keep an eye on, because the truth is we haven’t tested everybody in the state and no state has and the numbers that get reported are really a function of how many tests we do.” That’s true, but he is apparently happy to cite them when they look nice.

Presumably, the real point Pritzker is trying to make is that his lockdown order has worked and we need to stick with it.

But has it worked? Is it still working?

To date, Illinois ranks ninth worst for the most COVID deaths per capita. With what has been ranked the harshest lockdown rule in the nation, we’d hope to have done better.

Is it working now? Illinois has legitimately good, recent news – trends are very favorable. Hospitalizations are down by half and deaths by 40 percent since their peaks.

But is that due to Illinois’ shutdown order?

If you try to match which states and countries have fared well with which ones have or had strict lockdown orders you will be frustrated. And it’s not hard to find experts saying lockdowns haven’t made much difference, or did more harm than good.

Stanford University Nobel laureate Prof. Michael Levitt says governors who locked down their economies likely cost more lives than they saved. Marko Kolanovic, a  physicist and a strategist for JP Morgan, who reviewed results from many locations, found that lockdowns had little effect. Falling infection rates since lockdowns were lifted suggest the virus “likely has its own dynamics” which are “unrelated to often inconsistent lockdown measures,” he concluded.

Wisconsin may be the best case study because its lockdown order came to a hard stop on May 13 when it was voided in court. As we wrote recently, a study this month concluded that had no effect on the course of the virus, and Wisconsin remains among the states that best have the virus under control.

But suppose that’s wrong and that the positive trend in Illinois is attributable to the shutdown order. That still leaves the most important question – whether it was worth it, in terms of both the economy and lives. On that, consider the recent work by three academics published in The Hill concluding that the shutdown will cost Americans millions of years of life:

The policies have created the greatest global economic disruption in history, with trillions of dollars of lost economic output. These financial losses have been falsely portrayed as purely economic. To the contrary, using numerous National Institutes of Health Public Access publications, Centers for Disease Control and Prevention (CDC) and Bureau of Labor Statistics data, and various actuarial tables, we calculate that these policies will cause devastating non-economic consequences that will total millions of accumulated years of life lost in the United States, far beyond what the virus itself has caused.

Finally, why did Pritzker cite the nearly meaningless new case numbers to show Illinois’ improvement instead of hospitalizations and deaths, which legitimately show that the virus is receding rapidly?

Perhaps because those numbers show how wrong the science and data were that he used to build his case for extending the shutdown order and his for his highly controversial reopening plan. As we detailed earlier, those numbers show that the virus had already peaked before he announced a new, later projection of that peak. His projections were wrong before he even announced them.

I for one have an open mind about many aspects of shutdown orders and about how Illinois should respond if the virus surges again — and it might. But I already know for sure that my opinion shouldn’t be based on anything the Pritzker Administration says and that its reopening plan made no sense from the start.

Fortune should be criticized for that article too. I read it an even though I am no math genius I could see how foolish it is.

Commentors, either continue to complain in vain or leave Illinois and gain some self respect.

2
NiteCat
Reply to  Mick the Tick

I’m tired of commentors like you. Those of us still stuck here have various compelling reasons for remaining. Your remark is totally insensitive to those facts. If you can’t find some empathy for us, then it’s probably better you step away from the keyboard.

2
Mick the Tick
Reply to  NiteCat

Someday you will realize you aren’t a prisoner and can leave your Illinois cell. I guess today isn’t that day. Say hi to the warden for me.

Me too. There are a few trolls here that use this site to hector and dish out defeatist attitudes while contributing nothing to the conversation.

0
UnclePugsly
Reply to  Mick the Tick

So giving into corruption is your idea of self-respect!? No thank you!

2
Mick the Tick
Reply to  UnclePugsly

Uncle, I completely agree the state gov is totally corrupt. That however is not the source of the problem. The problem is it’s people that continually vote those people into office. The voters are extremely liberal and look at the world differently. If you had a realistic chance of changing that, then staying and fighting would indeed be an honorable goal. Unfortunately, liberals are entrenched in their beliefs just as conservatives are equally dedicated to their beliefs. Stay and fight if it makes you feel good, but winning is unattainable, and the financial cost to you and your family could… Read more »

1
PlanningAnExit
Reply to  Mick the Tick

Not an unfair comment – as mentioned below, there are extenuating circumstances that make the cost of the move greater than the benefit… That said, once my window opens, I am gone… That also said, until I leave, I will continue to fight for what is right…

The end result of all of this is further divide. People will migrate to those places where like minds live… Sadly, my thoughts, observations, and comments will not be enough… Too many infantalized adults who are simply not intelligent enough to understand the world around them.

2
Mick the Tick
Reply to  PlanningAnExit

Our lives have several defining moments. One of mine happened when I decided that I couldn’t in good conscience live in and support Illinois. It felt amazing when I completed my exit. I hope you also get to experience that feeling.

I don’t knock folks who leave. That’s sensible and appropriate for many. But reasonable opinions vary depending on circumstances, and you should allow for a different viewpoints about retreats. As for me, I kinda like the Spartan motto: “No prisoners and no retreats.”

“No retreats”, which is exactly what Illinois liberal leaders want, that being for taxpayers to stay no matter the cost. Those that leave are the true warriors. They stood up for their convictions.

One undisputed takeaway: blather works. For those whose moral code forbids succumbing to or utilizing emotionally palliative deceit for personal benefit, there are still relevant takeaways: 1. Illinois residents have allowed power to be concentrated in hands of organisms like this Illinois Governor. 2.Tactics used by these self-serving organisms are successful as evidenced by historical record. Tactics include repetition of the word “science ” while referencing nothing at all, or non-peer reviewed non-vetted data. 3. Tactics such as compiling source-cited data refuting ‘science ‘ claims by regime-in-power are ignored or discredited with emotional ad hominem attacks. Rather than using source-cited… Read more »

From what I have read, most ‘experts’ are in agreement that the enhanced hygiene, and social distancing of the most at risk (nursing care homes) along with the travel bans pretty much did 99% of the ‘curve flattening’.

So when will Pritzker stop granting himself executive powers due to the Covid19? My guess, never until he is forced to – he likes it.

Two points: 1) The Left has always selectively used “Science and Data” as merely an instrument to their ends. The closest example I can think of is Global Warming, which has now morphed into Climate Change. Why did that “morphing” occur? Because of a phenomenon called The Hiatus. This is a long, now almost two decade trend of no warming. So they looked for any statistic that fit the narrative that “things were changing” and decided to rename it Climate Change. How do you prove that the climate is not changing? Exactly. All for the ends of fundamental change to… Read more »