Ask Danville, Illinois, Mayor Scott Eisenhauer if he has any control over his police and fire pension mess and you’ll quickly see frustration set in. “Springfield makes all the rules but localities have to pay for them.”

For decades Illinois has prided itself on being a “local control” state. Local control was originally meant to push authority for policy decisions down to the lowest levels of government – as close to the people as possible.

The reality, however, is just the opposite, and nowhere is that more evident than in the state laws mandating pension benefits for police and firemen across Illinois. State lawmakers impose one-size-fits-all government benefits and local governments – meaning local residents – have no choice but to pay them. For some cities, that’s bringing on bankruptcy.

Eisenhauer knows a thing or two about the local pension crises hitting cities across the state. Danville’s pension funding levels have collapsed to levels that make them virtually insolvent. The police pension fund in 2016 had just 30 cents of every dollar it needs to ensure it can meet its future obligations. 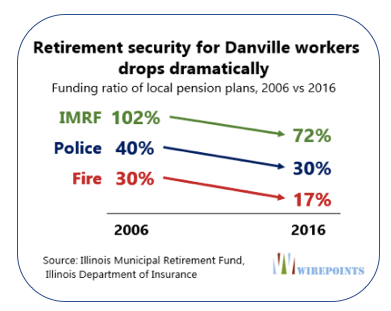 The fire fund is even more broke. It was just 17 percent funded then.

It’s why Danville recently implemented a special pension tax – what Wirepoints argues might be economic suicide for the city – to try to stave off the insolvency of their plans. Danville was featured in a Wirepoints report titled, Springfield fiddles while Illinois cities burn.

Eisenhauer is quick to describe one of the reasons why cities like Danville are in such a mess.

Of the other four components, he’s got little control:

Local control is a farce today and the bloated costs of Illinois’ nearly 7,000 units of government, many of them overlapping, are contributing to Illinois’ highest-in-the-nation property tax rates and crumbling municipal finances across the state.

Illinoisans pay three times more in property taxes than residents in Indiana do, and yet the local pension crises continue to spiral out of control in the Prairie State. 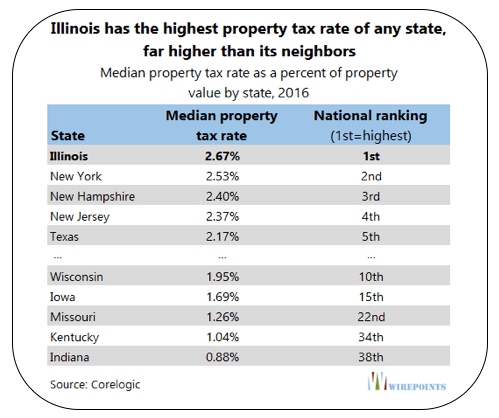 More than half of Illinois’ 650 public safety funds are less than 60 percent funded, according to the most recent data from Illinois’ Department of Insurance. 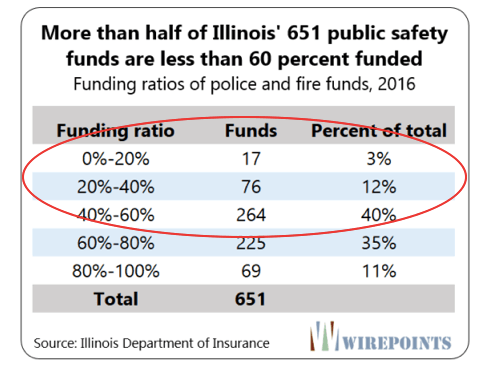 Those local crises won’t be solved by raising taxes. Municipalities can’t endure more out-migration of people and businesses as fees and property taxes have already spiked.

Instead, state mandates like those that set pension benefits, collective bargaining rules and prevailing wages must be eliminated and/or rolled back dramatically. Municipalities won’t recover until local officials can bring the cost of government, and their massive debts, back to levels their residents can afford.

And for Eisenhauer, the solution for pension benefits going forward is easy. “I already compete with other cities on many factors, so let me compete on retirement benefits. Get the state out of it. They are not helping us pay for them anyway, so we won’t lose anything financially.”

Eisenhauer wants local governments to offer their own local retirement plans to their workers, whether a pension, a defined contribution plan, or even nothing in exchange for higher salaries.

For many cities, though, the days of structural reforms and a change in pension benefits have probably passed them by. For those communities, local bankruptcy – currently not allowed under Illinois law – might be the only option that can both protect retirees and allow cities to restructure their overwhelming debts. Danville may be a candidate.

The bottom line is this: Illinois can’t afford a system where one entity of government establishes all the rules and benefits and another unit of government is forced to pay for them.

It’s a formula for bankruptcy.

The Mayors DO have control, they can FREEZE/reduce/limit base salaries and overtime. THAT is how you can control the pension fraud. Just FREEZE the base salaries. If the PoPo and firewhiners are unhappy then bye-bye, don’t let the door hit you on the way OUT. Let them go out into the real world and make the billions that their GED or HS diploma demands…

Rex, to some extent you are correct in that they can control hours and battle the limits to increases. But forced, binding arbitration is a big limitation to just how much munis can negotiate with the unions. Same at the school districts – the teachers union can go on strike here in Illinois. We need to give the local govs more power to negotiate better deals for taxpayers. And that means major reforms to collective bargaining powers – including eliminating binding arbitration.

“Illinois can’t afford a system where one entity of government establishes all the rules and benefits and another unit of government is forced to pay for them.” Or, could it be said that Illinois can’t afford a system where one generation establishes all the rules for its benefits and tax levels and another generation (or two or three into the indefinite future) pay for them? The courts have rules that “Springfield” can’t change cut benefits either, and Wirepoints didn’t like the Chicago Fed’s idea for collecting taxes from those who enjoyed lower taxes in the past. Why are the retired… Read more »

For the average uninformed citizen… How much higher must their property tax escrow payment be over their mortgage payment portion before they wake up? In the next decade will it be commonplace for tax escrow payments to be consistently higher than the mortgage in Illinois? Home values decrease as taxes increase if the only purpose of that tax is to service pension checks being mailed to Florida or Arizona.

But they still have the ability to determine if they use outside contractors, 2rd party firms etc to do their staffing. They can also mix a police force between public sector police and private sector police firms. Same with firefighters and almost all municipal functions. I have voiced hiring objections may time sin my community when they add a new position that could be fulfilled easily via contracting. They simply do not care and happily go about adding more direct public sector employees. A few years ago I hired a business system analyst for my crew for a multi-year contract… Read more »

P M, you are right in many ways and I am sure at the margin (maybe even a big margin), these things can be done. But to do it at scale is tough. The laws our legislators have put in place give the unions the power to block systemic change. Here is an example of North Riverside. http://mobile.rblandmark.com/News/Articles/10-3-2017/North-Riverside-waves-white-flag-on-fire-privatization/. The same goes on with public construction. Prevailing wages become an impediment even for teeny, practical things. So with you, but it’s going to take an overhaul of laws to get things truly fixed.

I read the article you so kindly listed.

It really just highlights the correct solution, on an individual basis, is out-migration. There is no logical reason for anyone who can get out to remain.

As I have said for some time, Illinois is not longer a state to aspire to, but a place you fall down to.

May 29, 2020
Was it because his “science and data” somehow changed? Or was it because he feared having his vast emergency powers challenged in the United States Supreme Court?
View Comments (12) | Add Comment