“COVID-19 Thanksgiving warnings may have worked in Illinois,” wrote the Journal-Star on Saturday.

That may well be partly true.

However, the numbers are now undeniable that another factor is having a powerful impact suppressing the virus – a factor that continues to be almost entirely ignored: A huge portion of Illinois is now almost certainly immune to COVID-19, probably just over half. That’s a direct and simple implication of government numbers, though officials don’t say it outright.

“Government and health officials across Illinois issued grave warnings in the weeks preceding Thanksgiving, the JournalStar correctly wrote, “in an effort to keep holiday gatherings from causing a surge in COVID-19 cases.”

But as the JournalStar further wrote, no surge occurred. Hospitalizations and the number of reported cases began dropping meaningfully just before Thanksgiving. The drop continued through the holiday weekend and persists through today. Our daily update of charts on those Illinois Department of Health numbers is here.

Hospitalizations, which most experts now regard as the best indicator of the COVID’s prevalence, have dropped steadily from about 6,100 to about 5,100 since November 22. A Thanksgiving surge, if one had occurred, would have showed up in the hospitalization and case numbers by now. According to the CDC, the average time from infection to hospitalization is 7 to 16 days.

Do warnings alone account for the avoidance of a surge?

Hardly. A key is the true number of infections. It’s about eight times the reported number of cases confirmed by a laboratory test, according to what the  Center for Disease Control is now using in its modeling. Most cases go unreported because symptoms are usually mild or not noticed at all.

And since Illinois now has about 850,000 reported cases, that means 6.8 million Illinoisans have been infected, most without ever knowing it. That’s well over half of the state that is almost certainly immune for a significant period of time. The virus, in other words, is running out of targets to infect.

Run through the same numbers for the nation as a whole and you will again find that much of the population should be immune — about 38%.

That 8X multiple used by the CDC isn’t certain. Other estimates range from 6 to 24, according to the CDC. But even if it’s only 6, that would mean 5.1 million Illinoisans have been infected and are immune. That’s about 40% of the state’s population and would still be a powerful restraint on the spread of the virus. Gradual arrival of vaccines, of course, will further speed the expansion of immunity.

Maybe the virus will spike again for reasons unknown, as it has before. And none of this is to say that official warnings to be careful haven’t helped or that they should be ignored. That’s primarily true for the older population and those with known risk factors, who comprise the vast majority of deaths. We continue to hope they will be extremely cautious and that policy-makers obsess about their protection.

In other words, the virus is real but some of the numbers and explanations aren’t.

Read more about COVID-19 in Illinois:

Explain to me why everything has been opened in Indiana for several months and their cases are no worse than ours? Maybe because lockdowns are pointless? My wife and I live in east-central Illinois and have been going to Terre Haute every so often to buy groceries, eat out, and shop like normal Americans. It is a shame we have to drive 1 hr 15 mins to do so but it is what it is. We even have tickets to go see the new Wonder Woman movie on Christmas Day in Terre Haute. Spend our money in a Republican controlled… Read more »

I dunno where you guys live. The hospitals in Lake and Cook counties are loaded with Covid patients, the nurses are all hands on deck for the time being, at least everybody who is healthy. Some hospitals are putting 2 patients in single rooms and cancelling surgery sin order to use the surgical area for overflowing inpatients. Vacations and time off cancelled for nursing and technical personnel in some hospitals. The Wirepoints Covid hospitalization numbers are down a little from 2-3 weeks ago but still above the peak reached in the spring surge here. Death rate lower due to contemporary… Read more »

“Nobody really knows why we are in the midst of a second surge but as usual lots of BSers claim to know.”

Because it’s in the air we breathe anytime we are indoors. And we spend more times indoors. In our house. In fact, something like 3/4ths of all transmissions come from households. That’s why it spreads. You limit the number of places people can go, and they all cram into the same places and spread the germs around.

That was an interesting and relevant post. It seems many people rely on instincts and superficial insights and maintain pride in the face of ignorance. The difference between “red” states and “blue” states, in terms of restrictions, is quite marginal. The virus does not care about what people believe or their tribal thinking. Dealing with this virus has been challenging but there have been so many unforced errors. Why is that? i just came through this article, which is fascinating. The message: why should a vaccine be “forced” on you when your chance to heal is 99%. Unfortunately, there appears… Read more »

Hospitals in Lake County have seen a decline (12 days), or stayed flat (2 days) all but one day this month, and that one up day was December 1st. There has also been a dramatic drop in the Governor’s favorite metric “posititvity”…which even his own scientists called bunk, then he had them gag ordered…etc. In fact, Lake County meets most of the metrics to move back to Tier 2, or whatever made up Phase of the day the Governor has, but he won’t do it because “maybe” there will be another bump

That is exactly right, numbers are going down and the sorry Gov of this State says the numbers “might” go up due to the Holidays so we have to say locked down. At what point will the people of this State stand up to this sorry excuse for a Gov. Just like the numbers were supposed to go up in IL from Thanksgiving, didn’t happen. The more you lock people down the more they will gather. What is next, the vaccine comes out and next he will be saying “well, we don’t know if it works yet so we need… Read more »

I think JB is just angry cuz he knows it will take about 100 doses of the vaccine to penetrate all of his blubber to do any good,plus can you imagine the length of the syringe theyre gonna have to use?!-do they make syringes that are 1 ft in length!?

Please explain this to me. Back in Mar-May we were told not to wear masks then we were told to wear them, so from mid May until now I have seen more people wear masks than I have ever had before. Why are the numbers higher now than back in Mar-Apr when more people are wearing masks than ever before? I would like someone to ask that question to the loser politicians and get an answer from them. Because they don’t work. Just like someone else said here, the virus is out there, it is not going away no matter… Read more »

So the scientists were wrong AGAIN?

If you use 70% for herd immunity and the NYT value of 10x for undercounting of cases, half the country will reach H.I. in the next 3 weeks (6 states already have). The 6 mentioned are interesting – Iowa, Nebraska, Utah, Wisconsin, and both the Dakotas. 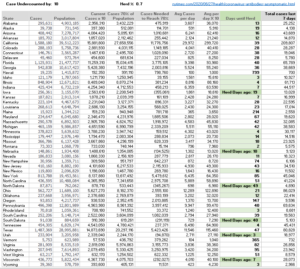 Yes, and many experts say the herd immunity threshold is much lower than 70%.

I had Covid19 in September/October and wouldn’t wish it on anyone but would gladly have it all again just to make sure I have the anti-bodies and T Cells and can say to hell with masks and those telling me this is some thing to be feared. It ain’t . Many already had it in February as they are finding out and are immune too. It’s all B.S.

Now they’re trying to use hospital capacity to instill fear. The truth is, the capacity use we see now is pretty normal under any circumstance. Hospitals don’t make money until their bed use reaches at least 70% of all available beds.

They are closing schools and restaurants, though NEITHER has been shown to contribute to spreading.

This is about trying to get money out of Washington DC pure and simple.

The boy that cried wolf routine is really getting old & tiresome…

When I read or hear about covid doom, my eyes glaze over & I get a static buzz in my ears…

Unfortunately our “leaders” pride (& fear) will not allow them to admit they were wrong, so we are stuck in this *covid Groundhog Day*…

You’d think after batting 0.000 with hysteria follow-through (large gatherings, Sturgis, football games, beach goers), they stop with the hysteria. But the drumbeat will continue.