Mike Madigan’s tenure as House Speaker is over after nearly 40 years at the helm. In his place, Democrats have elected Hillside Democrat Emanuel “Chris” Welch to lead the chamber. Welch was elected Speaker when the 102nd General Assembly convened at noon on January 13.

Madigan’s loss of power is a monumental change, but just because he’s gone, it doesn’t mean Illinois’ problems are over. 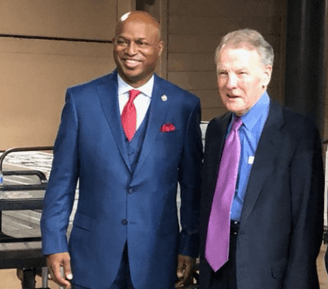 Madigan, whatever his faults, knows how to win elections and he built a massive, experienced, disciplined organization that serves that goal. The Machine thrives thanks to policies designed not to serve the public good but to empower itself: Illinois’ “House Rules,” onerous collective bargaining laws, constitutionally-protected benefits, the nation’s largest local government network, politically-drawn legislative maps and more. Those all keep the current political class in power.

The cost that system imposes on ordinary Illinoisans – high taxes, falling home values, growing debts, etc. – is enormous. Too many Illinoisans have concluded that flight is their only recourse, resulting in lost population and a crippled tax base. No state is losing people like Illinois is.

Unfortunately, there’s no sign that this new legislature will pursue any of the reforms needed to turn this state around. If anything, they doubled down on spending this week when they passed bills that give Chicago firefighters bigger pensions, the Chicago Teachers Union greater bargaining power, and more education and business equity funding.

Their actions will accelerate Illinois’ fiscal decline. And when the state hits bottom, real solutions that can transform Illinois must be ready. That’s what Wirepoints is laboring to provide. We’ve already put together the most necessary reform of all: a comprehensive pension solution. Learn all about it here.

Illinoisans may want to celebrate that Madigan is finally gone. But the real celebration shouldn’t begin until his political machine is finally dismantled and better policies put in its place.

Nothing will change till pension reform and cut fat out of Illinois government. Starting with on 750 depts 2x the number of other states. Political jobs created that do not help our State. Stop free ride for illegals do you think an American would get same treatment in foreign country. Now Governor says keeping aid for small businesses because state needs it on top of that raise taxes on failing businesses great idea. I think maybe even your die hard Democrats voters have had enough of Illinois politics. I hope this brings forward a change in Illinois government of cut… Read more »

“I think maybe even your die hard Democrats voters have had enough of Illinois politics. I hope this brings forward a change in Illinois government of cut back and manage instead of take from residents.”

That’s adorable. Did the Democrat super majority that was just voted in 2 months ago give you that impression? Maybe it was the bill that just increased firefighter pensions? Maybe you’ll be even more convinced when they raise taxes in the next few months?

In his praise of madigan–
“While our state has many problems, our schools are better, more children have access to healthcare, and our working-class families will easily live the American Dream,” Welch said. WHO THE HECK IS HE TALKEN ABOUT???

This guy is nothing more than a Madigan nut swinger

Easy on the language, please.

but it’s the truth! Ha

This state just needs to hurry up and OD, addicts don’t quit until they reach dead bottom.

You are just replacing the Captain of the Titanic.

Hate to break it to ya fellas, but faithful Madigan lieutenant Welch is just a seat warmer, there ’till the heat blows over. Or longer if it gives Madigan a freer hand with less exposure.

Anyone who thinks Madigan isn’t still in charge, running The Democrat Machine that passes for our State Government, is delusional.

It doesn’t matter who the speaker is anyway, they just needed a black one to interface with Washington. A total federal bail out is around the corner I fear. Biden is talking in the multi trillions, with numbers like that you know damn well public sector union pensions are a line item. The woke in Washington may shaft the police unions though in that bail out, but you better believe teachers unions are in the bail. If responsible states complain, they will be bought off with a piece of the pie. The next administration has no concept of federalism, states… Read more »

😊 Thanks for the reminder of happier times!

“Madigan, whatever his faults, knows how to win elections and he built a massive, experienced, disciplined organization that serves that goal. ”

Union donations and gerrymandering are 95% of his power. Madigan isn’t some evil genius. He’s the only competent guy in the entire legislature.

I expect his machine to crumble a bit as union money gets spread around to hedge bets.

Wishful thinking. The patronage, kickbacks, and Union money that built The Democrat Machine aren’t going anywhere, and neither has Madigan.

Agree, also will all the trial lawyer/ realestate lawyer $ keep rollen in to Welch? Will he control the funds? The lawyers are a huge part of the machine and always fly under the radar.

I’m already yearning for a return to the glory days of Madigan.

They are about to turn this state into Zimbabwe.

If the crap that seems about to become law is any indication, you’re right. I never thought I’d be in a position where I had to rely on Gov. Toilets to veto legislation.

Idiocy fueled decline is worse. You can fix a corrupt politician by upping the offer. You can’t fix stupid.

Even though Madigan will still wield power, it isn’t the same. Madigan was always cautious when he had complete control. He won’t be able to totally control the woman beater Welch, and he certainly can’t trust him. Madigan’s paranoia will paralyze him now. It will be fun to watch.

“In Chicago, we love our crooks!” – David Mamet.

Obviously David meant to include the entire state of Illinois in that quote. What else is there to say or comment on… This will not change anything in Springfield.

Same S8&t different day. this guy is nothing but an empty suit. Madigan will be the puppet master pulling the strings from off camera. Nothing will change, same corruption, same graft , same everything and in fact it will most likely get worse. Already has, with the most recent increase in state employee benefits, removal of cash bail, Law Enforcement “reform” bill, etc. Headed into the dark now.

I think you mean Machine Democrat

Being a clever crook doesn’t make you smart, it simply means you have no problem breaking laws to have your way or get your Grift. That really is the culture of today’s Democrats. There is no motivation for Democrats to change because there is no accountability.

It’s a Who moment.

“Meet the new boss, same as the old boss.”

Pretty much the same Representatives and Senators, with Democratic supermajorities in both houses.

And, of course, Mike still pulling the strings with the Illinois Democratic Party.

I’d like to be at least a little hopeful about all this, however I fear that it’s like hoping we’ll wake up tomorrow and discover that the sun’s risen in the West, and that pigs can fly.

I fear you are right. We’re rapidly approaching the point where our only logical course of action is to vote with our feet. It’s the only election the Democrats can’t rig.

Welch was the one who pushed for an IL law to have a certain amount of minorities on boards of companies based in IL. Anyone thinking this is good is delusional. People should be based on qualifications, not race, gender, religion etc.

boy o boy, are you living in the past

r neville is right, we now live in a dystopian future where merit means nothing, and the rule of law is based on subjective, ever changing and almost daily shifting standards of ‘diversity’ and ‘inclusion’ to include more and more niche victimized and grievance based classes. It won’t be long before excluded groups will include self-identified furries, fairies and warlocks, or based on physical attributes like short or tall, or specific ethnic based group (i.e. there are not enough Arcadians or Armenians on a particular board), and so on. It won’t be long before the government mandates a specific number… Read more »

Master of puppets im pulling your strings,twisting your mind and smashing your things,blinded by me you cant see a thing,just call my name cuz i ‘ll hear you scream-Metallica

Jake from State Farm would approve. Only the best and brightest in this state.

Meet the new boss, same as the old boss. Welch is One of Madigans stoogies, always was. Nothing will change.

The people of Illinois Will Be Fooled Again

No. We’re beyond being fooled. We know what they are doing to us; we just can’t do anything about it.

Throwing out that garbage won’t make a dime’s worth of difference. Illinois is beyond repair. He has left behind quite a legacy. I hope his decades of loyal voters are proud of themselves. Will that scumbag go to prison? Not bloody likely.

Excellent analysis as usual by Ted. But the departure of Madigan doesn’t mean true reformers have taken over The Woke/BLM crowd will push for equity, justice, transparency and on and on– none of which has anything to do with the major problems Illinois is facing. Illinois needs tax reform, pension reform, job creation incentives, property tax relief, serious anti violence programs, manufacturing incentives– and a total image remake. None of those will be a priority for the new legislature And their ability to get anything done politically is still a huge open question. I hope a lot of readers will… Read more »

Old Spartan – I agree with you. I think the situation will only get worse. Woke initiatives and socialist policies require money, and lots of it, to redistribute, whether allocated directly or indirectly by government. The state has a pension hole easily (the real one, such as Moody’s suggests) six times its annual budget, a benefits hole almost twice the annual budget, and that is before even considering any state services to be delivered to the population. Limited capacity to borrow more, high debt carrying costs, unpaid accounts payable at 7 billion but likely more, and unfunded mandates ever increasing… Read more »

ABOUT US
© Wirepoints Corp. 2012 - 2020. All rights reserved.
Contact us: admin@wirepoints.org
FOLLOW US
wpDiscuz
45
0
Would love your thoughts, please comment.x
()
x
| Reply