Don’t be surprised if Illinois politicians say they want to pursue yet another bad borrowing idea in the near future. This time the excuse won’t be to pay off pensions. Instead, it will be for health insurance benefits owed to government retirees – benefits that are formally known as “other post-retirement benefits,” or OPEB.

S&P Global Ratings recently wrote about the increase in retiree health debts nationally. Most states have set aside little to nothing to pay for them, but there is increasing pressure to do so as accounting rules change. Consequently, S&P reports that states might try to borrow money to help pay down those retiree health debts: “…many governments are seeing large new OPEB liabilities on their balance sheets that are growing due to insufficient contributions. In response, governments are looking to OPEB obligation bonds (OOBs) as a way to address funding concerns. Depending on the circumstances surrounding the OOB, issuance could have rating implications.”

Illinois has $73 billion in health debts and it’s likely politicians won’t be able to resist the temptation to borrow money to pay some of that debt down. But they should be stopped at all costs. More borrowing will only allow them to kick the can, just as they’ve done on pensions time and again. Instead of more debt, lawmakers should pursue reforms that dramatically slow down the growth in benefits.

Illinois’ retiree health insurance debt is equal to more than half the state’s $134 billion in officially-reported pension debt. Add them together and that’s more than $200 billion in state retirement debt. 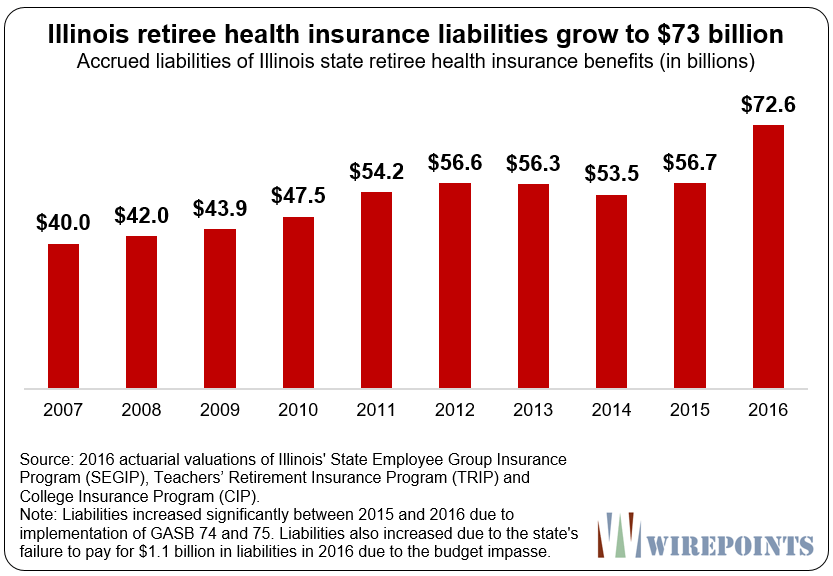 The $73 billion is how much the state owes, in today’s dollars, in health insurance benefits over the next three decades. The state has set nothing aside for that obligation, so it’s 100 percent unfunded.

In total, the state will pay out over $166 billion in claims through 2055, according to the programs’ actuaries. The state has been paying out more than $1 billion a year to retirees recently, but that number will jump to nearly $6 billion in 25 years (see Appendix 1). That, along with ever-growing pension costs, will continue to crowd out spending on everything else in the budget. 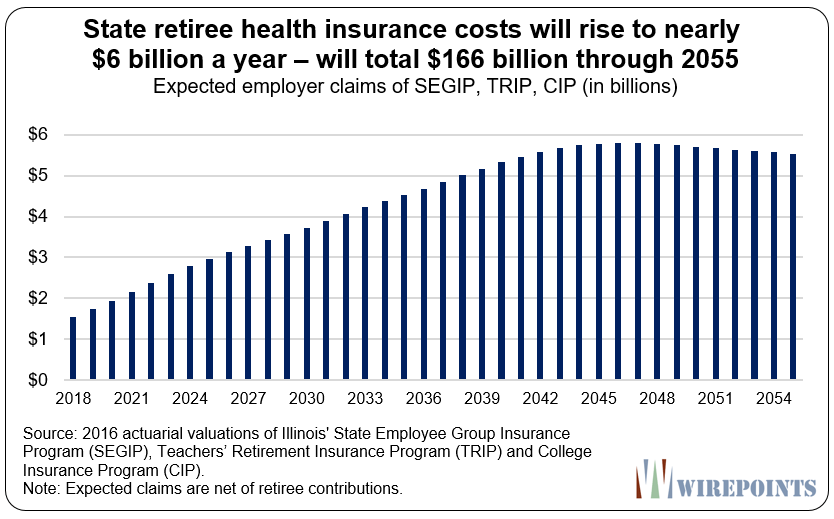 S&P warned about those growing costs in its recent report: “costs likely will increase rapidly as the medical cost trend has been approximately 6.1% for each of the past five years, far outpacing the consumer price index…Also, baby boomers are expected to retire at an increasing pace for the next 10 years, placing a further burden on providers of retiree health care. Escalating contributions present intensifying budgetary stress for municipalities and potential stress to overall creditworthiness.”

Illinois’ retiree health insurance debt is one of the biggest in the nation. Every Illinois household is on the hook for over $11,000 in health debt. Only households in six states owe more.

The debt is getting more attention as accounting rules get stricter and force governments to deal with them. It’s even more alarming in Illinois since the Supreme Court said in a 2014 ruling that these benefits can’t be reformed because of the state’s pension protection clause.

For a long time Illinois politicians have been able to ignore retiree health debts. They thought they’d have the option to change benefits if a cash crunch ever came.

But the court says they don’t have that option. And lawmakers refuse to consider the only real solution: an amendment to the pension and benefit clause in the constitution.

So, look for Illinois pols to try to take the OPEB bond idea and run with it.

We’d go into why those bonds are a bad idea, but we don’t need to. We recently explained why their identical twin, pension obligation bonds (POBs), are nothing more than a bad gamble with taxpayers’ money. We wrote extensively about Mayor Emanuel’s proposed Chicago POB in 2018. And we criticized Rep. Robert Martwick’s idea for the state to borrow over $100 billion in POBs early last year.

The state has consistently paid far less toward its retiree health insurance obligations than its actuarially-required contributions (ARC) call for. Because the state only pays the insurance claims on a pay-as-you-go basis, its payment shortfalls have been $2.5 to $3 billion each year. 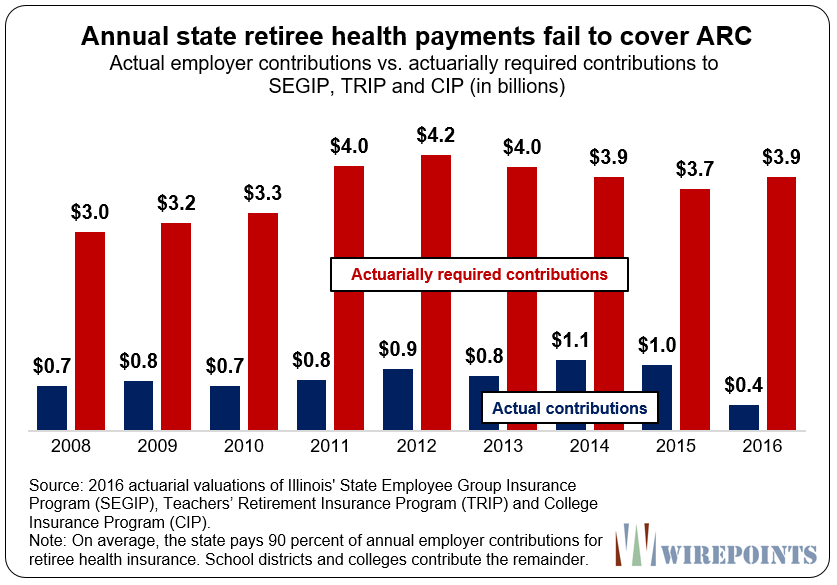 They should have a GASB 68 (2.0) to require the borrowers to state on their balance sheet how much of the long-term liabilities are actually POB’s. That might be a disincentive not to issue POB’s.

State retirees get free health care benefits if they’ve worked for 20 or more years. Is it possible to abuse the IL taxpayer any more?

It’s appalling that Pritzker is willing to amend the IL Constitution to raise taxes but not to rein in bloated pensions and free health care benefits.

Many IL residents will continue to relocate out of state. I’ll ask once again: is there a point where IL hits a low threshold of population that will cause the IL pols to make decisions for the majority of IL residents, not just the chosen few?

Greater abuse is indeed possible. In Michigan, for many years. a teacher could qualify for lifetime medical coverage for teacher and spouse provided the teacher reached age 60 and had accumulated 5 years of service. The coverage is fully subsidized for the retired teacher and 90% subsidized for the spouse. If the spouse survives the teacher, the coverage continues for the spouse. Michigan courts have held that health benefits are not a protected contract right, so theoretically this benefit could be taken away by the legislature. However, I expect legislators and judges have benefits that are as (or more) extravagant.

One of the driving forces to high medical bills is prescription drugs costs. This must be addressed on the state and federal levels even if that means buying the medications from Canada which negotiate their drug prices. The other point to be addressed is why do public workers negotiate and get Rolls Royce healthcare when they should all be on the ACA (Obamacare) system. Is it because the taxpayers are paying for it without being represented at the bargaining table? The ACA should be be the primary healthcare offered at taxpayers expense (and the taxpayers should demand it) if they… Read more »

Many drug companies provide discounts to individuals that are not on Government insurance programs. Lantus, a relatively high priced insulin prescription, will pay all of a patients co-pay for the first three months and all but ten dollars on successive months as an example.
https://www.lantus.com/diabetes-savings-programs
Xiaflex is used for non surgical use for dupuytrens contracture. and is very expensive. However they too have a copay program that eliminated any out of pocket costs in my case.
https://dupuytrens-contracture.xiaflex.com/patient/savings/
Look around because there may be savings on drug prices out there.

Watching Illinois deteriorate is like watching a cancer patient go from stage 1 to stage 2 to stage 3 while the doctors charge the patient more each day but offer no real treatment. Now stage 4 is starting and it seems like the doctors are content to let the patient die in agony.