Pritzker’s untruth: Illinois’ budget is billions out of balance

Gov. J.B. Pritzker says Illinois’ budget is balanced ”for the first time in decades.” That’s the claim he made upon signing Illinois’ $40 billion budget for 2020. Pritzker’s claim is simply not true. According to the state’s own actuarial calculations, his budget is billions in the red.

A big reason for the unbalanced budget comes from how politicians account for the state’s retirement debts versus how actuaries do. There’s often a gap of several billion dollars between the two. Hiding that gap has allowed Illinois pols to perpetuate the myth of balanced budgets for decades.

Take Pritzker’s 2020 budget. The state’s pension funding laws, set up nearly 25 years ago by the General Assembly and then-Gov. Jim Edgar, require the state to pay $9 billion* to Illinois’ five state-run pensions in 2020. When questioned why the state wasn’t paying the actuarial amount, Pritzker answered: “We are paying the full payment that is required under the ramp that was put in place in 1995, the statutory required payment” (click here to watch).

What Pritzker’s answer ignored is the amount the state’s own actuaries say is required to properly fund Illinois’ pensions in 2020, an amount that exceeds $13 billion. That’s a total shortfall of $4 billion. 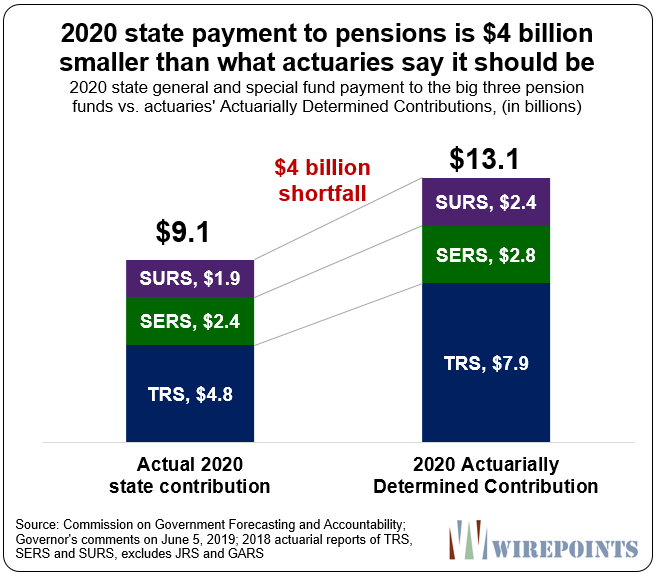 And it’s not just pension payments that are being shorted. It’s also payments for state-worker retiree health insurance that are grossly underpaid.

State actuaries calculate the required payments for those benefits at about $4 billion annually, yet the state has only paid around $1 billion yearly in recent years. That’s billions more in shortfalls that Pritzker’s budget ignores. (See Exhibit 1.)

Defenders of the “balanced-budget” claim will want to paint the above as a matter of semantics. But the billions in shortfalls are not only a matter of accounting. When the state continues to grow its pension promises faster than it can pay for them – and then doesn’t pay enough into its state-worker retirement plans – it doesn’t balance the budget. The state’s debts jump as a result. Illinois’ skyrocketing pension and retiree health insurance debts are the evidence of that.

Illinois not even “treading water”

Despite the fact that Pritzker’s payment to pensions consumes nearly a quarter of the current budget – no other state is in such dire straits – it still won’t stop the state’s pension debts from growing. That’s how sick Illinois’ finances are.

Illinois’ Commission on Government Forecasting and Accountability shows that despite a $9.2 billion** contribution into pensions in 2020, the state’s unfunded liabilities will still increase by $2.4 billion to $139 billion. Illinois is not unlike the financial deadbeat that never pays the minimum payment on his credit card. As a result, its debts just grow.

That tread water amount, however, does nothing to reduce Illinois’ pension debts. Even more, it’s based on the state’s actuarial assumptions actually panning out. If they don’t, then the state’s pension debts will be even bigger.

If Pritzker and team want to make claims of “balanced” budgets, they’ll have to make lots of changes going forward.

For starters, they’ll need to dump the Edgar ramp, which pushes the repayment of pension debts far into the future, requires just 90 percent funding levels by 2045, and assumes overly optimistic investment rates. 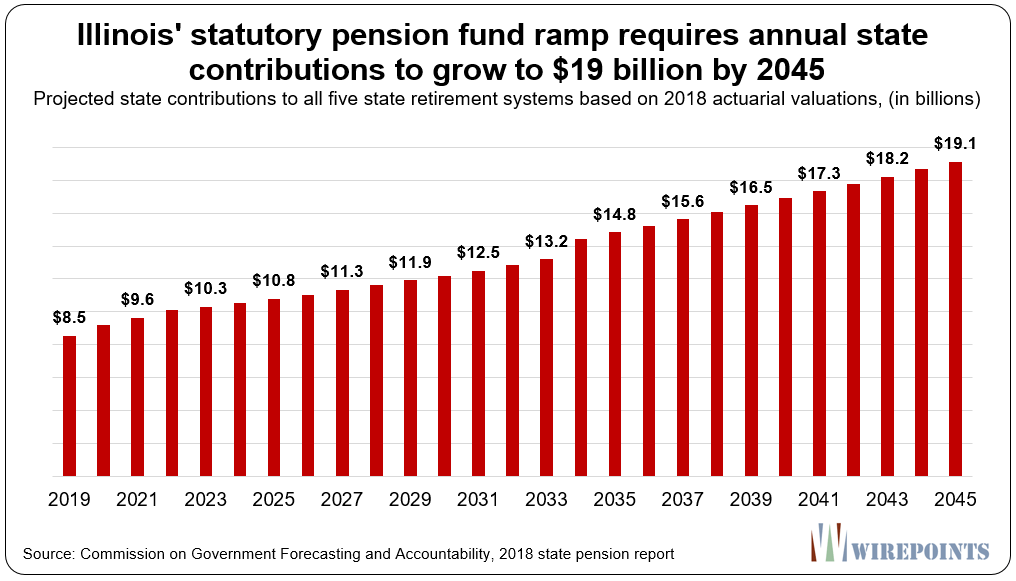 In its place, they’ll have to accept the stricter standards adopted by the state actuaries (see Exhibit 2 for an example of TRS’ standard). Their required payments are larger to ensure the pension shortfalls get paid down sooner. They pursue 100 percent funding targets and accelerate the repayment of debts (TRS’ actuaries target 2035, SERS targets 2040 and SURS targets 2045). And how they account for individual pensions is more conservative (entry age normal vs. projected unit cost). All that results in required payments that are $4 billion larger than the state’s statutory requirements.

But politicians should go even further. While the actuaries still depend on ramps, other financial groups demand the use of less rosy investment rate assumptions and flat debt repayment schedules (level dollar) to determine yearly state contributions.

Wirepoints has covered JP Morgan’s estimates of Illinois’ required payments and ran our own as well, shown below. Those more responsible assumptions would require the state to put even more money into the pension plans. 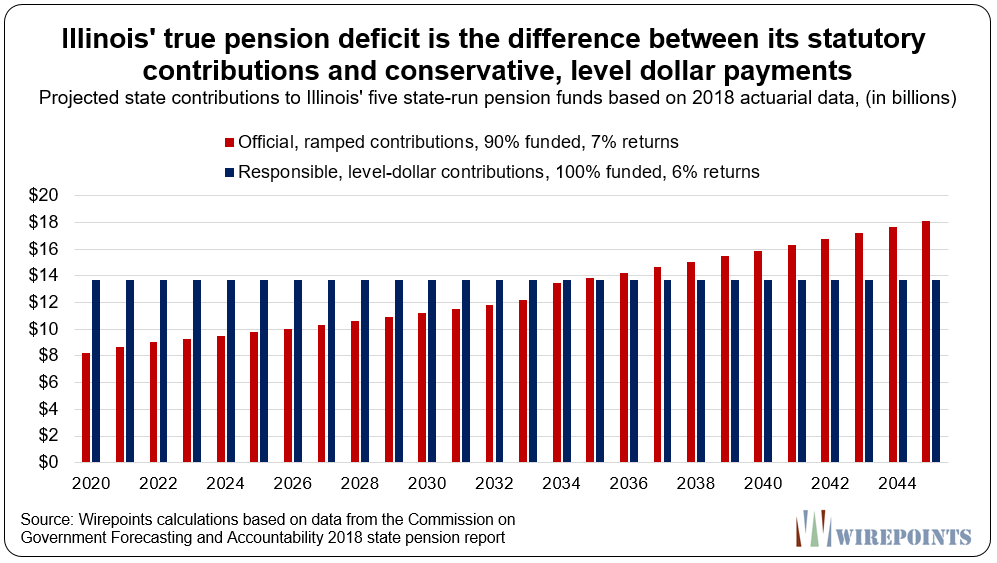 Politicians on both sides of the aisle can pat themselves on the back all they want for passing a budget. But the truth is they’ve just made Illinois’ debt crisis even worse.

They’re not paying what they should, nor have they passed a single structural reform that would help lower the annual cost of retirements. (In fact, they’ve done the opposite by reboosting pension spiking for teachers.)

Illinois fiscal reality won’t change until the state is more honest about its debts and it reduces those debts through structural reforms.

*The state’s contribution includes $8 billion in money from the state’s general fund budget and an additional $1 billion from other special funds.

Read more about how politicians mislead Illinoisans about the impact of retirements on the budget: 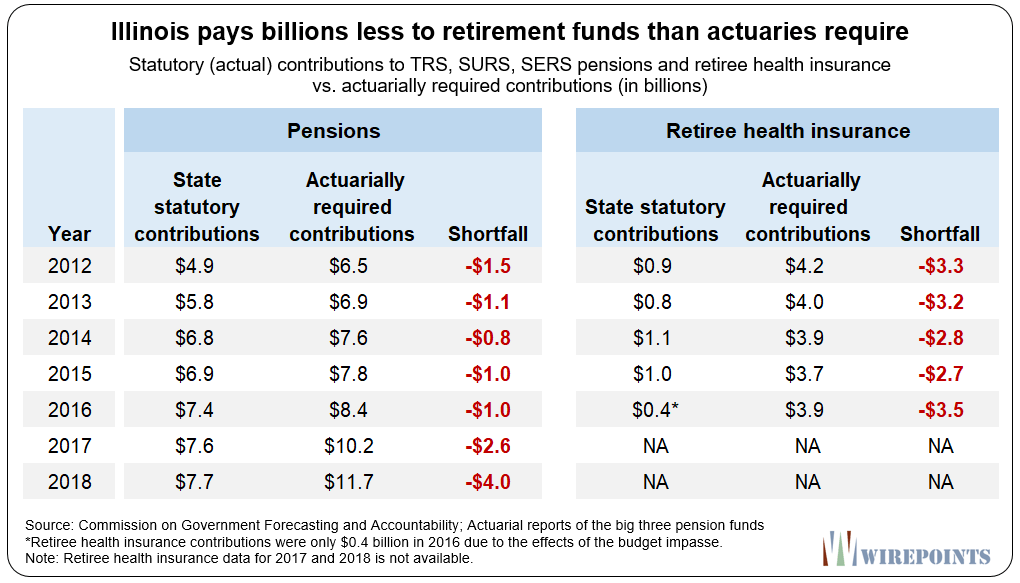 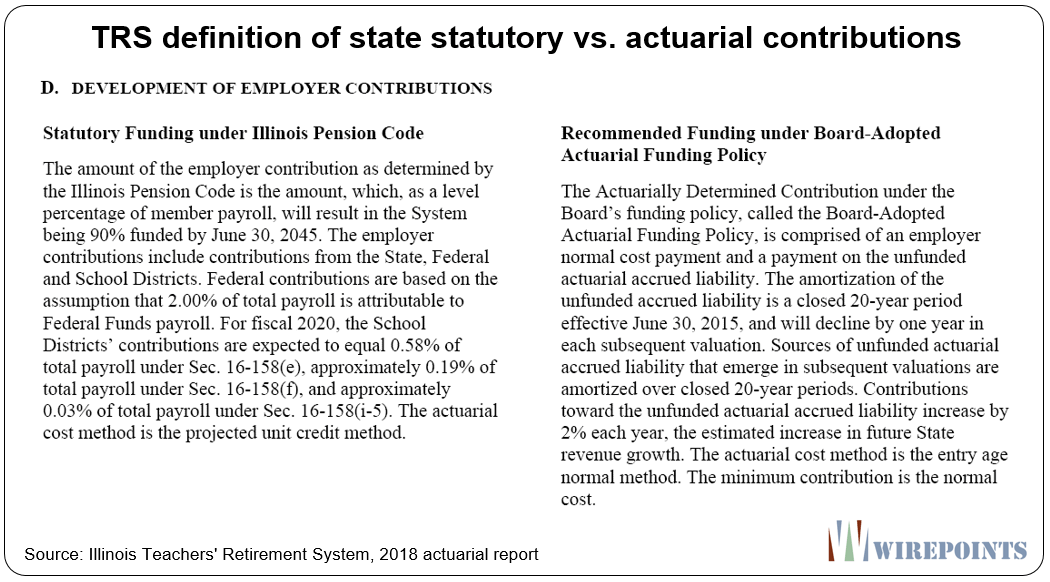 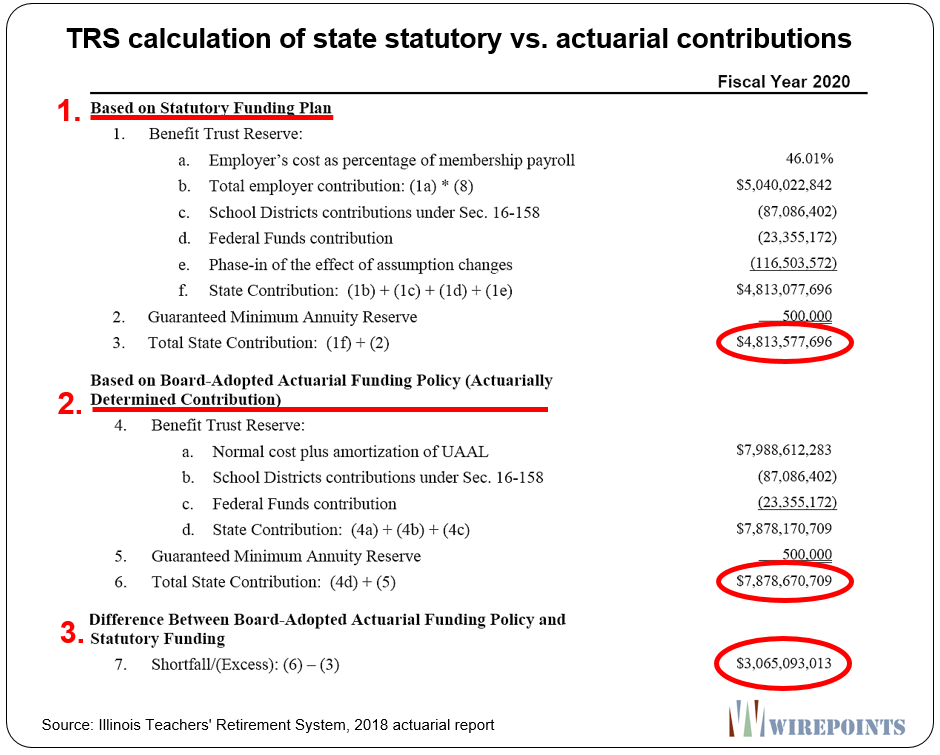 The problem too is that “actuaries” in Illinois couldn’t find their butts using both hands and a mirror. They are the ones who largely got us here.

He meant to say that the Ponzi scheme is in balance, the millenialls and their kids are an endless supply of ponzi’s.

This is surely a sign that progressive politics will overcome all financial ills.

That might be too powerful of a narcotic for citizens to resist.

What do these politicians care? They won’t be in office when the stuff hits the fan.

I got out of Illinois in October, 1980. Never regretted it.

What the hell do union leaders tell their constituents? It’s ok? Don’t worry, nothing wrong here? It’s just your pension, don’t worry. ? When these pensioners are left with IOU’s you’d expect a few of the stewards to be resting right next to Jimmy Hoffa. You’d think there would be a huge uprising to explain where this disaster goes. Either that or these pensioners are just sticking their head in the sand. Or do they really think taxpayers are going to stick around to pay their pensions? Haven’t they noticed the IL residents exiting stage left? And right? And north?… Read more »

Its just a game of hot potato for these clowns that call themselves the servants of the people. Bullshit, they take their piece of the pie and pass the buck onto the next guy. I am convinced this will continue until States collapse 1 by 1.

I worked for a company that was financially suffocating. The owner said company is profitable, but paying the bills became dreaded. Didn’t pay one huge invouce for 10 months. When that paid, started to withhold payments to 10 smaller vendors for approximately the same amount. Three months behind on rent. The business had loans on AR, inventory, equipment, and personal guarantee loans too. Illinois has been doing this for maybe 20 years. Who knows for sure. So many local governments here doing the same.

The budget is probably balanced in favor of the State but UNbalanced to the detriment of taxpayers.

Not to mension, per tia, state still hasn’t released 2018 cafr..how do you claim balanced budget when you havent revieled the financial statements from the year before?? Zero in press as usual?

March 29, 2020
The full financial and economic impact the Coronavirus will have on Illinois is impossible to predict. For now, Illinoisans can keep an eye on the state’s $7.5 billion unpaid bill backlog to see how the state's finances are holding up.
View Comments | Add Comment