Illinoisans are suffering under one of the worst housing recoveries in the nation. Since 2005, Illinois property values are up just 6 percent, far below the national rate of more than 30 percent, according to data from the U.S. Census Bureau. In contrast, states like Tennessee, Colorado and Texas have seen their values rise 45 to 60 percent.

That stagnation has done serious harm to Illinoisans’ nest eggs, considering most people have a large share of their retirement savings locked up in their homes. Wirepoints covered the damage extensively in our report: It’s not just property taxes Illinoisans should be worried about. It’s their home values, too. See the 50-state chart in the appendix.

But if that information wasn’t depressing enough, it turns out Illinoisans have even more to worry about. Consumer finance company GOBankingRates recently released a report titled 50 Housing Markets That Are Turning Ugly, which ranks the fifty municipalities across the nation that are most at risk of a housing market downturn. Nine Illinois cities made the list.

Peoria, Aurora, Elgin, Decatur, Joliet, Rockford, Champaign, Plainfield and Naperville are all in serious risk of trouble should a downturn occur.

Overall, Florida had the most number of cities in the top 50. Illinois had the 2nd-most.

GOBankingRates measured each city’s foreclosure rate, the percentage of underwater homes, change in home prices over the past two years, among other items. (See GOBankingRates full methodology in the Appendix.)

As it turns out, homeowners in Peoria, Illinois are the most in trouble. The city’s housing market ranked the worst out of the 500 cities evaluated across the nation. The city has a sky-high foreclosure rate of 1 in every 932 homes, 21 percent of its homes are underwater – double the national average – and home prices have declined 16 percent over the past 2 years.

Illinois’ Aurora, Elgin, Decatur, and Joliet were also in the top 20 “turning ugly” cities. (For information on all 50 cities, see the Appendix.)

One surprising Illinois city that made the list was Naperville, which ranked 46th out of the 50 municipalities. The city has a reputation for being one of the most well-off places in Illinois, yet more than a quarter of all listed homes have cut their prices and the average price of property has fallen by 2.2 percent in the last two years.

Property values: one problem among many

Illinois’ anemic housing market has already done serious damage to Illinoisans’ net worth. According to data from Zillow analyzed by Wirepoints, since 2009 alone residents have lost out on more than a quarter-trillion in property appreciation as a result of growing far slower than the national average.

The state’s home price stagnation is a symptom of some of the state’s biggest problems: record out-migration, the nation’s highest property taxes, overwhelming government debts and shrinking real incomes. Illinoisans and their retirement nest eggs are being punished by the state’s failed policies.

Don’t expect that to end anytime soon. The only “solution” Illinois politicians have for Illinois’ woes at this moment is a progressive income tax scheme. That’s destined to only make things worse. 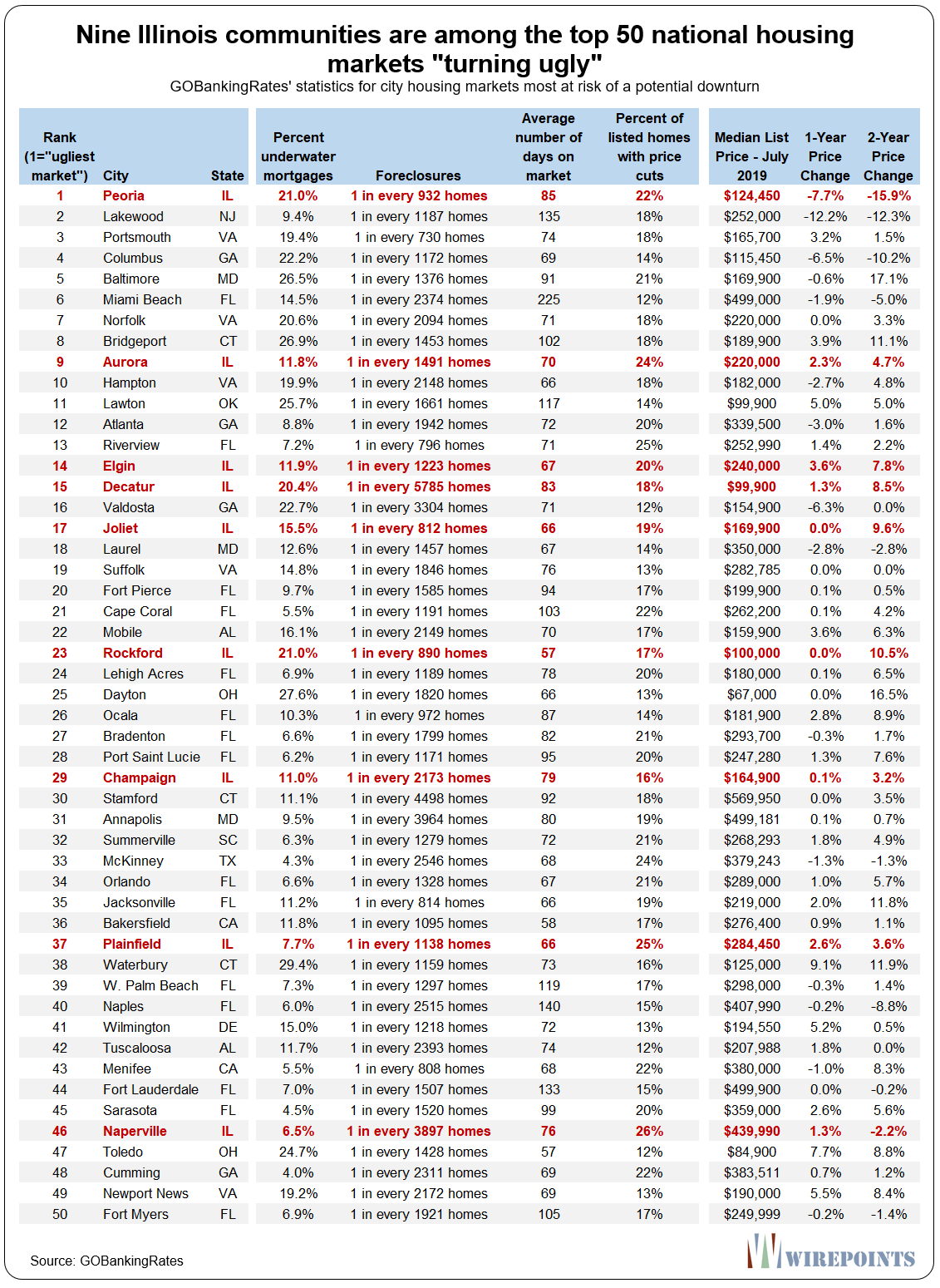 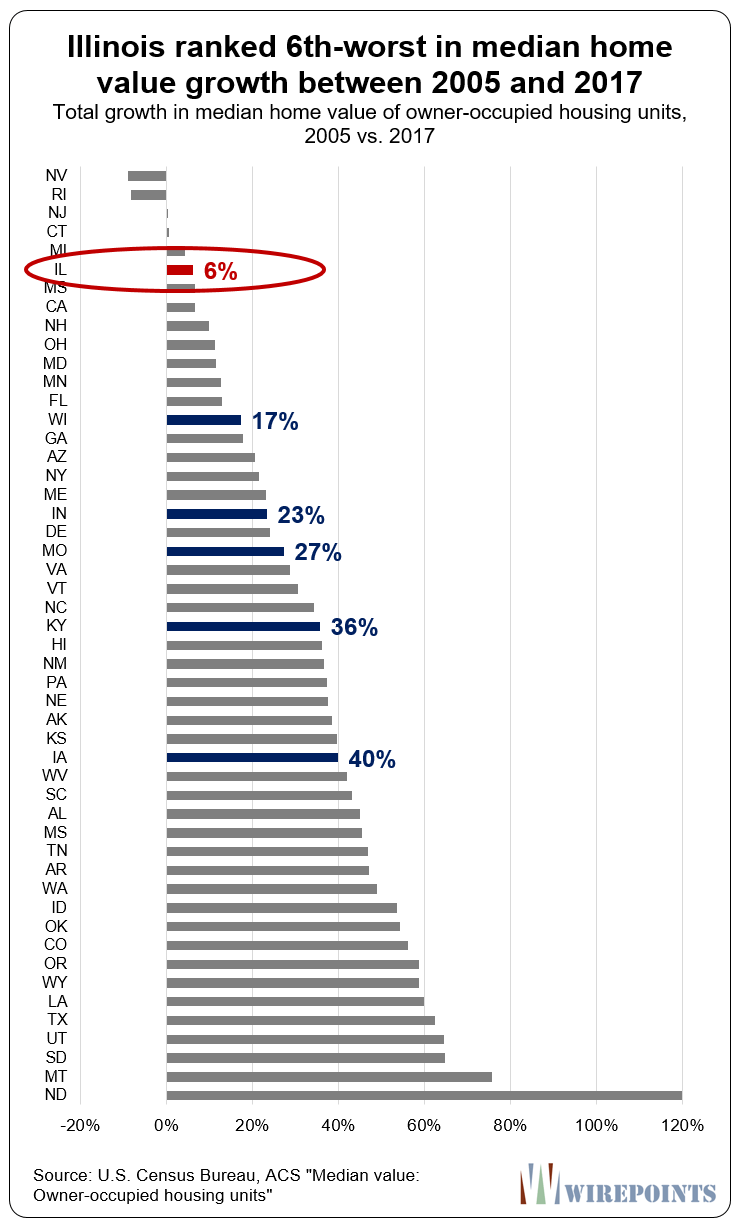 I carry my home in IL at a mental value of $0. That way, if tax rates rise to the point where market value begins to spiral into collapse, I won’t have a stroke. Sadly, I have family members who’d be financially crushed by a housing value collapse, but there’s not much I can do about that. The odds of IL politicians wisely and coherently defusing this time bomb are, in my view, less than zero. Citizens are addicted to insane promises, and vote into power the cretins whose promises are the most insane. I’m surrounded by fools more concerned… Read more »

To be fair my rental home value in Rockford went up 6.1% as did most homes here. Will this translate to higher tax’s??? I still will pay at least $6,972 which is 4.1% of total value ($172K). It is true that building equity is almost impossible due to high tax’s and money is diverted to the tax’s from what could be equity.

I’m unloading my Rockford homes as fast as I can; I’m getting less now than what I paid for them over a decade ago! The taxes are not the problem — the city is.

At what percentage (taxes/appraised market value) would you decide that owning property in Rockford no longer made sense? Just curious enough to leave a rhetorical question.

I just took a day trip to Rockford for business reasons; it’s been a while since I’d been there. Holy moly, the city proper is practically abandoned. There are so many abandoned buildings they mark them with red signs on the doors. I didn’t realize Rockford was that bad. Even the downtown, while quaint, is falling apart, with empty storefronts everywhere. It’s sad actually, very sad what has happened to a once great mid-sized industrial city in Illinois. that city literally has no hope, no future, just get out as quickly as you can and move to beliot.

This is great to hear! I love knowing that housing will likely remain affordable in Illinois in the years to come.

Vote Up2Vote Down
world with end

I know you’re being tongue-in-cheek; so, you know that the good news is that you’ll get a good deal on a house, but the bad news is that no none will want to live there due to lack of a sufficient number of good jobs, lack of properly staffed police and fire protection, etc.

I don’t understand why Florida has so many cities on this list. Any thoughts?

Florida is a bit frothy and has has a history of property speculation. But it’s population trajectory has continued unabated for decades. I’m no Florida fanboy but people continue to move there.

And count me in as one of the many who will be moving there. Florida’s finances are way healthier than Illinois’, as has been pointed out on this blog many times.

Supply and demand. Lots of second homes in Florida. In the downturn, lots of people couldn’t afford those second homes, flooding the market, including foreclosures. The market is still absorbing all of that housing.